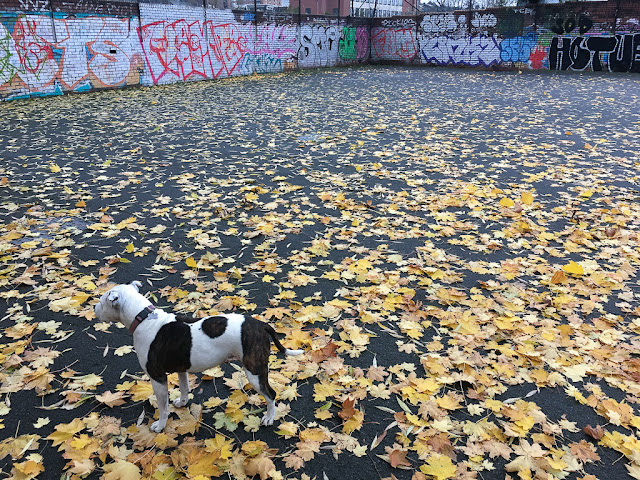 Looking at this picture, which I took on Olga's walk yesterday morning, you can get a sense of why dogs (and other animals) evolved with spots. They're pretty effective camouflage. Doesn't she blend in with the urban jungle?

We had a fairly lengthy walk, around the nearby council estate and along the Black Path, and eventually to Fortune Green and the cemetery. It's a good thing we walked so much so early, because by the time we headed home, rain was coming down and it pretty much continued all day. 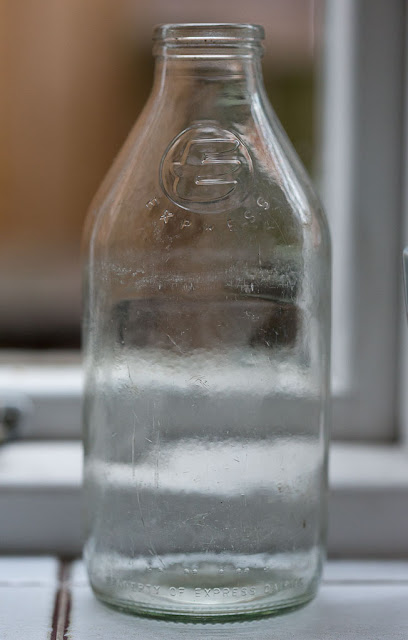 I found another interesting old bottle along the Black Path -- this one an Express Dairies milk bottle. I have no idea how old it is -- from some online research I learned that Express (which apparently no longer exists) used that E trademark for decades, from the '70s right into the early aughts. Here, for example, is a photo from 1978 showing trucks outside a loading dock all bearing that same logo. So I'd guess it's at least a couple decades old. It has joined the bottle parade on the kitchen windowsill.

Thanks for all your input on the mystery plant in yesterday's post. I've decided that it's borage. I was confused by that strong stalk with no basal leaves -- all the borage we have elsewhere in the garden has a bunch of leaves at the ground, with flower stalks rising up in spring. But here's what I realized during some late-night Googling: the plant I thought was borage, and which we have all over the garden, is actually green alkanet, a close relative. So the mystery plant, then, must be true borage.

I'm not sure it's going to survive for long in that pot, because apparently borage forms a taproot and doesn't do well in enclosed containers. But I'm going to let it go as long as I can, just to see what happens. The passionflower vine is mostly dormant now anyway, so I don't think it will suffer, and in spring we can pull out the borage and give the vine back its pot.

I spent almost all of yesterday afternoon reading "The Story of Harold" -- the book I suffered so much drama ordering from Amazon. I'm not sure it was worth it. It's kind of a yucky book, and George Selden's writing style -- with lots of asides, parentheticals, exclamations -- gets a bit exhausting. He was much more focused in his children's books, like "The Cricket in Times Square." I use the word "yucky" because "Harold," published in the early '70s, is definitely a dated expression of the free-love, swinger culture of the time, with a fair amount of vivid sexual adventurism. Like leisure suits and sideburns and key parties and Hai Karate, it seems kind of gross now.
Posted by Steve Reed at 7:53 AM

The Express Dairies bottle reminds me of the days when glass bottles of milk were delivered to the majority of British homes every morning. Was this the same in America? Here you couldn't even buy milk in shops or supermarkets.

Just like YP, I remember when milk was delivered to the door and the milkman would knock for his money each Saturday.
You would leave a note out in the bottle if you needed a loaf or other grocery item that he carried.
When I was at home my Mum would buy what our milkman 'George' would call 'Jungle Juice'. This was a small bottle of orange juice with all the bits in, pukker stuff. Probably wouldn't be pc now to call it 'Jungle Juice'.
Thanks for the advice on comment moderation Steve, I'm going to leave it for a bit and see what happens.
Fab photo of Olga.
Briony
x

"A Perfect Walk!", Says Olga. " And Thanx For Noticing My Dots Of Pigmentation." She Adds. I Imagine Her Singing While Prancing Along The Path," I Am Sexy And I Know It." ( The Famous LMFAO Tune )

Nice walk with Olga. Reading YP's comment reminded me of the bottles of milk we had delivered to our front door in the mornings in New Jersey. We had a milkbox that was big enough to hold a gallon of milk. I think that stopped in the early 1960s. I am also reminded of milk vending machines on street corners in the city of Newark.

back in my early 20s in Houston, almost 5 decades ago, you could still get milk delivered to your door. I read somewhere that they started doing that again in England, not sure what part though.

Olga does blend in rather well in that surrounding. Another great milk bottle. I'm starting to see milk in bottles again in one of the stores I go to.

I loved The Cricket in Times Square, which I read for the first time about a month ago when a copy came in a donation to the used book store I manage at our local library. The story is...sad...but children's books used to be much sadder in the '60s. the Garth Williams illustrations are perfection.

Now you say that the author was a swinger?? Ew. EW. EWWWWWWWWW.

We also got a donation that contained a copy of that '70s book, Open Marriage, and the co-authors were husband and wife and he wore what I think the swingers used to call a "safari scarf". EWWWWWWW.

The glass bottle is like the ones that our milk used to be delivered in, back in the forties and fifties. Good memories. I almost looked that book up B. So glad I did not. You have a wonderful day, hugs, Edna B.

I had forgotten about Hai Karate. That's a good memory to forget! Sorry the book was disappointing.

Milk was delivered here as well. I can remember it definitely in the 60s which were my at-home growing up years in the village. The milkman came by in a little van with a door, similar to a bus door. My mother would leave a note for him if she wanted something other than the usual order of x bottles - for instance, cream at Christmas time to make the whipped cream and other cream-based ingredients for her special Christmas dessert. The bottles were stoppered up with a little cardboard disc with the dairy name on it. In winter, sometimes the milk would start to freeze and push up the disc. In later years, the top of the bottle, disc and all, was covered by another layer of protection, a heavy white paper that was pleated into a snug position around the neck of the bottle. Ahh, memories :) Your bottle collection is growing!

Love the picture of Olga, and also the one recently of her under her pink blanket - I don't think I ended up leaving a comment on that post.

Is Olga in that photo? I just see leaves and dots. Well done OLGA!

The photo of Olga is spot on! Every walk an adventure.
Glass bottles are so interesting. I can remember as a child when we would gather discarded soda pop bottles and get some change to spend at the movies or for candy. Plastic is destroying our planet.

Ooh- I want to read that book! I'm reading TC Boyle's "Outside Looking In". It's about the very early LSD experiments run by Timothy Leary. Not quite the same era but close. A sort of lead-up to what you're describing in "The Story of Harold."
So speaking of camouflage- August was there this afternoon when Mr. Moon left to go hunting in his camo. August looked at his grandfather and said, "Boppy, the deers can still see you."
Haha!
He's right.

Love Olga among the leaves. Well, I love her anywhere, actually.

My grandfather ran a dairy farm. I think I have one of the cardboard disks from the dairy somewhere around here.

YP: There was a time when milk was delivered in America, too. But I only ever remember us getting milk from the supermarket. The idea of a milk man always seemed rather mysterious to me.

Padre: Oh, she knows it alright. She is spoiled and deservedly so.

Robin: I think I remember milk vending machines, but you know, I'm not sure!

Ellen: Yes! Here in London, in fact, we could get milk delivery. Dave has talked about it but aside from employing the milkman, I really don't see the point. The supermarket is cheaper and it's right around the corner.

Red: Glass DOES stick around forever, but at least it's environmentally benign and will eventually become sand again!

Sharon: Apparently a local dairy produced milk for Whole Foods and sold it in these old Express Dairies glass bottles. I don't know how they found enough of them!

Vivian: I loved one of "Cricket's" sequels, called "Harry Cat's Pet Puppy." One of my favorite books as a kid. And yeah, I am honestly not a prude, but there's just something gross about that whole swinger movement. It seems very sweaty and greasy and hairy, "safari scarfs" and all! Bleah.

Edna: Yes, you're fortunate to have skipped this book! Ha!

Allison: My stepbrother had a bottle of "Hai Karate" when we were in middle school.

Jenny-O: Love your description of the milkman and his deliveries. It's funny how I have no memory of milkmen at all. I think I must have just missed this phenomenon.

Penelope: Yes! My brother and I used to collect bottles and take them to the store, turn them in and buy candy or a can of soda. I remember sometimes the stores wouldn't take them if they were too dirty.

Ms Moon: I read that book and LOVED it! In fact I've recommended it to many people at the library. Love August and his truthful powers of observation!

Bug: She's pretty lovable. You should post a picture of that disk if you find it!