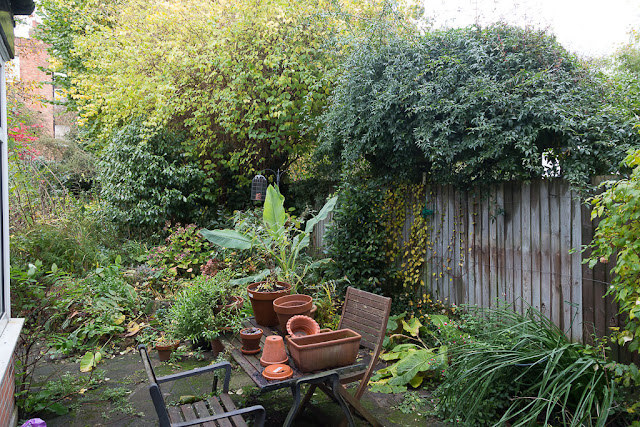 So here you go -- a quick look at our tree-trimming adventures!

First, the patio. The neighbor's climbing rose was encroaching over the fence (right) and the camellia was being engulfed by the gigantic mock orange (or Philadelphus). 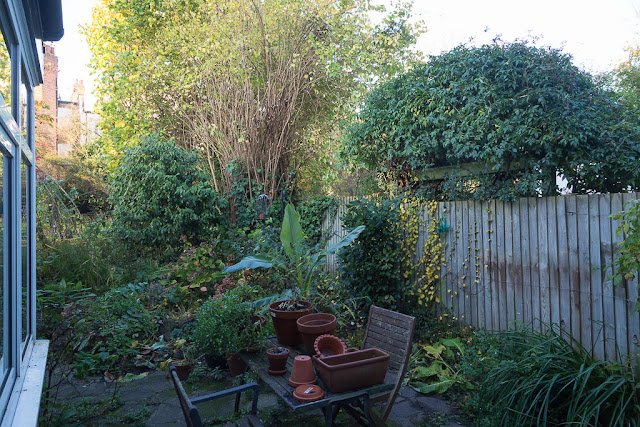 The trimmers, as you can see, cut the rose off at the fence line and substantially trimmed the Philadelphus to get it away from the camellia. At the same time, we tried to leave it as rambly and tall as possible because the birds like it and there are several old nests in those tall branches. 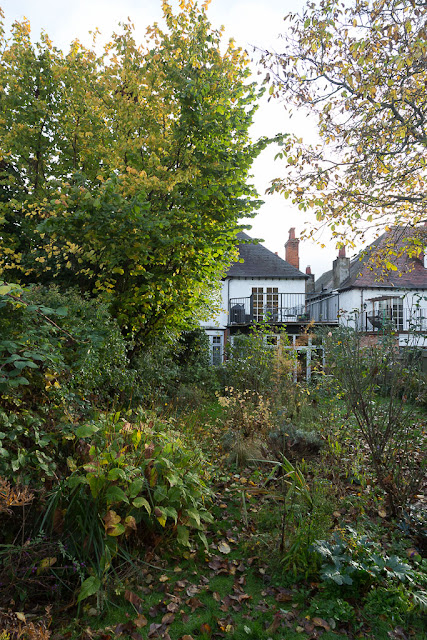 Second, the hazel (at left), which as you can see was growing outward and casting shade over the garden. It was almost touching the branches of the walnut. 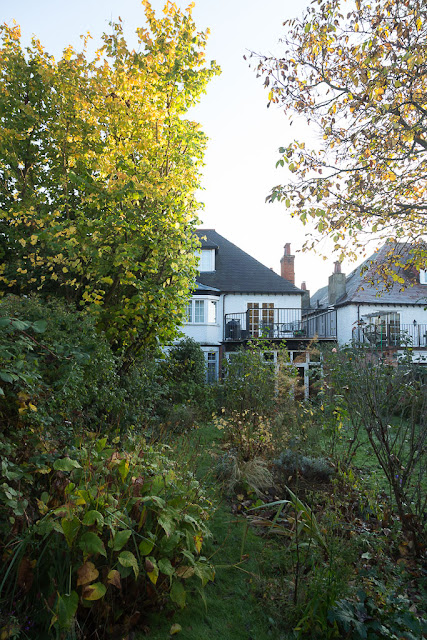 Now it's been cut back to give more light to the garden. 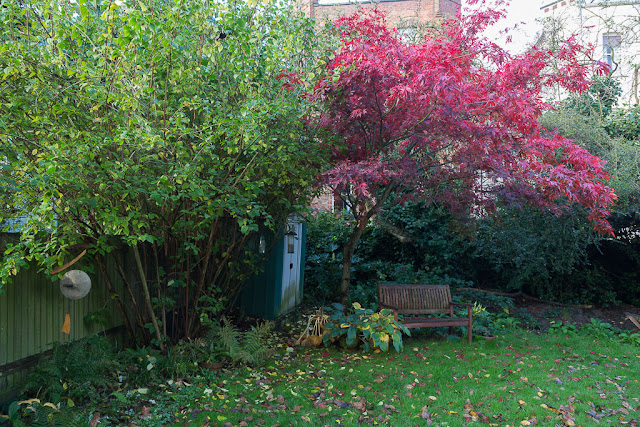 Finally, the Philadelphus in the back, near the Japanese maple, had practically taken over. 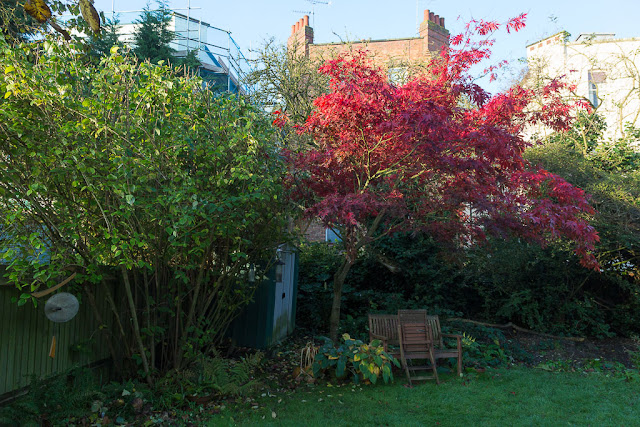 We had it substantially reduced in height and pruned away from the maple, so the maple can get more light and show off those flashy red leaves!

There was some other work as well, but that's the bulk of it. As you can see, we didn't opt for any radical changes and our garden is still quite shrubby, which is great for the birds and critters. The tree crew did do a great job -- better than we could ever have done, given the height of some of the work -- and they also raked the lawn! Bonus!
Posted by Steve Reed at 6:51 AM

These pairs of pictures are like those "Spot The Difference" images. For a few moments they had me completely stumped. It's like the trees and shrubs went to the barbershop and asked for "a light trim".

That Japanese maple is gorgeous.

They tree trimmers did a good job. I can't get over how big the neighbor's climbing rose was. Holy crap! Roses don't do as well here. My mum was a lover of roses, I think they reminded her of home.

looks good. we had a guy come trim some branches off our magnolia that were growing over the roof and brushing the shingles. we weren't there when he came and he decided to cut all the lower branches all the way around as a bonus at no extra charge. it was years before any of the branches got low enough for us to be able to reach and pick the flowers again. now when we have any tree work done I make sure I'm there.

Such a lovely transformation. They did a wonderful job on the trees and shrubs. I love your Japanese Red Maple. I have one too, and it is just beautiful. Hopefully, things will take a while before growing out again. You have a wonderful day, hugs, Edna B.

It looks very nice. You were smart to get some professionals out to trim things up. They do a good job and they clean up after themselves. It's a win win.

They did a great job. Didn't take too much, just trimmed and left it with more light and looking lovely..

It's a tough decision to cut plants back but we need to give all plants some light.

A win for both humans and birds!

They did a great job, didn't they - just like a good haircut: not so short that people know you had one, just tidying things up and making it all look good!

What a nice big back yard complete with a garden and trees. I would love a big rambling back yard but not sure that I could care for it properly anymore. I do good with a few pots here and there so I enjoy looking at yours before and after yard work.

Been busy here but that is nothing new at the moment. We are working in the garage and going thru lots of boxes and gathering things to give to my daughter. I might have mentioned that they lost everything they owned last February during a gas explosion. Thankfully they were all ok but the fire department drenched everything that was salvageable. They are starting over now and can use our cast offs to get started.

Nicely...and not over-, done. You can always take a bit more off in Spring if branches are winter damaged

Wow. That's a whole lot of garden. It must be stunning in the spring.

They did a lovely job on your trees and shrubs. Not too much and just enough. I would think it makes a lovely spot for reflection and for Olga.

Your shrubby garden is lovely. Did they also trim the encroaching plants on your front stoop?