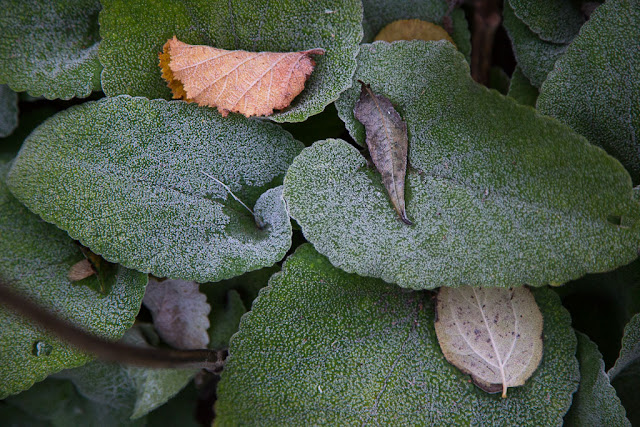 We had a chilly morning yesterday. There was frost in the garden when I looked out shortly after sunrise, and Olga acted like I was torturing her by making her go on a walk. She kept digging in her heels and trying to turn for home. Finally, after (ahem) essential bodily functions had occurred, I gave in and we went back. 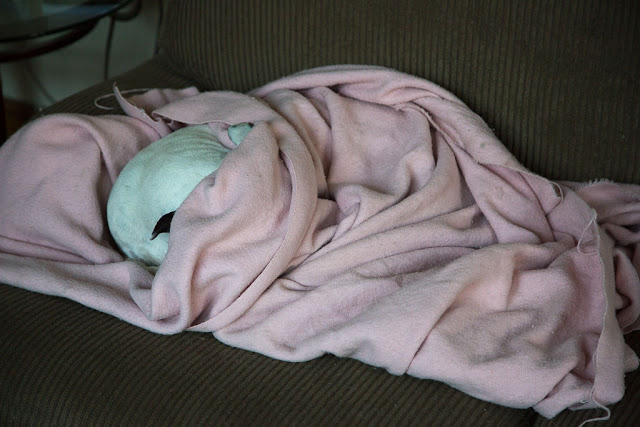 She promptly got on the couch and hid almost entirely under her pink blanket. She wanted nothing to do with the cold.

Last night I went with Sally and Mike to see Björk in concert at the O2 Centre (also known as the Millennium Dome). Dave didn't come -- he's not very interested in Björk, and when I asked him to name a Björk song, he responded with a string of syllables that sounded like they came from the Swedish Chef.

But I've been a Björk fan since buying her album "Debut" back in 1994. It was widely advertised on posters in Spain when I traveled there with my friend Arthur that year -- in fact I remember being in a hotel room in Granada watching her video for "Violently Happy" on the TV. To this day it's one of my favorite Björk songs.

Anyway, her concert was a brightly colored, digitally enhanced spectacle. Photography was prohibited but I don't think Björk would mind me providing this 50-second teaser:

That's her in front, looking like a big white exotic bird or feather duster. Her voice hasn't changed a bit over the years.

She only played a few songs I knew: "Isobel," "Pagan Poetry," "Hidden Place" and a bit of "Venus as a Boy." I say that a bit reservedly, though, because although Björk doesn't sound like the Swedish Chef (and why would she -- she's Icelandic), she does have an accent and I often only understand every fourth or fifth word.

The concert, called "Cornucopia," focused on nature and the planet's ecology. A message about climate change scrolled across the screens in front of the stage, and later a video of Greta Thunberg speaking directly to the crowd. And of course everyone cheered the message, but I couldn't help thinking, here we are in this gigantic arena using untold kilowatts of electricity and drinking from our plastic cups. The message sounds good, and in fact it is essential, but acting is so much harder. It's not Björk's fault. It's just the way we live now.
Posted by Steve Reed at 6:33 AM

"Essential bodily functions occurred..." Why on earth didn't you use your toilet before taking Olga out?
"Photography prohibited"...My moral compass has obliged me to signal your breach of regulations to Bjork's management group and indeed to The O2. Sorry but I stand on the side of justice and rightfulness...like Batman.

Really? Why can't you take pictures at a concert, for god's sake? I don't get it. In New York State (where I live) a man who was photographed walking in Times Square sued the photographer, who had published the picture in a newspaper article about NYC,because the photo showed him with his lady friend who was not his wife. The case went to the NY State Superior Court, which decided against the plaintiff, adjudicating that in New York State a person in public has no expectation of privacy therefore, the photo was reasonable and lawful. I think it should be the same thing when you're in a venue with 20,000 spectators.

Olga looks adorable burrowed in er pink blankie. She's very cat-like that way. Maybe you can train her to use a litter box?

I don't think I've ever heard a Bjork song in my life. Not that I was aware of. But I'm glad you got to go and have fun. Your observation about energy use is spot on, though. Still- what can we do?

me and Minnie are with Olga. Minnie has to be desperate to go out in the cold. I've never heard of Bjork.

I love the photo of the plants with the frost on them. And that photo of Olga is priceless. Yup, maybe she would like to have a sweater or two. As for Bjork, she's not my cup of tea, but the video was interesting. I'm glad you got to enjoy the concert. You have a wonderful day, hugs, Edna B.

The way we live now!
Good one.

What Trollope said in his autobiography of why he wrote that novel reminds me of our technicolor doublespeak, e.g. Budweiser spending million$ on a Superbowl commercial trumpeting that it had given away free water during some crisis,
. . .and of course the man he describes is all too recognizable:

"If dishonesty can live in a gorgeous palace with pictures on all its walls, and gems in all its cupboards, with marble and ivory in all its corners, ... and get into Parliament, and deal in millions,
then dishonesty is not disgraceful,
and the man dishonest after such a fashion is not a low scoundrel. Instigated, I say, by some such reflections as these, I sat down in my new house to write The Way We Live Now."

Olga and I have a lot in common...we both hate the cold. I probably have the same opinion of Bjork as Dave however, I'm very glad you got to see her concert.

I love Bjork and would love to see her live. Lucky you! And Olga is adorable under her blanket!

I'm with Olga on cold weather. And with Dave on Bjork.

Frosty mornings are so pretty, but not always fun for a walk. I've never listened to Bjork, and I like your observation about our eco footprint even in these moments.

Olga and the pink blanket! Too cute. The cold can affect people and animals differently. Please check out the brand Carhartt and choose one for her. It is a popular item here in frigid Montana. Very durable, washable, and warm as toast and hot chocolate.

Olga is very sensible! On the other hand essentials are essential.

John: 'Tis the season for Iceland, I guess!

YP: I knew you were going to say that about the bodily functions, LOL!

Vivian: I hadn't heard about that case, but yeah, my understanding of the law is that if you're in a public place, anyone can legally take your photo. Otherwise, journalism could never happen.

Ms Moon: I just assumed everyone knew Björk, I don't know why! Clearly, from the comments here, that's not true.

Bug: Olga HAS a sweater growing from her skin!

Ellen: Olga doesn't usually refuse to go out just because of cold. Usually it's rain that puts her off. I think she's getting more sensitive in her older age!

Fresca: Coincidentally I bought a copy of "The Way We Live Now" not too long ago, at a thrift shop or somewhere. I'll have to read it!

Sharon: Unfortunately Olga hates the heat, too. She is not a creature of extremes.

Jennifer: It was definitely an interesting show, although most of the music was stuff I hadn't heard before.

Catalyst: Well, we can't all love her, right?!

Robin: It really crystallized the dilemma humanity faces. Here were thousands of us all together, all sympathetic to the climate message, and yet, doing things the same old way. It's very hard to change the bigger system even when you recognize that change is needed.

Penelope: Is Carhartt a blanket or a dog jacket? In any case, I'll check it out! Fortunately England gets nowhere near as cold as Montana. The coldest we get in the winter is down into the 20's, and that's pretty unusual.

Carhartt makes all sorts of great items. I can attest to the quality. Everyone here is a satisfied Carhartt customer. But I was referring to the dog coats. I have two Carhartt coats and love them. Same material as the dog jackets. They last forever.

The tan color is sort of the status symbol, at least here, and the dog blanket is on my Xmas wish list for myself. They have a sleeping pad and a bed for pets. Even protection for your car seat. Just a darn good product. Get a hoodie for you and Dave!

P.S. I liked reading Barchester Towers but got bogged down in The Way We Live Now---however, I would recommend the wonderful BBC series, with David Suchet (and some other good actors), if you like that sort of thing.

So glad you got to go to the concert I love all things Bjork saw her many years ago love her creative energy.