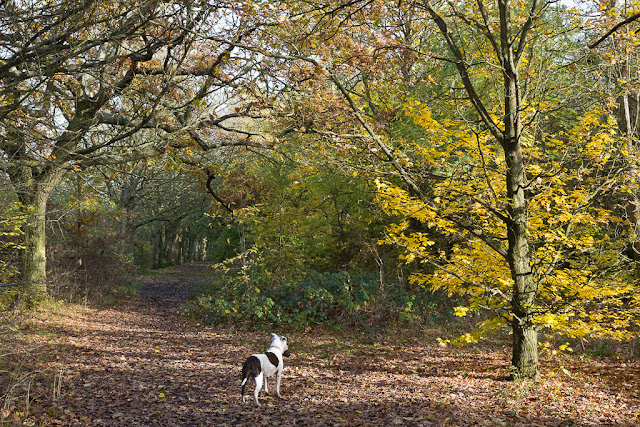 I spent yesterday morning cleaning up the garden. I raked up the fallen walnut leaves, which have a wonderful spicy, aromatic smell. I wish I could describe it. I left behind the red leaves from the Japanese maple, because they look so nice on the lawn! Eventually they'll turn brown and I'll move them all to the side where they can compost.

Then I took Olga back to Wormwood Scrubs. I ran into some kids from school while waiting for the train, which was pretty funny -- introducing students to Olga. I think they liked her much more than they like me! She, of course, was mostly interested in the food they were carrying.

She and I had an extra-long walk, along the canal and through the woodsy areas of the park. 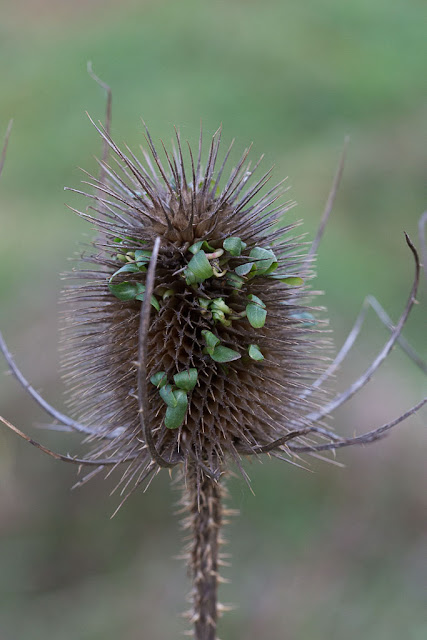 I discovered seedlings sprouting in the dry heads of the teasels, a phenomenon I don't remember ever seeing before. I'm not sure these plants will ever survive -- maybe they fall to the ground and take root? I wonder if this happened because it's been so damp. I kind of wish I'd taken a head home with me so I could try to root them for our garden. 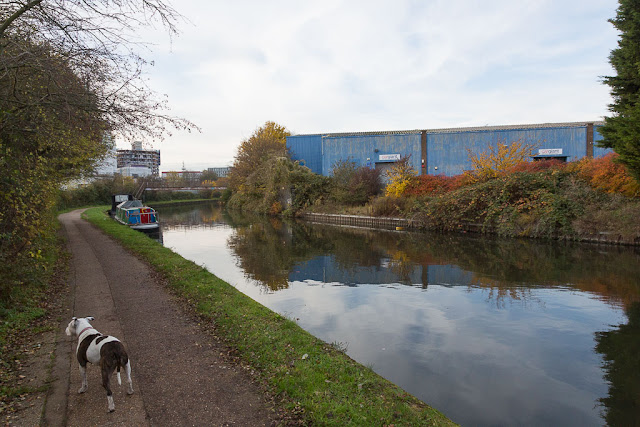 Then we walked back along the canal and to the Willesden Junction train station, where we caught the train home. By that time Olga and I were both dragging! I have no idea how far we walked, but we don't normally do the canal twice. For once I wish I'd had a pedometer.

Last night Dave roasted a chicken and we Skyped with his mom before watching more of "The Marvelous Mrs. Maisel."
Posted by Steve Reed at 6:35 AM

If the kids do like Olga more than you, perhaps you should swap roles. Olga could sit behind the library desk with her tongue lolling out while you spend the day wagging your tail on the sofa.

I have always like the idea of walking alongside a canal, sadly we do not have any down here but the sea sort of compensates.
Always good to see Olga.
Briony
x

That is a wonderful series! Olga's always a charmer.

Of course they liked Olga! She's a dog and adorable.
Sounds like a really nice Sunday.

I like knowing that the students liked Olga. They got to see the furry side of your life. Sweet!

I love the way Olga is busy looking into the brush in both of these photos. She seems to be ever vigilant to squirrel sightings.

I know the kids had no idea you had Olga in your life. They thought they were the only one. (lol) Yes, children do love animals. I've never met any who didn't and animals love the kids too. Olga was enjoying her long walk. Mine are so small I ride them in a stroller. Milo will run and walk but Queen and Babs will sit down on you. I bought a twin stroller to ride all 3. I need it when I take them to the vet for their annual check up and shots. I have to control 3 which they are very discipline. I hope you and Olga have a beautiful and healthy day.

Meeting students in other places than the school is interesting. Sometimes they see you and are too shy to talk to you.

of course they like Olga better then you you symbol of authority you.

Those photos of Olga are a stitch. And that teasel looks similar to a thistle. I wonder if they are from the same family. BTW, I got "The Diary of a Bookseller" from my local library and am enjoying it greatly, even though it does bring up memories of many of the bad "customers" we encountered in our bookstore. Thanks for mentioning it.

Love the Olga sightings - her markings just make her so photogenic. I'm frankly shocked you DIDN'T bring a teasel head home with you. What in the world! :)

I don't think I've ever seen a teasel. I did just look it up on Google though. It is quite interesting to look at. Your Olga sure takes beautiful photos. I love the photo by the canal. You have a wonderful day, hugs, Edna B.

An interesting series of photos, as always!

As a kid, I was always very shy if I saw one of my teachers outside of school life. It was hard to picture them outside of their "normal" habitat - lol. You'd think I would know better, as my mother was a teacher too.

YP: The library would be a much more popular place if Olga were sitting behind my desk.

Briony: The sea is much better, it seems to me! A canal is a sorry substitute!

Robin: The furry side of my life -- LOL!

Sharon: Absolutely! She was hunting the whole time.

Angelicastar: That sounds so funny, having three dogs in a stroller! I'd love to get a picture of that!

Red: I guess it is weird, to see people out of context like that. It was kind of strange for me, too!

Ellen: Ha! How did I become a symbol of authority?!

Catalyst: Glad you're liking that book! I thought it was great. Apparently there's a sequel, too, but Vivian says it's not as good.

Bug: I know! What was I thinking?! Maybe I'll go back for one.

Edna: I love teasels, and they're great for birds, which eat the seeds out of those spiny seed heads. Apparently they were once used to comb raw wool.

Jenny-O: Yeah, it's weird seeing people out of context, even as an adult!

The Marvelous Mrs. Maisel has been on my to watch list now for about a year. What do you think of it? It is so noisy here with my grandkids that I cannot concentrate on watching anything. By the time they are in bed and quiet I am ready to just fall into bed and have some quiet time.

So awesome that you can carry Olga on the train. They will not permit animals other than a service animal on our public transportation which I think is a shame. I bet more people would travel more to places if allowed to bring their dogs! Dogs like to go places too. Have a awesome day. That roast chicken has my innards growling lol...

Your post made me go out in the foggy rainy garden today to rake some if the walnut leaves just for the aroma. I never noticed it before but possibly because we wait until they are all brittle before we shift them.
We are not half as energetic.