Our Tardy Cactus Hangs On 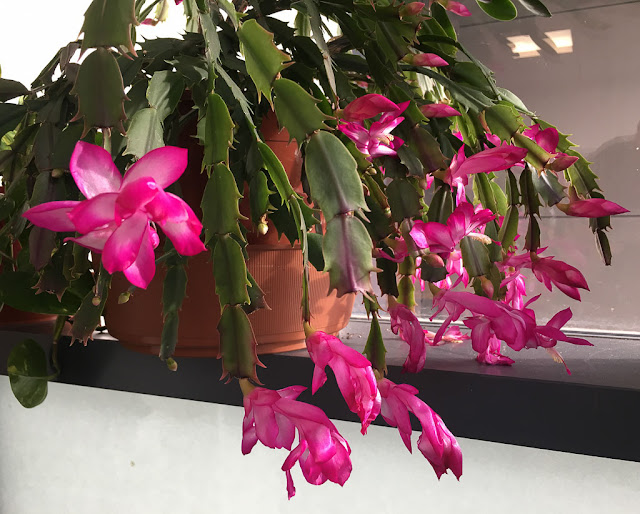 The library's Christmas cactus is blooming away. This plant gets minimal (and dubious) care from the school cleaning staff but it manages to hang on and even prosper year in and year out. You may remember that several pieces of it were broken off not too long ago, and I brought them home and put them in soil to root. 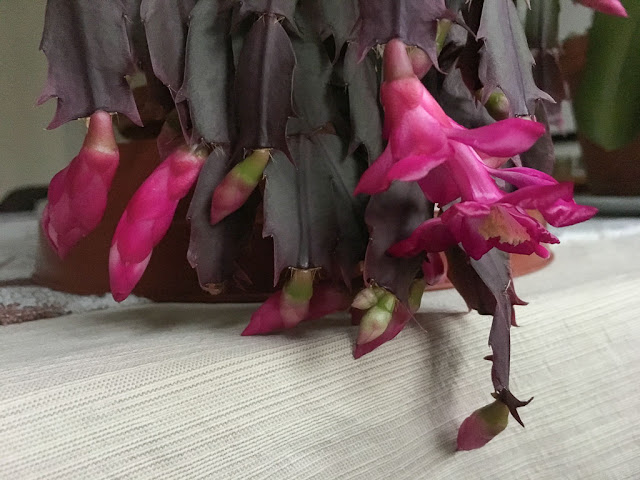 Here's how those pieces look now. They're a bit behind the mother plant but they're all on their way to blooming. The leaves look slightly droopy and shriveled -- and much more purple, which I believe is a sign of a stressed plant -- but I assume that's because the roots still aren't very established. I'm just glad they've survived so far! I move the pot periodically between the bathroom (where it's more humid) and the dining room (where it gets more light).

Speaking of plants, yesterday morning I repotted the foxgloves I grew from seed. I went outside and noticed a squirrel had knocked over one of the plants, and when I checked to make sure it was OK (it was) I realized its roots were growing out the holes in the bottom of the pot. So I transplanted all six of them to bigger pots. Nothing like some last-minute gardening before work!

Oh, and speaking of work -- I can't believe I forgot to tell you this -- remember the kid who had a library book checked out since April? The one whose parents I wanted to meet with, and whose father then told me he wanted the kid to deal with the problem himself? Well, the kid came in on Monday and morning and -- gasp -- paid for his lost book! So that little issue is finally settled.

Now I have to move on to the 7th grade girl who's had nine books checked out since June.

Kids are so funny. Whenever I ask one of them about an overdue book, they all say, "Oh, I know where it is." And I respond, "Well, I'm glad you know where it is, but unless you bring it back that doesn't help!"
Posted by Steve Reed at 7:23 AM