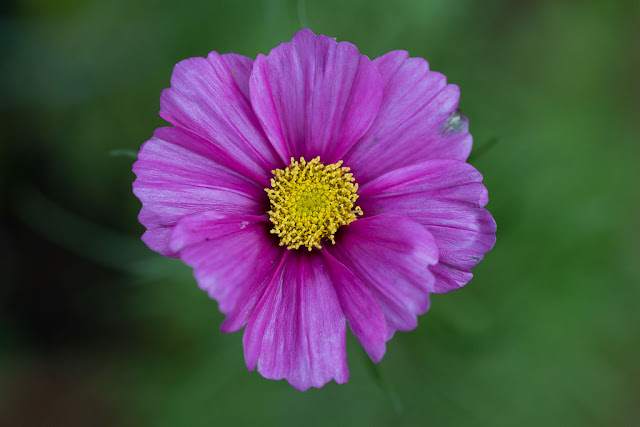 We're in for more gusty, wet, autumnal weather today, with lows in the 30's (F). Some of our garden flowers -- the petunias and most of the cosmos -- have given up the ghost. We have one cosmos (above) that volunteered from seed, and it grew so late in the season that I was afraid it wouldn't have a chance to bloom before winter. But it has finally produced a bright magenta flower, and it has many other buds, so who knows -- we may have cosmos until the first frost. 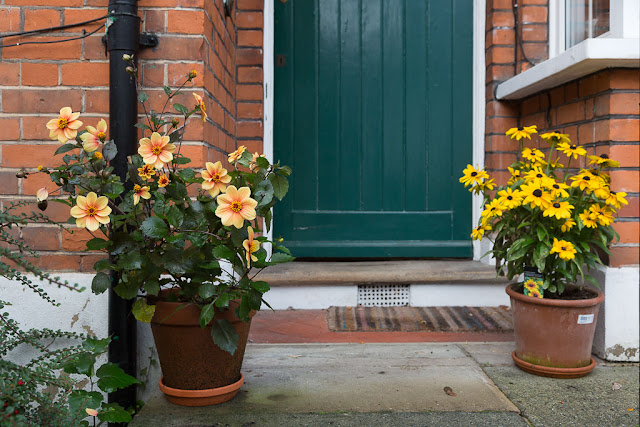 Two of our dahlias have also more or less packed it in, but one still looks so good that I moved it out to the front porch (on the left above). It's sitting out there with the rudbeckia, which is also going gangbusters. Hard to believe I grew those dahlias from seed this year!

Remember how I wanted to meet the parents of the boy with the wildly overdue book? Well, the father did come into the library yesterday for a chat. He didn't pay for the book, as I'd hoped, but he told me essentially that he's waiting for the kid to deal with it himself. I can understand that -- wanting to teach the kid to solve his own problems. So I suppose I'll go back to the kid, now, and tell him I've talked to his father and I've even halved the cost of replacing the book (based on what we can get it for on Amazon now that it's in paperback), and the ball is in his court.

"The Story of Harold" finally arrived in the mail yesterday -- the second copy I ordered, from the London bookseller. So I can stop complaining about that! I'll let you know if it's any good once I get around to reading it.
Posted by Steve Reed at 7:20 AM

To get the overdue book problem solved, may I suggest physical intimidation? A fist in the solar plexus and an armlock should have the desired effect. However, I must say that the father is being a wazzock in my opinion. You have tried repeatedly to get the book back so why should you have to apply any ,more effort?

Undecided here: teaching the son to handle his problems or lazy parenting?
You're still out the book and meanwhile, parent doesn't have to deal with it.

I'm kind of with Marty. The parents can see to it that their child does the right thing with regard to the missing book. Their laissez-faire approach seems to have taught the kid nothing. He appears to have no consequences whatsoever, and you no recourse. Why should he bother if his parents don't seem to care?

I sound a little judgy there, don't I?I realize I dont know the family or their story, so who am I to opine.

Here's what I think about that parent- he SHOULD pay up and then make the child pay him. Come on! I agree totally with what Rosemarie said. Jeez.

bad move dad. he should frog march that kid to the library with his allowance in hand (assuming he gets an allowance) and have him pay for the book. the kid will never do it as long as his parents wait for him to take care of it.

I wish my rudbekias had looked that good. I only got one or two flowers at a time per plant.

Yeah, that dad is refusing to do the work of being a father. No wonder his son is lazy and won't take responsibility. You should NOT have to keep talking to the kid!

Love seeing the flowers there. Reminds me that I've been wanting to move a lovely little dahlia and it hadn't occurred to me to put it in a large pot. I have to say it seems odd for the dad to just put it all on his son to deal with. Not particularly good parenting and explains a bit of why the kid is not dealing with this.

I've had the same experience with a parent wanting the kid to take responsibility for the issue and solve it. You've done the right thing by offering an incentive.

I agree that Dad should have marched the kid right to the library and made him pay for it. That's how you teach responsibility. Sitting back and waiting just does not work. I just love your flowers. I'm impressed that you grew the dahlias from seed. They are beautiful. You have a wonderful day, hugs, Edna B.

I might have called this post "Dahlias and Delays". But then, it's not my blog, is it?

That poor child obviously has horrible parents who can't be bothered with guiding him. I do hope you are able to make a difference in his direction and I admire your persistence in trying to find a graceful way to resolve the problem. There is just no telling what else has gone wrong in that family. No matter where you go these days, you see parents who are letting their children run wild with little supervision or direction.
Your porch flowers are very cheery. What is left of my summer flowers are covered in snow.

I love those pots of flowers! So cheerful in an otherwise gray landscape where children won’t return books. :)

Yeah, I'm with Ellen on this kid and his parents :)

Beautiful blooms! I especially enjoyed that cosmos. I have a soft spot for those.