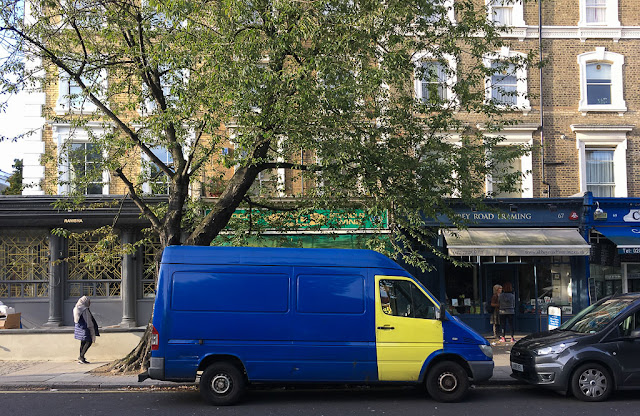 The other day I read an article in The New Yorker about TikTok, and I decided to download the app and see what it's all about. Basically it's a video platform loaded with short, harmless snippets of people dancing, goofing off, performing tricks, stuff like that. It's like YouTube in microbursts. You don't choose what to watch -- instead you just scroll down and the app's algorithm delivers videos it thinks you might like.

It's kind of fun, but I find that my attention span is longer than the videos on offer. Sometimes I want to see more, but all I get is a few seconds. (And sometimes, of course, I don't want to see certain videos at all.) The super-brief format is a little jarring.

Anyway, I'm not sure how much I'll watch it. But having it on my phone makes me feel very hip. These kids today!

Olga has been funny about her walks this week. She didn't want to go out Thursday morning at all -- and it was a perfectly nice day. But yesterday, with a fine gray drizzle coming down and me already running late for work, she decided she not only wanted a walk but wanted a long walk, down the high street through the center of West Hampstead. (The tent is still there, by the way.) I made it to work on time, but only barely -- and I had to bring my cereal on the tube and eat it at my desk because I ran out of time for breakfast at home. (I added the milk once I was at work!)

I finished Demi Moore's book yesterday. That woman was raised by wolves! Her parents were unbelievable -- the alcoholism, the fighting, the rootless wandering from place to place. I've heard of plenty of people with a bad family situation, but I think hers might take the cake. She writes about dating Emilio Estevez in the '80s (a relationship I'd forgotten entirely, if I ever knew about it) and how eye-opening it was for her to spend time with his family because they interacted, talked about things, had relatively stable relationships. I did enjoy her recollections of the movies she made. I guess she saw the book as an opportunity to tell her story in her way, rather than allowing the tabloids to tell it for her -- and I can see how she'd want that.