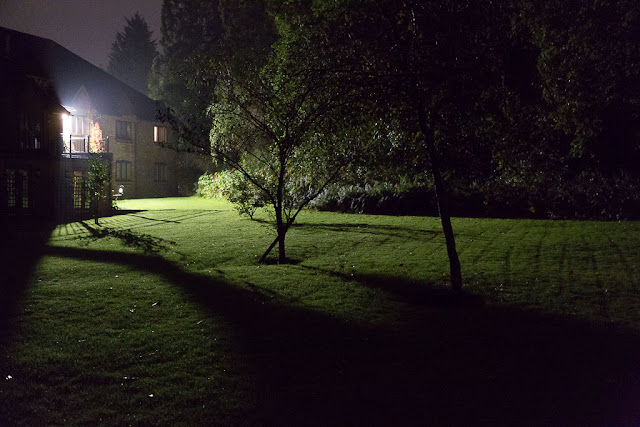 Here's another photo from our Monday night hotel stay. That's the Garden Lodge of the Grim's Dyke Hotel on the left, where our room was located. I took the dog out that night and noticed these terrific shadows stretching across the lawn, which was encircled by dark forest and a ragged, autumnal garden. I was concerned Olga would charge into the woods and disrupt some poor wild creature's nocturnal existence, so I kept her on a leash.

Several of you asked why we had Monday and Tuesday off work. I guess I should have explained that! It was October break, a regular feature of our school calendar. I'm not at all sure why we have a two-day break in October, but we do.

We're back at work now, though, and life goes on as usual.

Speaking of nocturnal animals, you may remember several days ago I tried without success to get a video of our garden foxes. Well, I gave it another whirl, and this time had much better luck.

I set up the camera at the back of the garden, our traditional spot, and put out the same boiled egg as "bait." First a squirrel checked it out, but wasn't interested. Then the fox showed up -- and then another, less welcome visitor. Never a dull moment in our garden!

I thought I set the time and date correctly on the camera, but apparently I told it December instead of October. So just change that 12 to a 10.

Last night I had a rare opportunity to meet another longtime blog pal -- Elizabeth, from Los Angeles, whose blog I've been reading for about eight years now. She's visiting a friend in Belsize Park, which fortunately is just a stone's throw from where I work in St. John's Wood. So I walked over after work and met her and her friend Sarah at a local pub, the Washington. (An appropriate place for a meetup of expat Americans!)

It seemed amazing that I'd never met Elizabeth in person before -- as with every other blogger I've had the opportunity to meet in person, I already felt like I knew her so well. Being immersed in each other's lives in this virtual way really does create real-world connections, doesn't it? We had a good time catching up on books and movies and family news, and in a few days she'll be off to Italy to visit her son Henry. It's mind-blowing to think we two creatures who live on different sides of the planet could come together so easily. The world is much smaller than we think.
Posted by Steve Reed at 7:26 AM