Beans and Other Memories 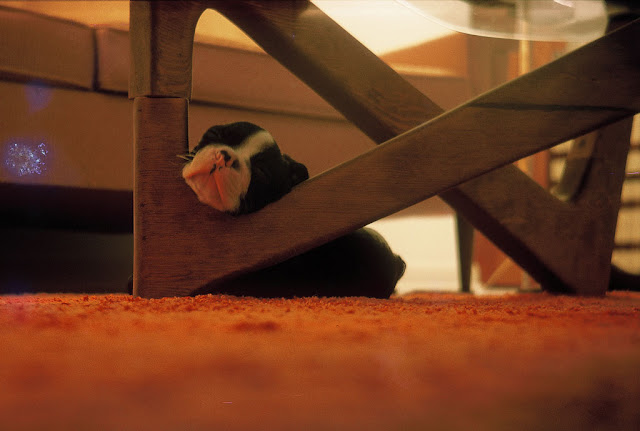 As promised, here are some digital scans from my parents' old slides, which I brought back with me from Florida. I hadn't seen any of these pictures in years, so it was fun to go through them. Some were quite surprising!

We start off with Beans, my parents' Boston terrier, from 1965. Apparently he fell asleep with his head resting in the crook of the coffee table legs. I can just hear my dad laughing about that. 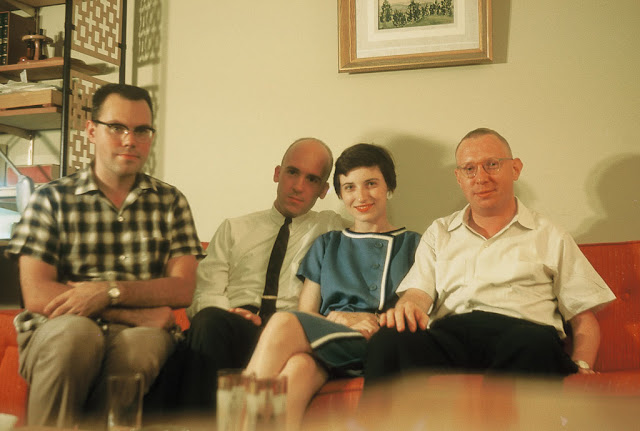 These are my parents (center) with some of their friends at the University of Maryland, shortly before they were married in the summer of 1962. This picture blows my mind. They look so young -- and they were, 24 or 25.

Considering how the marriage worked out, I want to yell back in time, "DON'T DO IT!" But of course, then I wouldn't be here. 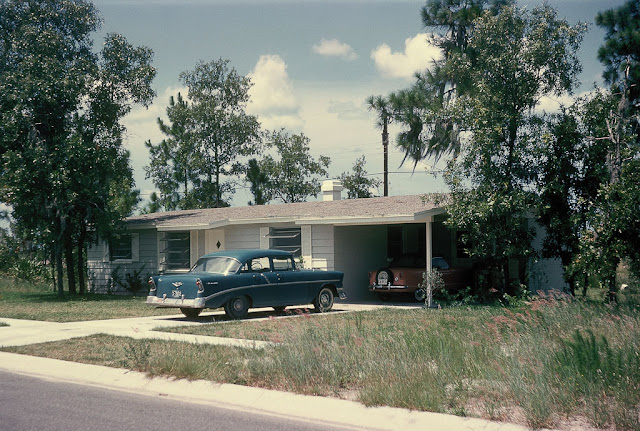 This was where my parents lived in Tampa in 1963 -- a house that was back then in the middle of open fields, but now backs up to University Square Mall and the congestion of Fowler Avenue. Here's what it looks like today.

I never lived in this house. Just before I was born, they moved out to suburban Pasco County, north of the city. 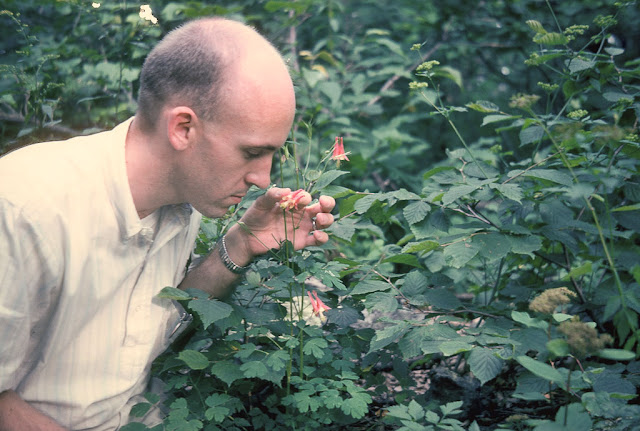 Here's my dad on his honeymoon in 1962. My parents went to Skyland, in the Blue Ridge mountains of Virginia. I think he's sniffing an aquilegia flower, also known as columbine -- Dave and I have a couple of varieties in our garden now. 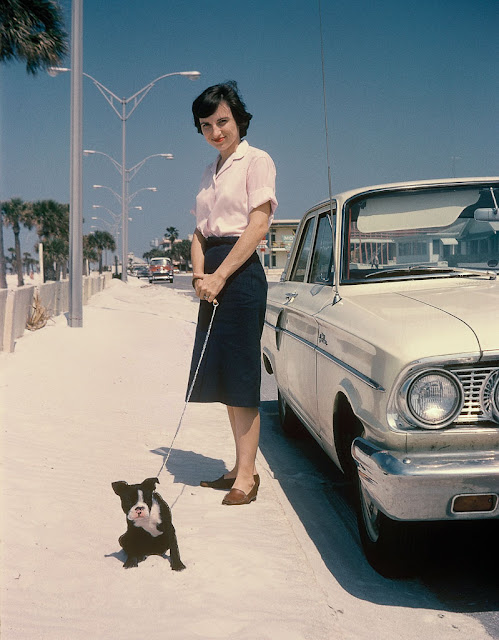 Here's my mom with Beans at Clearwater Beach in 1965. Mom isn't really a beach person, and as you can see, there wasn't a whole lot of sunbathing going on. 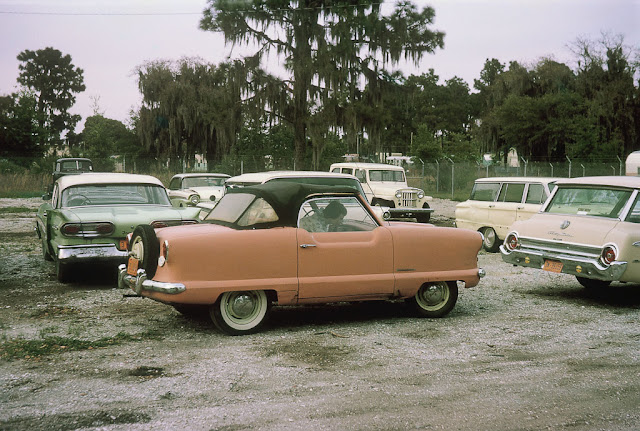 Here's Mom in her little pink Nash Metropolitan convertible, in Spring 1964. I think this was around the time they sold it. (You can also see it sitting in the carport of the house above.) Many years later Mom still talked about this car. She loved it. 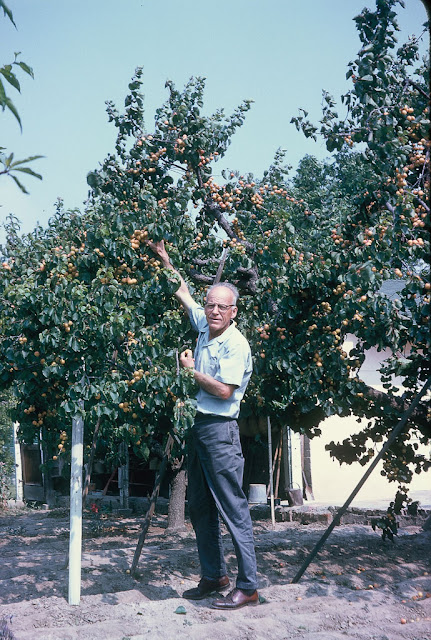 This is my paternal grandfather, picking apricots (I think?) in California in 1963. I never met him -- he died a few years before I was born. He was a postman, and my dad said he always enjoyed that job, getting out and walking around and talking to people. 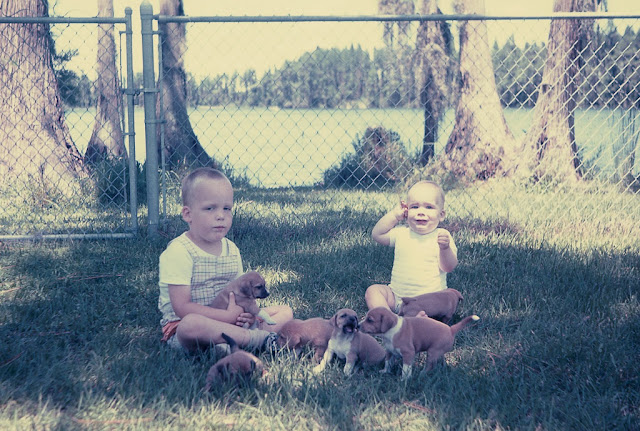 Finally, here's me with my younger brother in our lakeside back yard in 1971. I look skeptical, and my brother looks terrified! The puppies were no doubt the offspring of Boots, our dog at the time. Boots had several litters, from which we got several other dogs, including Honeybun, Gus and Paco. (This was before spay/neuter advocacy, so dogs just reproduced willy-nilly.)

There are many more slides -- more than I could ever blog -- but you get the idea! I'm glad to get some of them scanned for easier viewing in the digital age.
Posted by Steve Reed at 7:17 AM

I loved all of these pictures. Fascinating and now historical evidence of times gone by. My favourite was the image of your mother standing on the promenade at Clearwater Beach in 1965 in bright sunshine. So elegant and bashful but with hidden depths. Thanks for sharing these private photographs Steve.

I loved these pictures too! I have done the same thing with literally thousands of my father's slides. Fortunately, I had a dedicated slide scanner for many years (part of my work) that worked on the long-obsolete SCSI technology (mid to late 1990s). Later I bought a flat-bed scanner with a slide attachment that could scan 4 slides at once every 5 minutes. (Such breathtaking speed! LOL) Much later, I bought a more up-to-date scanner that scanned a slide in about 1/100th of a second. I could scan my slides at the speed at which I could feed the slide into the slot, press the button, take it out and put in the next one. I did thousands that way. And having them in digital format is the way to go. No one even owns a slide projector these days.

Not sure why I should be so fascinated by someone else's photos but I am. More please.
Briony
x

Great photos. Your mother looked stunning! And the men -all ages- look distinctly alike.
Thanks for sharing.

It was delightful, all those moments that I spent in 1965 this morning. Wow, you look a lot like your father. And your mother is beautiful! Her taste is classic -- there is nothing dated about her elegance at all.

I just love looking at mid-century design, especially the cars. My husband and I found a cable show that broadcasts vintage car auctions live from such hot spots as Dayton and Oklahoma City, and we sit there and watch it. I wish I could have driven a Nash convertible once in my life.

Wow. Did these just knock you off your seat? For some reason I can't stand to look at old pictures from my family, my youth. I guess there are a lot of reasons.
But your mother was so pretty and as everyone has said- so elegant.
Beans certainly featured prominently.
Funny how that old house has held up.

These are wonderful. The Tampa house circa 1963 is such a typical Florida house of the time. My husband and I have been to the Skyland Resort in the Shenandoah National Park many times and always enjoyed it. Have you been there?

Wow, you certainly take after your grandfather. I'm sorry you did not get the chance to know him.

These are amazing. What a treasure trove of memories. You look like your dad a bit!

I'm sure that these slides bring back many great memories.

great pictures. you really take after your dad. and their first house...looks so different today!

oh, and I love your mom's car!

It surprises me how long ago and old photos from the 1960s look these days. More than half a century really is a long passage of time in so many ways. I love seeing these photos of your family from back then. The photo click of an instant and all the evocation it inspires.

Wow, these photos are fantastic! Your mom is a classy lady and your parents actually make a very handsome couple. I covet your mom's convertible. I'm so glad you shared these photos.

Beans is such a great name for a Boston terrier. Your parents make a very handsome couple in that second photo. I can certainly see the family resemblance between you and your dad. That little Nash Metropolitan is a very cute car. It made me think of the old blue Nash Rambler that I drove while I was in high school. And, I agree, you do look very skeptical in that last photo. You've made me want to dig around in my old photos and see what I can find.

It is easy to see the family line, from your grandfather to you. I had a bunch of slides scanned once upon a time and sent them to kids. And I STILL have a slide projecter.

I love love the photos! We had a Nash Rambler when I was in high school. My favorite car back then was the '49 Ford convertible. My best friend's boyfriend had one and us girls had it all the time. Lots of wonderful memories here. Your Beans was quite the handsome little man. And I agree, your Mom was lovely. Thank you for sharing. Steve, you have a wonderful day, hugs, Edna B.

Your mom is so elegant & pretty - & SLIM. I've never been (nor ever will be) that elegant & slim. And I LOVE her car! It would be so cool to have a little car like that to zip around in.

What a wonderful thing to discover/rediscover these old pictures! Lucky you.

Beans is a great name for a dog. And what a cute little pink car.

You know, your folks were probably very happy for some period of time. (Although maybe you know otherwise.) So it may not be such a bad thing that they married even given that they eventually parted. My folks divorced when they were in their mid-sixties. I have their wedding and early marriage photos and they looked very happy. Despite how unhappy they were in later years, it had never occurred to me to want to warn them if I could go back in time. I had a good childhood and felt loved by both of them.

You sure look like your dad. And your mom was very striking! I hope you do share more photos if you get them printed.

OHHH I am loving these old photos! Good looking people and pooch! That car is a dream!

Love these photos Steve, your mom looks so pretty you will have to show her these photos next time you go. Cute photo of you and your brother with the puppies, thanks for sharing I loved that time period the cars especially, today it seems that all the cars look the same.

I like the old photos. The big guy scanned all of my mothers before she died. It was lovely to see my parents young, they were middle aged by the time I was born.