Along the Knotweed Trail 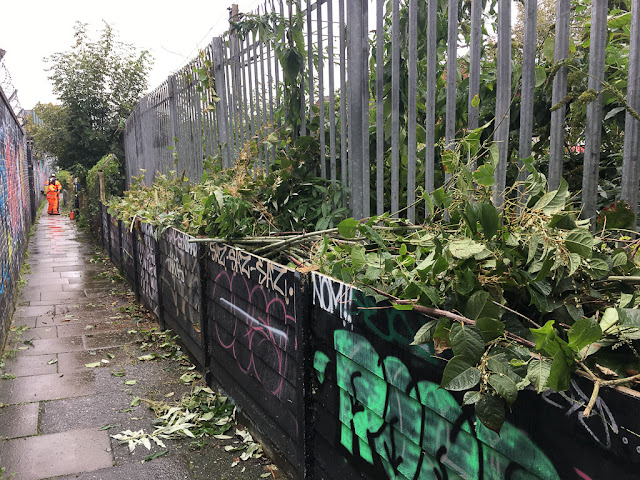 It rained all day yesterday, but that didn't stop Olga from wanting a morning walk. I swear, I don't know who this dog is -- normally Olga would sooner die than take a walk in the rain. She must really be feeling cabin fever!

We walked all the way over to Kilburn, and then Olga insisted on going into the tube station. At first I resisted, but then I figured we could just take the tube one stop back to West Hampstead -- so that's what we did. Olga loves a good tube ride.

Still refusing to go home, she took me down Billy Fury Way (above), where we saw these workers engaged in the Sisyphean task of removing Japanese knotweed along the train tracks. Knotweed is a terribly invasive species here in Britain, so everyone does their best to contain it. It looked to me like they were both chopping the stalks and spraying them with herbicides. I got out of there quickly -- I don't want to be exposed to that stuff.

For Olga, the rest of the day was comprised of this: 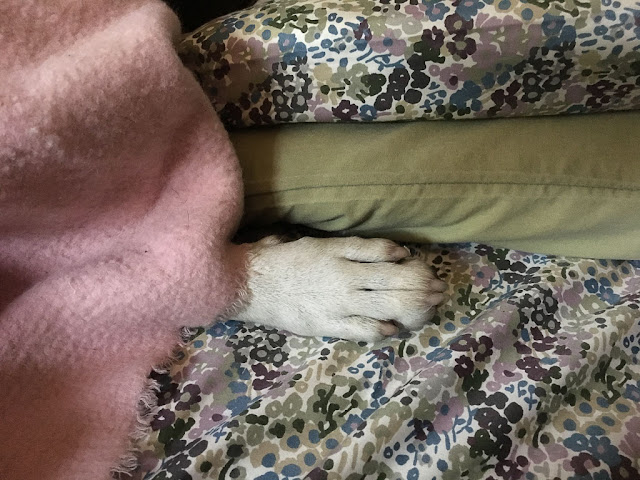 Sleeping, covered in her pink blanket. When I took that photo, her paw was the only visible part of her. Her snoring was audible, though.

I got a lot of reading done. I finished off another New Yorker, including an interesting article about a photographer who has spent the last few decades traveling around the perimeter of the Atlantic Ocean with a large-format camera on a tripod. He sets it up in locations so remote that, in some cases, virtually no one has ever been there -- and they're often locations that are destined to disappear, because of melting sea ice. He takes one picture, and then moves on.

What's interesting is, his pictures -- to me -- sometimes look like blurry accidents. There's white foamy water and mist and rocks, sometimes a black sky with a white splash of moon. I'm not sure I understand why the photos themselves are so significant. Maybe they're not -- maybe the art is in the making, the process of traveling to these remote outposts with clunky equipment at great effort and expense. Maybe the picture itself is secondary. It makes you think about the nature of art -- is it the doing, or the end product?

I also read "Octopussy," the James Bond book I posted several days back. "Octopussy" itself is really just a short story, and Bond is a peripheral character. (It bears absolutely NO resemblance, plot-wise, to the Roger Moore Bond movie of the same name.) Now I can say I've read Ian Fleming. It's smooth and fast-paced, as one would expect from such a popular writer.

Finally, I watched a movie I recorded weeks ago on our DVR -- "Fair Wind to Java," with Fred MacMurray and Vera Hruba Ralston, from 1953. It was one of those mid-century technicolor costume dramas I love, in which the Czechoslovakian Ralston had to pretend to be Indonesian -- mainly by wearing severe Spock-like eyebrows. I was more entertained than I thought I might be at the outset. Dave put on his noise-cancelling headphones and blocked it all out.
Posted by Steve Reed at 6:50 AM