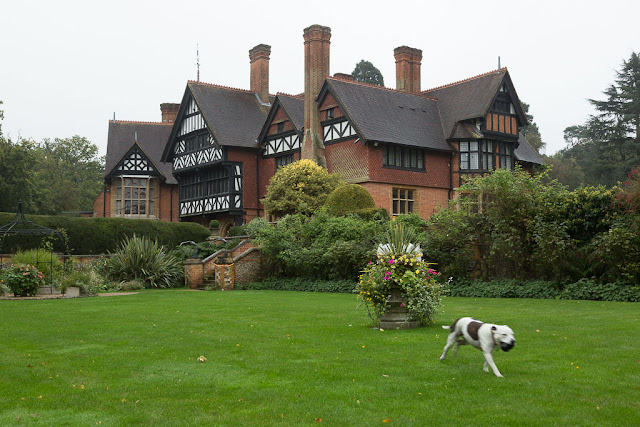 So here's where we are -- the Grim's Dyke Hotel, near Harrow. You probably don't remember, but I passed by here more than a year ago when I walked the London LOOP, the large circular walking path around the city. At the time, I wrote that I'd love to stay with Dave and Olga, and it's been hovering in the back of my mind ever since.

The main building is the former home of William S. Gilbert, half of the operetta-writing team Gilbert & Sullivan. We're not staying in the main building -- we're in the "Garden Lodge," a strip of more modern motel rooms at the side of the property. We've got a ground-floor room looking out onto a field and, beyond that, a fenced garden. As I write, Olga is sitting at the back door, watching for rabbits on the grass. 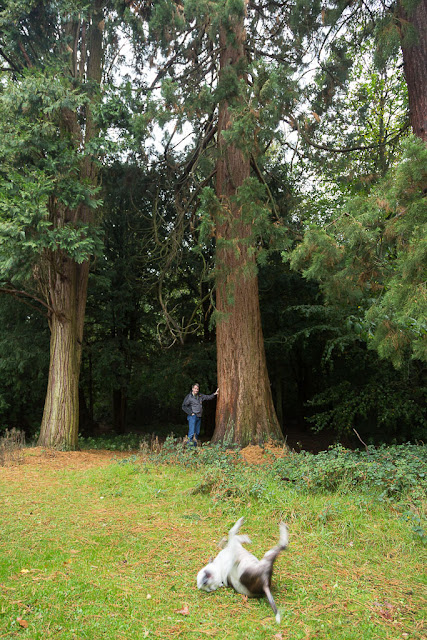 The big attraction here is the woods. There are gigantic trees all over the property, including redwoods like the one Dave is checking out above, and there's a dense forest growing around several ponds and the Grim's Dyke, an iron-age ditch of uncertain purpose that runs nearby. I remember walking through the woods on my LOOP hike and thinking that they were perfect for an outing with the dog -- and they are! As you can see, she's overjoyed.

Yesterday evening, after we arrived via tube to Stanmore and then taxi, we checked in and took Olga out to the lawn for a romp with her Kong. Then we walked through the forest out to an adjacent dirt road, which according to some maps has probably my most favorite street name in all of Britain: Ass House Road. 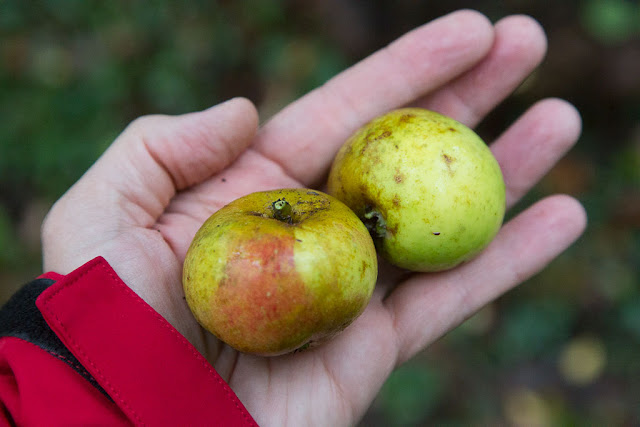 We found the Gilberts' old orchard, with gnarled fruit trees that definitely look as if they've been here at least a hundred years. Many of them had fruit on them. I took the liberty of picking these two small apples -- according to a sign on the tree it's a variety known as Blenheim Orange, with origins in 1740s Oxfordshire. I ate one of them -- tart and a bit chalky, but not bad. I don't think Lady Gilbert will mind me stealing a few of her apples, since most of them seem to wind up on the ground. (Plus -- she's dead.) 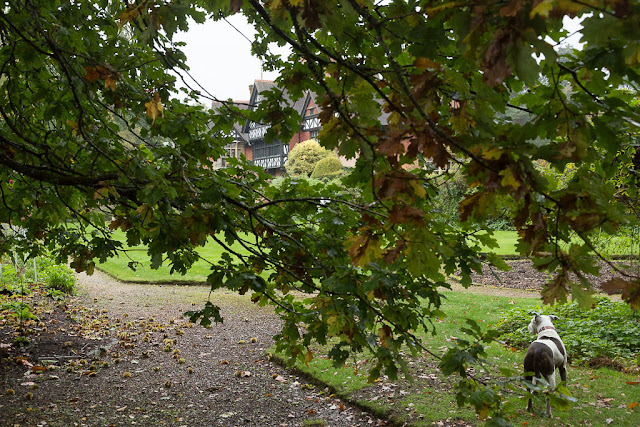 Last night we had drinks and dinner in the hotel's library bar. The bar is visibly stocked with every kind of liquor imaginable, but when I tried to order a martini the bartender informed me that it's "not a cocktail bar."

"Even with all of that?" I asked him, pointing to the rows of gin, rum, vodka, whiskey and liqueurs.

He told me he could make a gin & tonic. So I went with that, and then went with it again. Basically a slow-delivery martini.

There were a handful of other guests wandering around, but as you might expect on a Monday evening in mid-October, the place wasn't hopping. Sitting in the very quiet bar, at times with only the bartender present, I told Dave it felt a little like being the first guests at a party.

(He's exaggerating. This is not The Overlook. There are no creepy twins in the hallway.)

Anyway, today, more exploring the woods and scenery, and then back to London!
Posted by Steve Reed at 7:59 AM