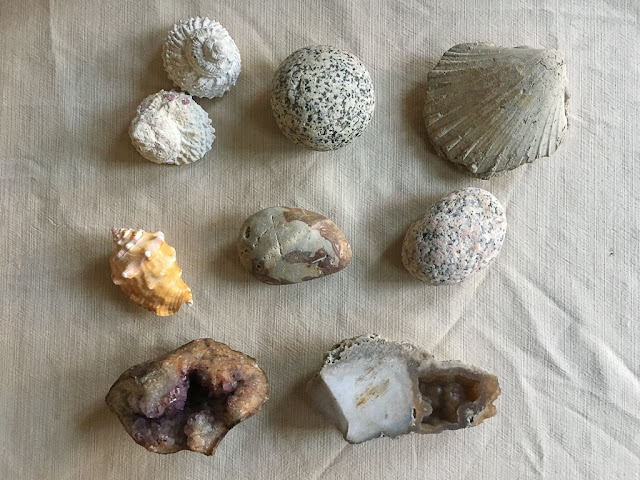 Recently, Mr. Pudding in Yorkshire did a post about souvenir stones he had collected here and there in his travels. He later specifically discussed so-called "hag stones," or those with naturally formed holes in them.

I don't have any of those, but like Mr. P, I am an accumulator of stones. When I was a kid, I used to seriously collect both rocks and shells -- labeling and classifying them, learning how to tell igneous from sedimentary and cockles from clams. Most of those collections are gone now, and what stones I have left are generally travel souvenirs. Here are some I've had for a long time.

TOP ROW, L to R
-- Two turban shells I found in 1985 while snorkeling on Spring Break in Key West with my college pal Robert. I had a huge crush on Robert, but that's another story.
-- A round piece of granite from the riverbed in the village of Tamezmoute, in the Draa Valley of Morocco. My friend Liz lived there in the Peace Corps, and I went to visit her and picked this up along the way.
-- A fossilized giant scallop from Venice, Florida. When I was a reporter at the newspaper there, I covered a story about fossil hunters digging for bones on some land near the airport and a public beach. I don't quite remember what the story was about -- maybe there was some controversy about that digging or maybe they found some cool things -- but there were dozens of these scallops lying around.

MIDDLE ROW, L to R
-- A conch shell from the beach in Winneba, Ghana, where I went after I got out of the Peace Corps in 1994.
-- A stone from the beach in Essaouira, probably my favorite city in all of Morocco, built on a windy promontory on the Atlantic. There's a long beach with some old Portuguese fortifications. I was told these sinking ramparts inspired Jimi Hendrix to write his song "Castles Made of Sand," but now I see that Hendrix visited in 1969 and that song came out a few years earlier. I guess it's a Moroccan urban myth!
-- A piece of pink granite from Montauk, at the far end of Long Island in New York. I used to take the train out to Montauk now and then when I lived in the city.

BOTTOM ROW, L to R
-- A geode, or hollow stone filled with crystals, given to me by my rock collecting mentor, Colonel Mitchell, when I was a kid. Mitchell, who we knew from church, was a serious rock hound, with glass cases all over his house full of colorful, sparkling minerals. In this case the geode is filled with purple amethyst.
-- A fossilized coral geode from Florida. Mrs. Kirkland, the woman who used to care for me and my brother after school every day, while my parents worked, gave me this stone for my birthday in 1974, when I turned 8. I was thrilled with it. I wonder if an eight-year-old today would be very enthusiastic about a coral geode? Maybe some would.
Posted by Steve Reed at 7:14 AM