Bring Me a Shrubbery 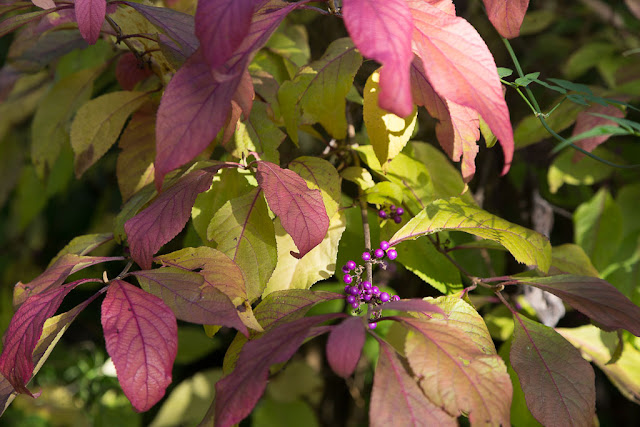 The beautyberry bush in our garden is looking very autumnal. I love that yellow/purple combination.

Dave and I are preparing to have the shrubbery trimmed, both in front of the house and in back. We're responsible for the back garden under the terms of our lease, so we had a tree-trimming firm come and give estimates for pruning the mock oranges, the hazel, the neighbor's invading rose and some other stuff. It all works out to about £700, including the cost of reserving a parking spot for the trimmers and their wood chipper.

We considered having the walnut tree pruned as well, but that seems like a much more permanent change and one that probably requires landlord approval. It also requires local government approval, apparently, because we're in a conservation area. So we scrapped that idea.

The tree company is scheduled to show up on Nov. 7 for that job. I'm actually looking forward to it -- some of the plants out there, particularly around the patio, have grown monstrous. The mock orange has basically consumed the camellia and we need to free it.

The front garden, meanwhile, is the landlord's responsibility. So we've put in a request to have that done too. Here's what it looked like in mid-September, my most recent picture: 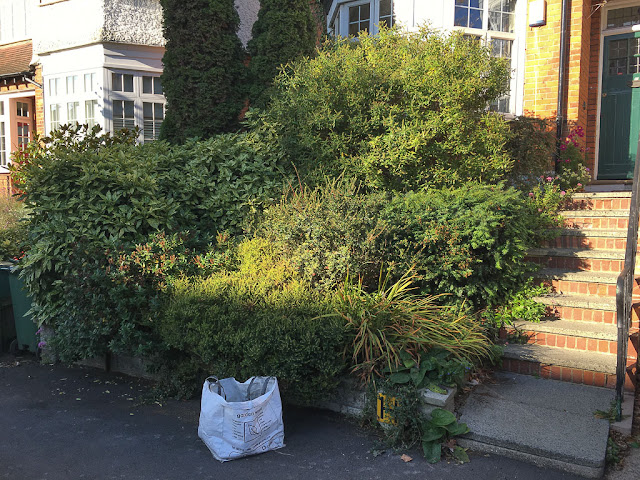 Is that Tarzan's call I hear?

The managing agent sent someone to check it out and they've agreed to a pruning, but they said something about waiting a few months for the right time of year. I don't care when they do it, as long as they get to it before the birds begin nesting. They've also warned us that they'll prune it pretty hard, but I think that's fine. It needs it.
Posted by Steve Reed at 6:19 AM

I had to look up beauty berry bush. The leaves are lovely, and the colour of the berries magnificent!
I bought 2 leucothoe " rainbow" for either side of the front door yesterday. ( and 2 new pots to put them in) Very pleased. Not had any leucothoe before..beautiful variegated leaves.

If I lived there I would have tackled the front myself long before now - regardless of whose "responsibility" it was. It is like your house has got an unkempt beard. As for paying £700 for the work at the back - you must be rolling in money!

Frances: I had to look up a leucothoe, but now that I see the photo I know I've seen them around. I really like them. They'll be a nice addition to your house, I'm sure!

YP: We're hesitant to do the front ourselves because it's also the responsibility of our upstairs neighbors (they and the landlord go halfsies on the maintenance) and everyone needs to be in on the decision-making. Also, if we cut something and it died I wouldn't want to be responsible! As for the back, the shrubs are HUGE -- basically trees and bigger than we can manage, especially considering we own no pruning equipment.

Good luck with all that pruning. That is a unique arrangement for front and back, isn't it? Hope you are having a good day!

Looks like a lot of work ahead. Looking forward to more before and after pics.

were it me I'd get some long handled nippers and tend to the front myself even though it is the landlord's responsibility. keeping it in check throughout the year would prevent it from a hard prune every few years. that's got to be hard on the plants.

I absolutely love your Beauty Bush. A lady I once took care of had a Beauty Bush in her front yard. It looked quite different from yours, but it too was very beautiful. Hers was pink and green. I'll be looking forward to some before and after photos. You have a wonderful day, hugs, Edna B.

That seems like an awful lot of money to get things trimmed but, I really know nothing about what that kind of work costs. Even when I was living in that house, the landlord took care of all of that. And, when I owned a home, the homeowners association took care of it. So you might say, I'm way out of the loop when it comes to pricing yard work.
I love the photo of the beautyberry bush. Great colors.

I hope that front garden doesn't cover your front steps before they get to it!

I spent the best part of the morning watching my man trim the hedge (about 50 m long) down to 3.5 m again and yes, it's very hard work. You will feel so much better when it's done. And it'll look great.

Yes, that front garden will soon take over your house if the pruners don't take care of it.

Pruning is expensive! We have to have the palm trees done once a year to take off last year's fronds. One of them is getting so tall that soon it will be unreachable. Not sure what will happen when that happens.

The berries on the beautyberry bush are a surreal colour - like something a girly-girl would colour with her favourite marker. Quite beautiful. I've never seen anything that shade in nature before.

Landscaping is expensive here, too. There's all the equipment that's required, the danger that can be involved, and the specialized knowledge needed - not to mention the time and muscle power put into it - that all go into that price.

I had no idea that Beauty Berry could be found in London of all places! It's native where I live! For some reason, that just amazes me.
Steve, you'd love the plants here in Roseland. True jungle and gorgeous.