From Florida to California 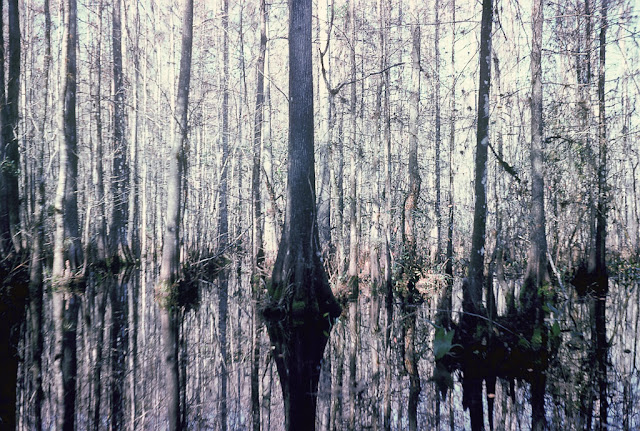 You all seemed to enjoy my parents' old slides when I posted a selection a week ago. So let me do a followup with some more images from the same slide trays, which cover pretty much the whole decade of the '60s.

First, this very Florida image of Highlands Hammock State Park near Sebring. My great-grandparents lived in that area, and my dad and mom visited fairly frequently. Dad took this slide in 1962, but I'm guessing Highlands Hammock hasn't changed much in the years since. I love the vertical lines and muted colors. It almost looks like a black-and-white abstraction. 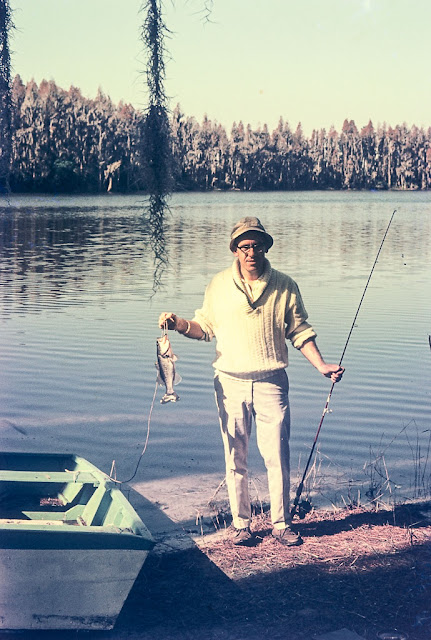 Here's Dad playing the fearless fisherman on the lake where we lived in Pasco County, in December 1966. We used to catch and eat fish out of that lake -- perch, catfish and, as you can see, bass. 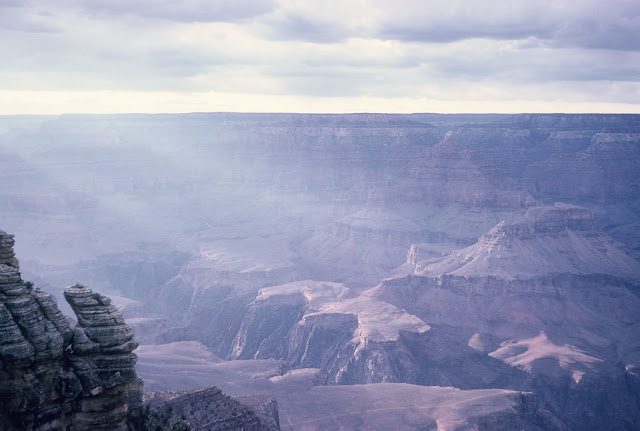 This was from one of my parents' trips out west, in 1963. My dad never seemed to tire of the Grand Canyon, even though he was afraid of heights and could never comfortably bring himself to get close to the edge. 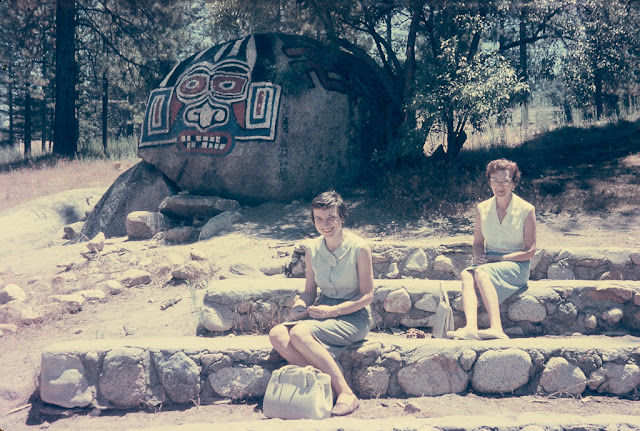 My mom and paternal grandmother at Idyllwild, in the San Jacinto Mountains of southern California, in 1965. This was possibly a Boy Scout camp -- my grandfather was big into scouting -- but I'm just guessing. An amphitheater, maybe? 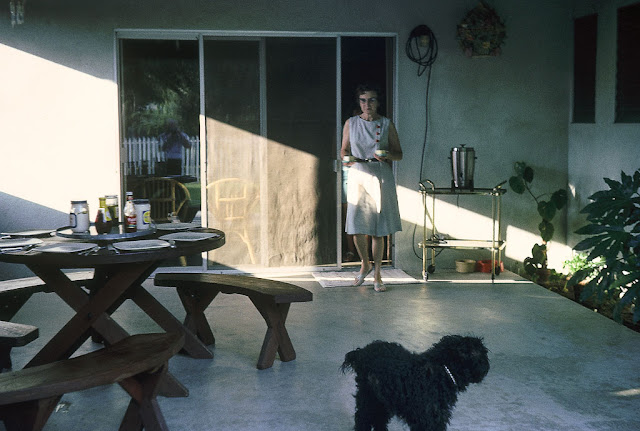 My grandmother on my Aunt Jean's back porch in Riverside, Ca., in 1965. I love the light in this photo. 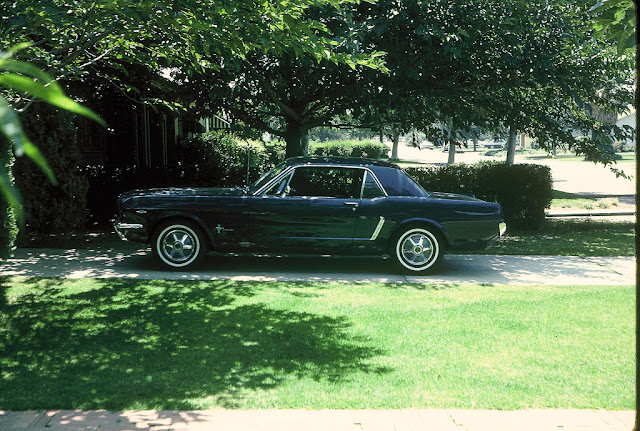 My parents had a navy blue 1965 Mustang. Remember my mom's pink Nash Metropolitan, from the previous photo lineup? Well, I believe they sold that car partly in order to buy this one. This photo must have been taken when it was brand new -- also in Southern California, in my grandmother's driveway. 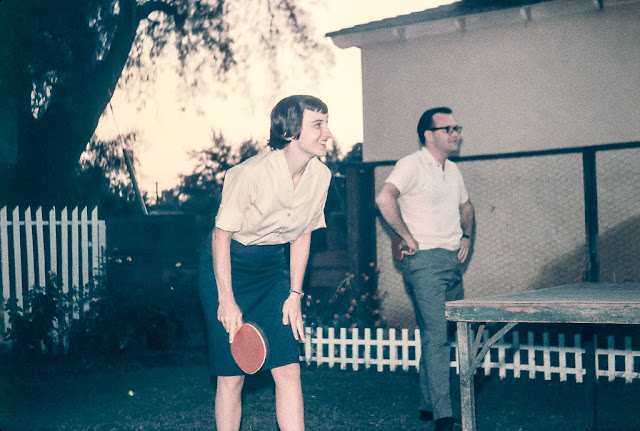 My mom playing ping-pong in my aunt's backyard in 1965. This isn't very characteristic of Mom, who isn't that into games, but she seemed to be enjoying herself! 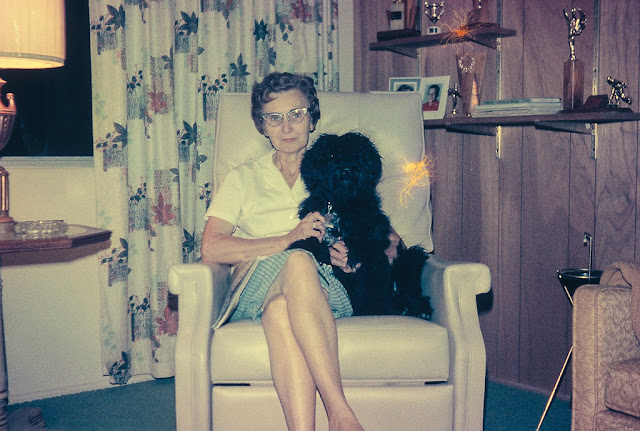 My grandmother with someone's dog. It may be my aunt and uncle's, or maybe it was hers -- though she usually had Boston terriers. I think the dog's name was Smokey, from the notes on the slide box. Don't you love her cat-eye glasses? 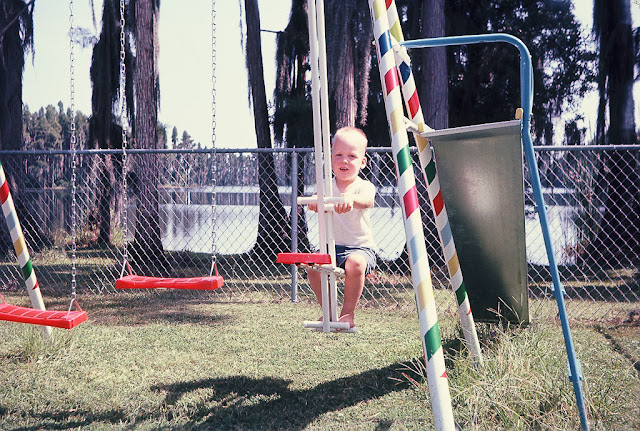 And finally, me on my swingset in early 1970. I think my parents bought this swingset partly to keep me amused while they focused attention on my brother, who was born that June. He and I both played on it in later years, along with various other neighborhood kids. As I've mentioned before, my memory of this swingset isn't entirely pleasant -- I got stung twice by a paper wasp that built a nest in it!
Posted by Steve Reed at 6:55 AM