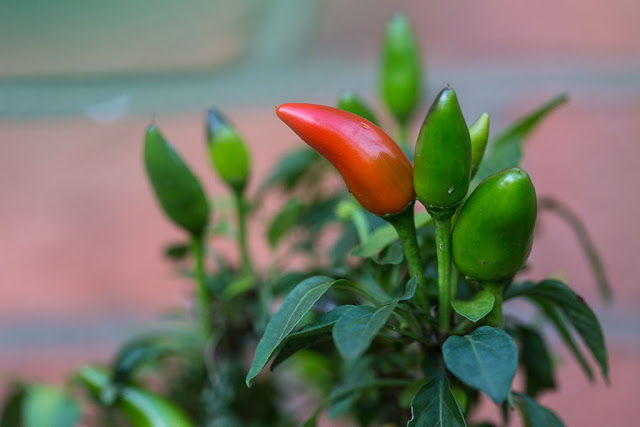 Last fall, I found this pepper plant atop someone's discarded rubbish while walking the dog. I brought it home and put it in a pot, and we nursed it through the winter on the dining room windowsill. In spring we moved it out to the patio, and it has rewarded us with peppers. I'm not sure they're edible peppers -- maybe just ornamental -- and in any case I'm not a huge fan of hot peppers in general. But I love the way they look, and it's fun to taunt the squirrels with something they don't dare touch.

Remember my missing Amazon book, "The Story of Harold"? Well, I contacted the seller. Someone named Mary wrote back a peculiar note which said, "Apparently the process does not continue as normal. I want to help you immediately." She asked me to confirm my address and whether I wanted a refund or another copy of the book. I chose the book, which I may regret. Mary said she would ship one immediately. 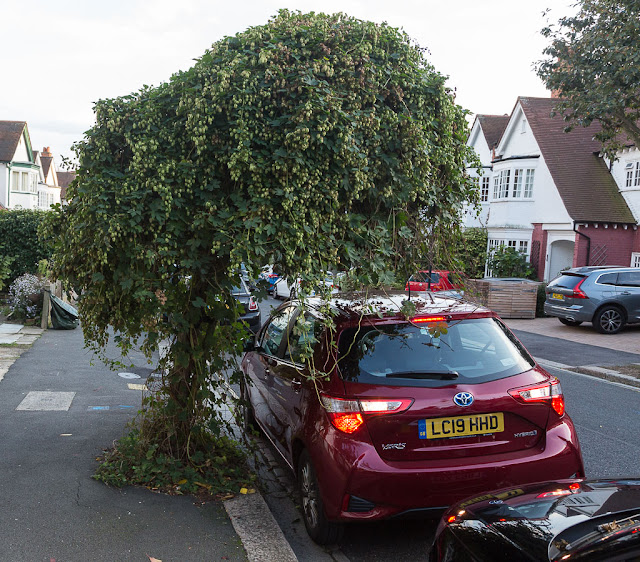 Also, you may remember that I've been on a campaign to save a vine-covered tree on our street. Here's the poor cherry tree, sagging under the weight of a massive, strangling hops vine. (Of course just as I arrived to take pictures, a woman was trying to park beneath the tree -- I explained to her what I was doing so she wouldn't think I was behaving suspiciously! The vines were snagging on the car as she backed into the space -- she got out and checked for damage. So I guess they're more than just an aesthetic problem.)

Anyway, I wrote to the local council, which owns the tree, and I spoke to the woman who lives in the nearest house. She said it's not her vine, she wouldn't mind its removal, and she offered to write the council as well.

I heard back from one of the tree officers a few days ago, and he said he has "prompted the contractors to remove the ivy from the tree" later in the winter when it has died back a bit.

I still have half a mind to just go at it with my gardening shears, but the woman who lives nearby seemed hesitant about that idea. "What if something goes wrong?" she said. I'm not sure what she's envisioning -- the collapse of the tree? But it is true that removing that vine would be difficult with a car parked in that space, and I certainly wouldn't want to damage anyone's car. So it's probably best to wait for the council to handle it.

Didn't someone once say, during the Vietnam War, "We had to destroy the village in order to save it"?
Posted by Steve Reed at 7:01 AM

No one said "We had to destroy the village in order to save it". I understand that this famous quote evolved from an American major's reflections upon the destruction of a suburb of a large town called Bến Tre. However, given what happened in Vietnam the famous quote arguably captures the essence of America's ill-considered military adventures in those terrible times.

Maybe you could just remove a little at a time.
Briony
x

Have you told them it's not ivy?

There may not be much of a living tree under that vine.

I love your pepper plant. It is so colorful. I do hope the whole tree is not taken down. Maybe you could trim it just a bit at a time? You have a wonderful day, hugs, Edna B.

it ought to be able to be pulled off easily enough. I didn't realize hops was a vine.

I hope the vine is easy to remove and the tree thrives in its new freedom.

Wow, that vine has almost consumed that tree. I hope They can remove it and save the tree. Something tells me that English might now be Mary's first language. I love the pepper plant. I see lots of them in these parts and I think they are edible but, unless they are mild, I wouldn't eat them either. With some peppers, you just never know.

Reminds me of the kudzu around here. Consumes all the trees on the sides of the road and looks ghostly. Maybe not as ghostly as Spanish moss, but not far off.

Reminds me of Spanish Moss...I hope the tree can be saved.

You are a good citizen, Steve! Those vines look scary. I'd wait for the Council. I love their helpful yet officious response. And yes, that's a beaut of a red pepper!

I think those peppers are edible but they do look like hot little devils so be careful. I wonder if you could salvage that hops vine to make some homemade beer!

Can you actually see any living leaves of the tree or are they all hops leaves? I hope the tree underneath is okay.

I suspect Mary's first language is something other than English. Hope you get your book this time!

Hops irritate me. My neighbor has them and they like to come over and under the fence and climb everything and anything, the hops I mean, not the neighbors:)

I think I'd just have a go at ripping them down. It's hard to kill hops though.

Maybe try cutting the hop at the base. Then it'll dry up and is much more easily pulled up. Hop stems are so tough.