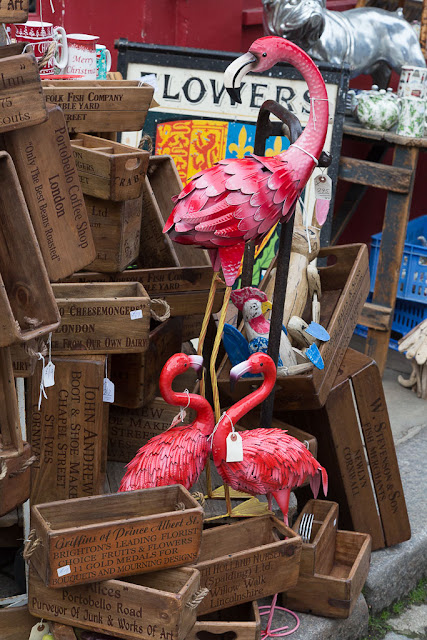 I just woke up from nine and a half hours of deep, uninterrupted, glorious sleep. Hallelujah! I wasn't jet-lagged because my trip was so short, but I was definitely suffering sleep deprivation. I feel a million times better.

My flight back from Washington was super short -- about five and a half hours. Even the pilots commented on how quickly we flew. They didn't say why, but I'm assuming we had some serious tailwinds helping us along. At one point I looked at the ground speed gauge on the movable map (I love those things) and we were approaching the Irish coast at 680 miles per hour! Which seems fast, even for a commercial jet.

Here, I plunged right back into real life. Dave revealed that our TV has been out ever since the tree trimmers visited, which must mean that they loosened a cable connection somewhere in the alley at the side of the house. (Probably when they were dragging branches through there.) I'll go out later and see if I can figure that out.

Also, I had an appointment yesterday with British Gas to come and do our annual gas inspection. Of course they wouldn't tell me when the guy was going to show up -- they said only sometime between 8 a.m. and 1 p.m. So I told my boss I'd be in as soon as I could -- and wouldn't you know, the gas guy didn't appear until 12:30. So my boss was annoyed, and I've had to take another personal day at work to account for missing the entire morning, as well as Thursday morning for the tree trimming.

I get it. I have been out a lot the past few days. But it's just one of those things -- I honestly don't see how I could have managed any of this differently.

While I was cooling my heels at home, I finished off some seafood pasta that Dave made about a week ago. It tasted fine, but I was a little concerned about the fact that it had been hanging around in the fridge for the past week. I'm paranoid about shellfish anyway -- my mom ate a bad shrimp once when I was a kid and I've never forgotten how sick she was. In this case, though, the crab had been canned so I figured it was pretty safe, and we'd already eaten all the shrimp. Ultimately I suffered no ill effects! 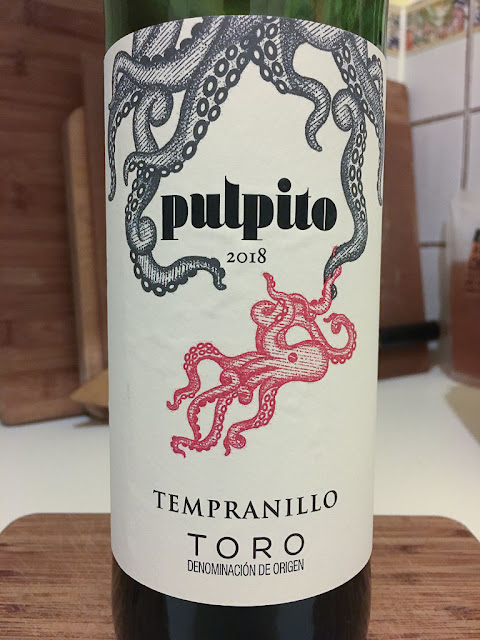 Speaking of seafood, here's my current favorite wine label -- I believe "pulpito" is Spanish for little octopus. I have no idea whether octopi hold tentacles in real life, but I love the art, and the wine's not bad either.

(Top photo: Flamingoes at the Portobello Road market in Notting Hill, about a week ago.)
Posted by Steve Reed at 7:26 AM

I don't think I would have eaten the week old seafood pasta.
The boxes in the photo are wonderful, especially the one which belonged to the purveyor of junk and art. As if they might be interchangeable.
Alphie.

Oh yeah, those tree trimming guys did a great job. Who needs TV anyway? You can always read a good book or take up embroidery. I hope your library boss gave you a good spanking with her swinging handbag..."Bad bad boy Steve!"

I like to think of other species loving one another, the pigeons certainly seem to like to cuddle up.
Briony
x

Glen literally cut our ties to satellite TV when he was trimming azaleas.
Snip!
That wine label is absolutely charming. In my mind that's either a daddy or a mommy octopus holding tentacles with his or her little baby octopus.

Careless workers can cause a lot of problems. That's why I'm a do it your selfer.

hi Steve, I've been reading your blog posts on a daily basis but I never did a comment until I saw that name....you know that name...(lol) It set off a fire storm in me. I will praise those who deserve it and be truthful to those who sit there and hurt others in everything that they do. I am glad you enjoyed the birthday party and it was so nice of you to travel a distance to be there. Sorry it took a day to cool down to come back and be sensible. (laughing hard)

Sometimes things just happen and we do have to take time for ourselves to take care of it. No, bosses don't want to understand. I am retired but was self employed when I was working. It was different, but you still had to be present more than absent. I was in the Insurance Financial business and working on commissions only. My boss was my bills and still is my bills. They didn't seem to retire. (lol) I hope you have a beautiful and healthy day.

it's usually a falling branch that takes our cable out. and that was a fast flight.

Wow, that was a fast flight. I hope you get the cable thing figured out. When things like that happen, I'm at a total loss as to what to do. Love that wine label.

I just love that picture of the flamingoes. They are such a beautiful bird. It's good you had such a good trip home. Sorry to hear about the cable being out. I hope it gets fixed soon. I'm not a wine drinker, but I agree, it's an interesting label. You have a wonderful day, hugs, Edna B.

You mean you didn't bring any of those flamingos home with you? And, though I seem to have an iron stomach, I think I would have avoided that seafood salad, too.

Octopus wine, what will they think of next! lol I do like the label and interpreted it as Ms Moon did.

I was so impressed by your answer to my comment yesterday (taking three trips to get the video) - the things you do for your blog! That's dedication :)

my motto: when in doubt, throw it out! I've had too many run ins with spoiled food I guess.

you receive an annual gas inspection? never heard of that before. Next time just go to work - what is the gas company going to do? How can they expect working people to take time off? ridiculous!

i love the thought of approaching the irish coast at 680 mph! wheeeee!

I have a rule about food if it's been in the fridge for more than two days, I won't go near it. Roger, on the other hand, has an iron stomach and can put up with more aged things.

And you just left those flamingoes sitting there, lost and abandoned? (LOL) Welcome back - the jets go even faster when you convert the mph to kilometres per hour - 1094 km/hr sounds much more impressive! Had to think for a moment when you wrote that your TV cable got torn out. Never having had cable TV (does such a thing even exist where I live?) the only connection our TV has with the world is the aerial on the roof. And I am of the school of thought that says "waste not, want not" - like you I am daring enough to eat something to avoid throwing it out. But a week is pushing it.

Wow that does seem fast... You flew from Washington DC to London faster than I flew from Austin Texas to Reno Nevada!!! Sheeesh Steve are you sure that was a commercial jet? Maybe it was the space shuttle LOL.

So I was reading your blog Tuesday morning and my computer decided to do a Microsoft update and I was right in the middle of your post. Well it is !2::29 am the next day.(Wednesday)and the update is finally finished. I just gave up on the computer and laid down. Like you I had about ten and a half hours of deep sleep. I guess I needed it.

I am so severely allergic to shell fish that I cannot even go to the Ocean. It really bums me out. I took my grandson to Long Beach California to see the Queen Mary several years ago and I was real careful to avoid the seafood.
We had to leave because I was fast turning as red as a lobster and itching all over. My throat was tingling and I took Benadryl but it took a day or so for me to return to normal. I have since had other experiences but I have learned to be overboard cautious.
But that doesn't stop me from admiring a gorgeous wine label and that one is really gorgeous!
Have a great Wednesday and I hope that you can get into your Boss's good graces again really soon... xx

That was an amazing tail wind, for certain. Hurry back and wait.
You dodged a bullet with the shellfish. I have had food poisoning that landed me in a hospital. I don't take any chances now. Better to have a peanut butter and jelly sandwich.
Sleep is grand, work is overrated. There is always someone who worries others are having too much fun.
Speaking of fun, thanks for the link to Vivian Swift. She is hilarious.
I noticed you did not mention chess. I used to play a lot but not so much anymore. Do you play?

That wine label is art. Your boss will get over it. You're conscientious and they appreciate you. I just was describing a librarian in the book I'm writing, a person my subject loved, whom she credits with inspiring her love of books. The whole time you were in my mind.