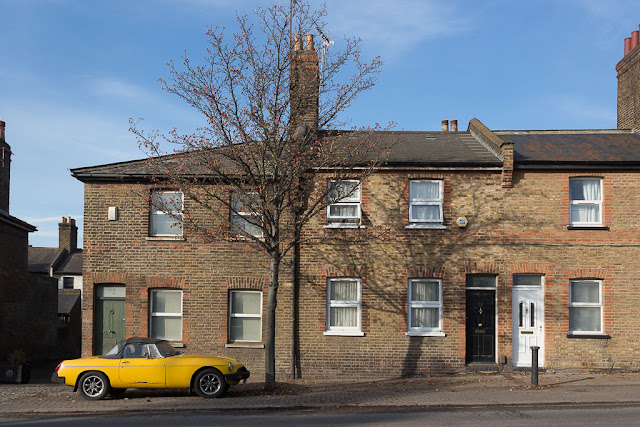 This photo, which I took a couple of weeks ago when Olga and I went to Wormwood Scrubs, is definitely not representative of our recent weather. It rained much of the day yesterday, and when it wasn't raining it was gray and gloomy.

Nonetheless I was a gardening whirlwind. I lifted two more dahlias -- the tubers are now drying in the shed. I lifted the amaryllis bulbs and soaked them for an hour in a one percent bleach solution, which is supposed to help clear the "red blotch" fungus that has afflicted them. (It sounds like an old wives' tale -- is that a sexist expression? -- but I figured I'd try it. I read it online, so it must be true.) They're also drying now and I'll  put them in some paper or cardboard to rest before replanting in fresh soil early next spring.

I raked the leaves again and did some trimming and weeding back in the wildflower garden.

Indoors, I changed all our bedding and took our sheets and blankets to the laundromat to be washed. Unfortunately I forgot to pick them up in the evening, so we had to improvise for blankets last night -- an old bedspread and a duvet we bought when we first moved to London in 2011 and were using our previous landlord's furniture. (Before our own mattress arrived from the states.) It doesn't really fit our bed, but it did the trick in a pinch.

Anyway, there were more chores, but you get the picture.

By mid-afternoon, when we went to Rules to meet Catherine, Dave's former co-worker from the states, and her husband Tom, I was in dire need of a relaxed, celebratory Thanksgiving! We had a terrific meal -- I had dandelion salad, breast of pheasant and bread & butter pudding -- and I was once again struck by how much I love that restaurant. They had a set Thanksgiving menu with turkey, which Dave got, and that seemed surprising given that Thanksgiving isn't a thing in England -- but I guess they get a lot of business from visiting Yanks!

I tried several times to call my Mom in Florida, but her phone rang unanswered. My brother tells me she often doesn't answer it, and since she moved to the memory-care unit she doesn't have an answering machine, so I can't even leave a message. It's getting harder and harder to communicate with her. She no longer uses e-mail or social media and she doesn't pick up or open her snail mail. Maybe I can write her a card via my brother. I'm running out of other options!
Posted by Steve Reed at 7:07 AM