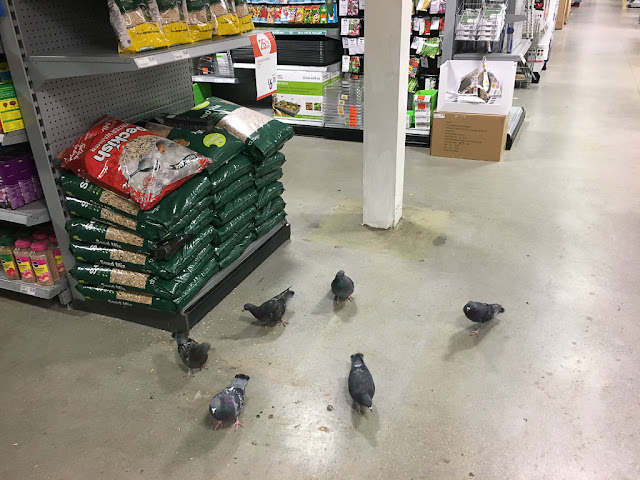 I went to Homebase on Sunday evening, right after Dave's concert, to pick up some fresh potting compost (for overwintering our dahlia tubers) and a suet ball for the local parakeets. I didn't find suet with seeds, but I did find half a coconut containing "mouthwatering mealworms." (At least, according to the label -- I'll take their word for it.) I don't know whether parakeets will eat mealworms, but I guess we're about to find out.

I was amused to find several pigeons inside the store, chowing down on birdseed that had fallen on the floor. Pretty enterprising, those pigeons. I don't know how the store managers will ever convince them to go back outside -- a warm, dry big-box store with a ready supply of food sounds like heaven for an urban pigeon in winter. However they get removed, I hope it's humane.

Dave and I got our vaccinations for Egypt yesterday. In my case, that meant tetanus (actually DTP, combined with diphtheria and polio) and typhoid. Dave got those plus a Hepatitis A shot. (I'm covered for that one already.) We went to a local pharmacy and travel clinic -- no doctor necessary! I updated my trusty WHO card to reflect my boosters so I won't forget I had them.

This morning I have a mildly sore upper arm, but otherwise, no ill effects. 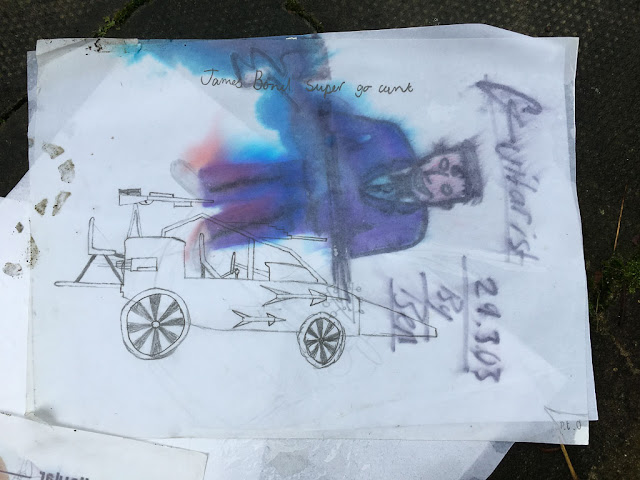 I found these drawings lying in the rainy street around the corner from our house. The one above, of the James Bond Super Go Cart, reminds me a lot of something my brother would have drawn when he was little -- an incredibly detailed vehicle with all sorts of gizmos. It looks like we're also seeing Ben's rendition of a guitarist, dated March 29, 2003. Apparently these drawings have been hanging around for a while. I wonder if Ben himself finally decided to throw them out? 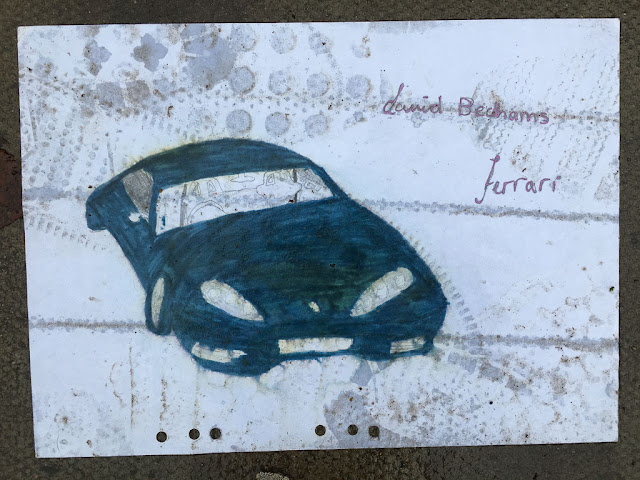 Here's David Beckham's Ferrari, from a rather complicated angle. I admire the ambition involved in drawing it more than the ambition required to purchase it!
Posted by Steve Reed at 6:45 AM

If David Beckham's Ferrari was as wonky as that, he would have crashed within a hundred yards of the car showroom!

It's funny how boys love to draw cars. And guns. Did you see the gun in the James Bond one?
I'm the kind of person who, if I sat down to draw a car would immediately realize I have no idea what a car actually looks like.
Yes. Those pigeons have found a sort of pigeon nirvana, haven't they?
Let us know how parakeets feel about mealworms.

Good On Ya, Up To Date On Your Puppy Shots - Also, My Brother Flys For Egypt The 28th of December - Will Give You More Info After Turkey Day

P.S. Olga Would Appreciate A Just Because Treat

those drawings are a treasure! I have save all of my Son's "young" drawings, before he knew the "suppose to's", children's abilities to draw are magnificent. One little girl friend drew a circle under the chin of a woman drawing, her perfume.
With all of those vaccinations you guys will be well prepared for the future, all of the pathogens released due to climate change. Good job!
Happy Thanksgiving! I hope you eat some spicy Pumpkin pie and a bird of some sort, a Parakeet stuffed with mealworms . a pigeon stuffed with hardware store detritus. The work is already done for you.
I am pretty excited about your trip!!

How sad to find these drawings tossed out on the street. Maybe they fell out of something? I love the photo of the pigeons. They really are quite resourceful. I hope they are not hurt when they are put out of the store. I love birds. I hope the parakeets like the treats you bought. Now that you both have your shots, I'll bet the excitement is beginning to grow. You have a wonderful day, hugs, Edna B.

I'm amazed at the interesting things you find just laying in the street. And, I marvel at the fact that Ben's drawing is now published and he has no idea. The world is such a curious place.

Good that you didn't have much of a reaction with these shots.

That photo of the pigeons is hysterical. Enjoy Egypt.

I'm surprised to see that many pigeons in the store. I've seen birds in other indoor shopping spaces, but never that many. They did find a great place for snacking. You're lucky you didn't get any other post-injection side effects. Yay!!

Those drawings are just a treasure. They remind me of my youngest son who drew cars and trucks from the time he could hold a crayon or a pencil. He now works for an exclusive auto body shop as a paint designer and creates some amazing vehicles. He has won several awards in Texas where folks really know how to show off. Ha!
I had to laugh at the pigeons dining indoors. Who doesn't LOVE free samples?
Glad to hear your shots haven't affected you except for a sore arm. Be sure to drink lots of water. Or wine.
We don't have parakeets outdoors here but I have noticed a black bunny. I gave him a carrot and he seemed quite pleased.

It's nice you didn't have much of a reaction to the shots. This year's flu shot left me with a sore shoulder, arm, back and side for a week!

YP: Well, given that the artist was probably a little kid, I'll give credit where credit is due on perspective!

Ms Moon: Yes, I did see the gun, and the cannon, and the side-mounted missiles. I never drew cars when I was a kid. I always drew flowers.

Padre: Cool! Maybe he'll be on our Nile River cruise?

Linda Sue: LOL -- I should have captured one of those pigeons!

Edna: Yeah, I guess it's possible that someone dropped them. I suspect someone realized they couldn't save them forever and decided to toss them.

Red: Yeah, I was relieved. I remember having a lot of pain associated with an earlier typhoid shot.

Catalyst: It certainly surprised me to see them in there!

Jennifer: I was hoping to find a suet/seed ball, but I didn't see anything like that at the hardware store. I guess I could order one if the mealworms don't go over well.

Robin: I was surprised too!

Penelope: How cool that your son was able to turn his interest in cars into a career!

Jenny-O: Yeah, I was happy about that. As I told Red, past injections have sometimes really bothered me. I think vaccines have improved over the years, though.