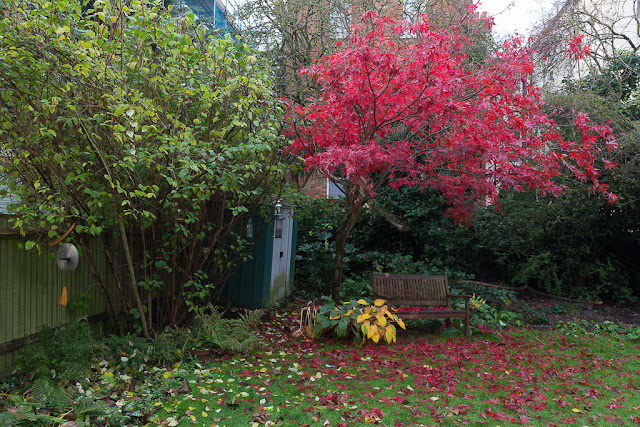 Our Japanese maple is turning more and more red, and carpeting the grass with its discarded leaves. I realize this is similar to a picture I showed you just a few days ago, but I couldn't resist -- I love the color of this tree and how it matches the yellowing hostas. So autumnal! 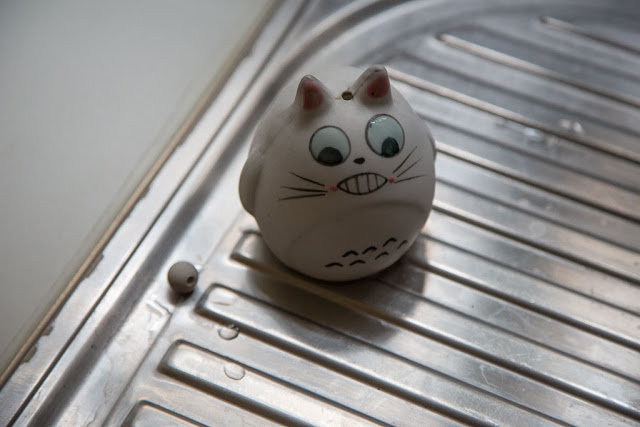 Dave discovered Totoro, who usually hangs from the walnut tree, lying in the grass the other day. I went out yesterday morning and managed to find the little bead that goes with him, then cleaned him up and left him on the kitchen drainboard to dry. My guess is squirrels pulled him down. At least this time he didn't break. 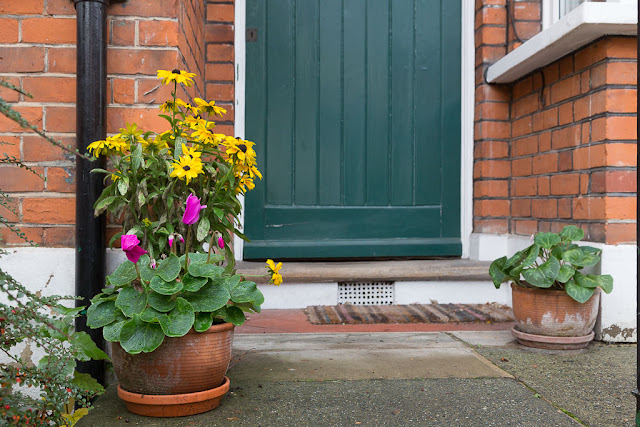 Now here's a rhetorical question. If someone named Dave was making you dinner and pulled a strangely-shaped egg frittata out of the oven, and upon closer examination realized... 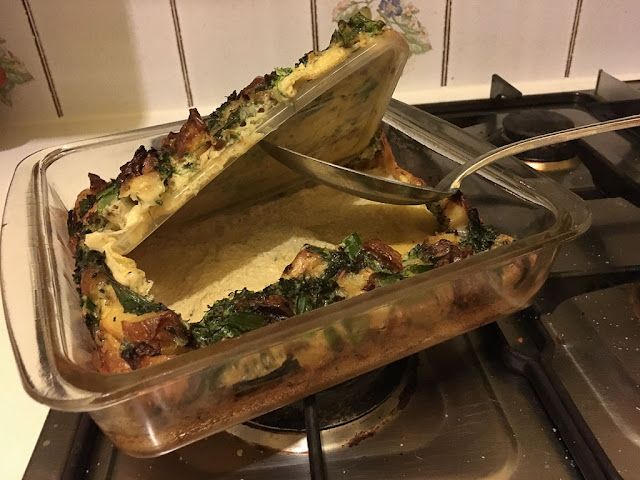 ...that he had baked the plastic lid of a food storage container into the frittata... 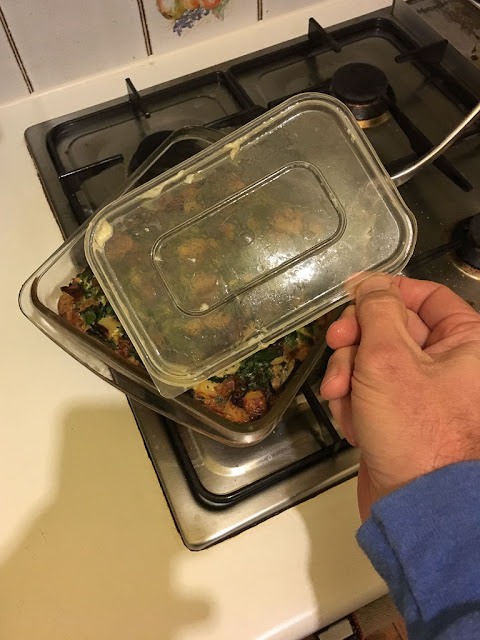 The plastic seemed fine, and the frittata tasted OK, so we did. I have a general rule that when someone cooks for me, I eat whatever they produce. But I was perfectly aware that in this case I was probably also ingesting residual chemicals.

Dave and I laughed so hard when we discovered the lid in the food. He's mystified about how it happened, because he insists he stirred the frittata in the dish before he baked it, and you'd think a big flat slab of plastic floating in the egg would have been fairly obvious.

I am laughing but then to it's frightening because you still can get very sick eating off cooked plastic. If he didn't have to cook it I would feel safe but the heat disturbed the chemicals in the plastic. (lol) Dave must have been tired or hungry. I know when you cook and hungry you will do bad things with your food. I've never cooked tops and plastic in my food. Make sure you keep your emergency number close by in case you need medical personnel. (lol) Take care of yourself and have a healthy day. The best that you can after eating cooked plastic. (laughing hard)

"The Adventures of Totoro" by Reed Stevens could make a great children's fiction series. Totoro would see everything including the baking of "delicious" plastic fillets by The Mad Chef and how Olga The Dog finally caught a squirrel and chomped it down whole before licking her lips and burping contentedly. Reed Stevens could give a public reading in The American School Library but sadly the audience would all be playing board games like "The Adventures of Totoro".

Much laughter.
Week old sea food pasta followed by Storage Lid Frittata.
What next?
I wouldn't be too disturbed by ingested residual chemicals; in the larger scheme of things who knows what other toxic things are out there, waiting to fell us in our daily lives.
However I wouldn't recommend a steady diet of Storage Lid Frittata.
I'm surprised it didn't taste a bit strange.
Alphie

I can't believe you ate it! That's true love! Haha.

Seriously? How in the world did that happen? I am certain that Dave is completely mystified, as I would have been.
Your Japanese maple is far more scarlet than mine. I'm jealous.

Very Entertaining - Olga Says," I 'll Eat For Ya."

I think I'd be calling out for pizza. amazing that the lid seemed undamaged. I ordered some soup to go from a little hole in the wall lunch spot once and the guy put it in a styrofoam container and then for some reason put it in the microwave. I was fairly alarmed as you could smell the plastic melting and the container was definitely affected. I was not about to eat that and threw it out as soon as I left.

your japanese maple is gorgeous. I expect my two gingkos to turn bright yellow any day now from our little dip below freezing.

That plastic lid in the frittata is quite a mystery. I'm surprised it didn't melt. So, of course I'm googling around to find out if plastic melts. It depends on what kind of plastic it is. Some melt at 165 degrees while others have to get as hot as 600F. Well, better in your frittata than in the ocean. LOL!

Good story on Dave. When these things happen we can never understand what went on.

I can see how that tree has gotten even brighter red. Your garden looks so beautiful and appealing and like a wonderful place to relax. It looks like a good place to sit and read and enjoy the sounds of nature.
As for the frittata, since it was a hard plastic, I'm sure the chemical elements were minimal. I bet that is driving Dave crazy trying to figure out how he managed get that lid in there. On another note, that frittata looks delicious in spite of the lid.
As I'm writing this, I'm watching the hearings and listening to Ambassador Yovanovitch testify. As she's testifying, Trump is tweeting horrible things about her. How can anyone support that man?

Beautiful tree, and all you have to do it look out your door to enjoy it, which in a city makes it even more special. And that frittata looks amazing, the lid notwithstanding.

Dave, on more than one occasion I have baked a frozen pizza on the cardboard circle on which it was packaged. It didn't seem to change the flavor but I don't recommend it.

Your Japanese Red Maple is gorgeous! Mine gives us a beautiful showing of bright red every Fall. I like the plants by your front door too. It's very welcoming. As for the dinner, I had me a good laugh. A friend of ours, many years ago, asked his ex wife for directions on how to cook his chicken for dinner. Then he proceeded to fill a pot with water and bring it to a boil before putting the whole package with the chicken in the pot to cook. Yup, it was not edible. You have a wonderful day, hugs, Edna B.

I don't want to laugh as I have had non explained food happenings in my own kitchen but I am puzzled by what happened. Still I am like you, when fortunate enough to have someone cook for me I don't want to complain overly much lol.

Beautiful maple tree. Miss Edna has one that I am envious of every year and so your is now in that selection of envy!

Lovely patio flowers. It is so pretty to watch and see what grows. Have an awesome day!

Now we've forgotten to take the pizza off the cardboard & put it in the oven before (thereby nearly catching the thing on fire), but I don't think we've ever baked plastic. Ha!

As we often cook things in plastic dishes I don't think any harm will come to you both, lol
Briony
x

Oh my goodness. Too funny. You're a better person than I am though. I wouldn't have eaten it, I won't even heat food in plastics.

The maple is gorgeous. I wish I could grow one here.

The mystery of the frittata is extremely mysterious. About a year or so ago we put a small pork roast on the grill. Upon removing it we found a plastic thing they put in the trays to soak up fluid stuck to the bottom. We took it in and sawed off the bottom inch, it was fine. Ever since then I check the bottoms of everything carefully before putting them on the grill.

We would have eaten it, too, to be honest :) I figure we've ingested so many plastic molecules from our lives in the 70s, 80s and 90s (before plastic came under the microscope, so to speak) that what damage is done, is done. A little more isn't going to hurt. Now if I was feeding my little grandsons, I wouldn't serve it to them. They are being raised without so much exposure to processed foods, etc. as their parents' generation had, and I'd want them to have the cleanest food possible.

It is a miracle that the lid is intact...I'm glad it tasted okay.