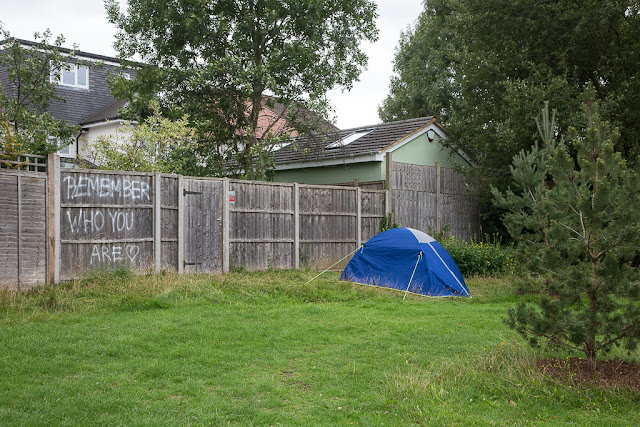 First day back with students yesterday -- and not all of them, just a subset. It went OK and it was good to see some of the kids again, but we're clearly still developing our ideas about how everyone should move through the building safely. When I went to the cafeteria at lunch the food service area was a mob scene.

I had a busy day, including a trip to the post office. I mailed that book back to the Barnet libraries -- the one I tried to take up to Childs Hill a few days ago. I found that I couldn't return it locally, so I just sent it to them. Job done.
And then, speaking of mail, when Dave and I got home, we found an unexpected package on our doorstep.
Remember how Dave's parents in Michigan sent him a present for his birthday, June 22? Yeah, we didn't either. They mailed it on May 27 and it never arrived, and because they'd misplaced the tracking number we couldn't even check its progress. We'd pretty much given up on it. Well, lo and behold, there it was -- looking quite battered and tired but apparently intact. 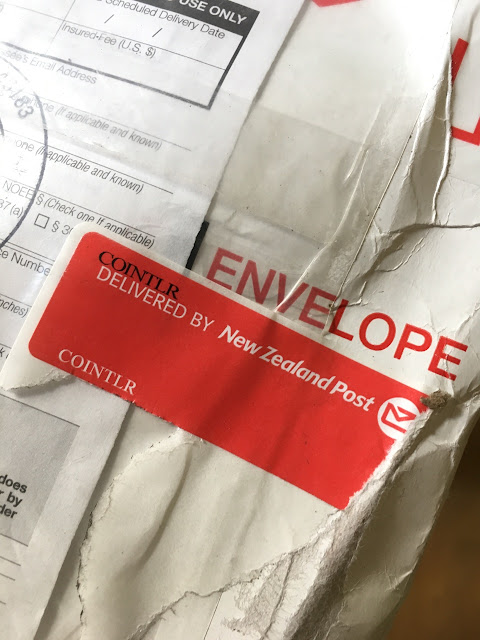 Here's a little sticker on the mailer that gave us pause. New Zealand?!
We tracked the package, now that we had the number, and sure enough, it was in an international mail hub in New Zealand on August 18. That's the earliest tracking we could get -- either its earlier movements went untracked or the tracking had already been deleted from the post office's computer systems. So who knows where it was before that.
The important thing, I suppose is that Dave now has his Wrangler denim shorts and Amazon gift card. 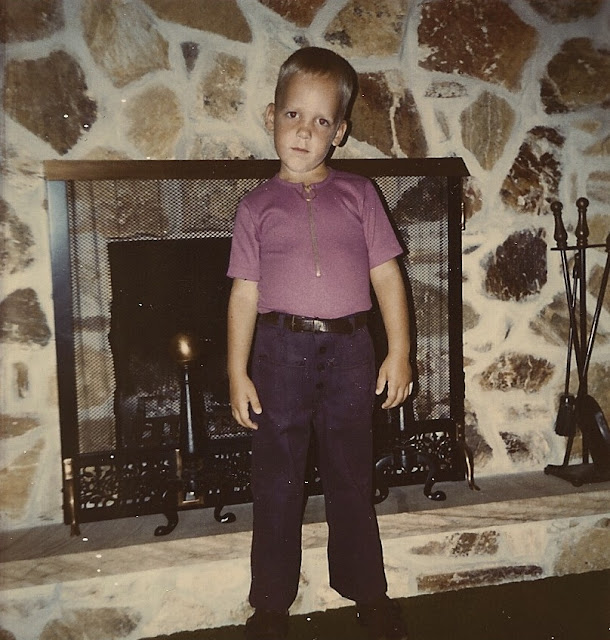 Speaking of the first day of school -- here's mine! The year was 1972, and I was so proud of that purple outfit. I thought the shirt's ring-pull zipper was the coolest thing ever. All I remember about that day (I think it was the same day) is that I didn't fully understand the school bus, and as I was riding home, I cried when it passed my house without letting me off. (It was headed to the bus stop down the street.) The driver had to reassure me we were going to stop!

I am confident that there are seamstresses or tailors in London who would be able to replicate your 1972 look in your 2020 size. You would look so cool hanging about the school library in purple. A short blonde wig would be the icing on the cake.

What a nice photo of a very young Steve. I expect the mail we post to the next suburb goes via New Zealand.

Good message on the fence.
Glad the well travelled parcel arrived eventually.
It makes sense starting just a section of the pupils initially. As you discovered there are problems to solve on the way

Gotta love the around the world trip for Dave's b-day present.

First day of school photos today have a new look in the virtual school world here. Go out by the front door for photo (...no new clothes, no backpack, no lunch box)...then go back inside and log-on. Or maybe just a photo of them sitting in front of their computer first thing in the morning. :(

May Dave count his blessings. What if the parcel had contained perishable goods?

Oh, Steve! What a somber little boy in his new school clothes you were! I just want to hug the little you.
That is quite the journey that Dave's birthday present took. I've always wanted to go to New Zealand. Perhaps I should pack myself in a box and send it to you. Ah well, probably not.

That's an adorable photo of your first day of school. Dave's package certainly had an interesting trip! International mail just isn't the same nowadays. You have a super day, hugs, Edna B.

I see I missed that post with the yellow wall. my yoga class meets in the indoor/outdoor gym at the elementary school (K - 2 I think but just a couple of grades, separate school for the next two, etc) in the next town over and parents have a choice...on-line or in person. so besides figuring out how to social distance and stuff, they also have to figure out the on-line thing. glad I'm not a teacher.

Well you were a very stylish cutie! I don't have any first day of school pictures (and I mean ANY) - I guess my folks didn't think about things like that.

I'm glad Dave's package finally made it, but that must have been a very slow boat to New Zealand!

Adorable photo and great style. I started school a few years earlier than that (cough, sputter, choke). No way I could have worn purple! So glad the birthday gift arrive... via New Zealand — unbelievable.

Cool photo and story of a first day to school.

Wow, that package has been around the world. I'm glad it finally made it to your house.

The package arrived, but first it took a little vacation in New Zealand. What a wild journey that was. That photo of you on your first day of school is so cute. Lovely story.

Steve I had to give you a compliment on the first day of school photo. You had a head full of hair and a little tummy. All that is gone now. (lol) You are still handsome then and now. You look like you could have been a bad little boy. I see you finally got the package. Oh what a trip it made. The last time I saw Olga she was wearing mud makeup. We need to see her daily. Have a great day.

Those are some crisp looking new pants. I hope they bent at the knee.
Aww. I feel badly for that little boy's moment of confusion on the bus. At least you had a kind bus driver.

I no longer feel bad about an item taking 6 weeks (by AIRMAIL) to get from Scotland to Arizona!

Early school memories can be so indelible. How weird that the package for Dave ended up in New Zealand! I will be very curious to hear how school goes for you in the weeks to come. I hope it all goes well, there and here.

The photo of the fence reminds me of one I have of a weathered old barn in Allendale, Michigan that has "BE HERE NOW" painted in yellow block letters on it. Circa 1971 when the book of the same name came out by Ram Dass. Makes me want to paint a fence . . . during the Time of Covid a lot people/kids have left painted rocks on the hiking trails with pithy little uplifting quotes.

Did your mother let you pick out your own clothes? Oh, lucky you. My mother bought our (my twin sister and I) clothes until we were in fifth grade, when I finally got a spine and insisted that I go to Lit Brothers with her to buy stuff that didn't make me look like a refugee from my mother's idea of what was attractive c. 1940.

She also picked out our shoes. I still resent the red oxfords I had to wear in 1964. No go-go boots for me.