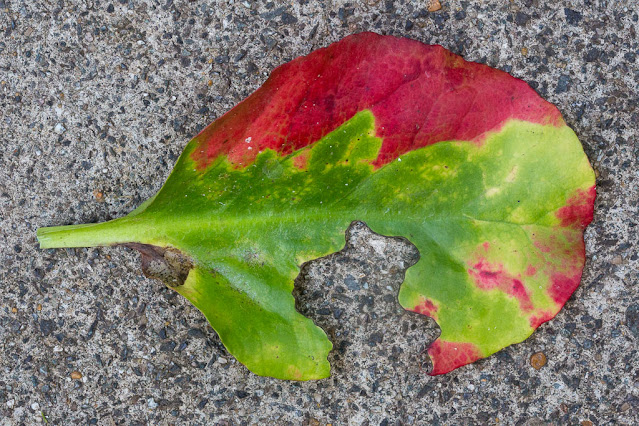 I found this leaf in our garden. It came from a bergenia plant, and I'm not sure if it's an autumn leaf or just an old one. Look at that color!

Yesterday was noteworthy mainly because I mailed our ballots. Dave and I have officially participated in the Democratic process -- he in Michigan, I in Florida. I got tracking when I mailed them, so we can make sure they don't go awry on the way, although if they did I'm not sure what we could do about it. Hopefully they won't wind up in New Zealand like his birthday package from his parents! I've actually heard that ballots shouldn't be mailed with tracking because it can slow them down, but in this case we have more than a month so they have plenty of time. (Famous last words.) I figured if the post office has to account for them, that might increase their likelihood of getting there.
Speaking of New Zealand, blogger Robin posted about a fun web site called Antipodes Map. This web site (which doesn't seem to like Safari browsers, just FYI) will tell you what is directly antipodal to any location on the globe you choose -- in other words, what's on the exact opposite side of the planet.
In my case, if I burrowed through the core of the Earth starting in my back garden here in London -- and the landlords wouldn't like that -- I would pop out in the southern Pacific ocean southeast of New Zealand. The closest land would be a couple of small islands, one of which is called, appropriately, Antipodes Island. Here's what it looks like: 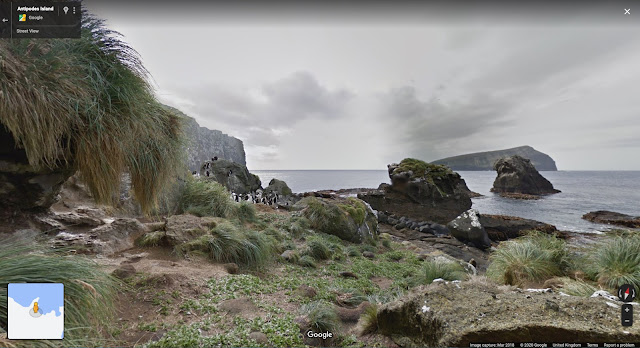 That's according to Google Maps, which allows a little virtual hike up a hilltop on Antipodes Island. Can you see the penguins by that big rock just left of center in the photo? Definitely otherworldly by my West Hampstead standards.

The interesting thing about Antipodes Map is that entering almost any location seems to produce an antipodal point that's underwater. Which I guess drives home the fact that so much of our planet's surface is ocean. I didn't hit land until I started with Tahiti, which produced an antipodal location in northern Sudan.
Anyway, it's a fun way to waste time on the Internet.
Posted by Steve Reed at 6:30 AM

I like the look of that island. Obviously I came out from my burrowing in the back garden fairly close to you..SE of NZ . I will meet you on the island....possibly not for a drink...... doesn't look like many pubs there!

Pity it doesn't work in reverse direction. While I would like to be through to Prague, I guess it has to be of a similar latitude. Ah, maybe Portugal. Not so bad.

Rats! I did not come out in China! I was lied to my entire childhood!
I suppose soon the horrible, awful Bradford Pears will be dropping their leaves which look like the Virgin of Guadalupe when they fall. I'll be on the lookout.
I sure hope your ballots make it! Florida needs every vote for Biden it can get!

I'm right dab in the middle of the Indian Ocean between southern Africa and Australia.

Antipodes Map really does drive home the fact that our planet is mostly covered by water. The only time I ended up on land is when I searched for what was antipodal to Easter Island. I ended up in India. That was a big surprise.
Keep us posted on those ballots. It'll be interesting to see how long they take to get to their destinations.

What fun. I'm going to check out the website now (have to exit Safari first). I love that antipode of you is Antipodes Island.

Ms. Moon - I looked for the antipode to San Francisco & it IS in China!

I made it to land (just barely). Port Jackson, New Zealand.

that was fun. I ended up swimming around in the Indian Ocean about equidistant from Africa, India, and Australia though Australia was a little farther.

I, too, tried the antipodal map after reading Robin's post and I, too, found no matter which of my previous home locations I tried I ended up underwater. Maybe that explains my love for oceanfront beaches.

I've never heard of antipode locations. Sounds rather interesting. I'll be curious about when or whether your ballots arrive at their proper destination. All things considered, they should be okay. You have a super day, hugs, Edna B.

Well that was fun! Except that I'm underwater no mater where I've lived. I find myself southeast of the island of Mauritius if I use my current address and west of Perth Australia if I use where I grew up in Illinois. And, when I say west, I mean way west in the middle of the Indian Ocean.

I looked up my city and I ended up in the water with the closest land, an uninhabited island called Heard Island. The island has 41 glaciers and is 80% covered by ice, so not much different than home:)

The tracking and not tracking is a bitter sweet situation.

Andrew: When I enter Melbourne, I get an antipodal point that's west of the Azores. Not quite Portugal, but sort of. :)

Ms Moon: I do love those Bradford pear leaves in the fall. Why are they awful? Are they invasive?

Bug: It seems like most places in the continental USA produce an antipodal point in the Indian Ocean. As Ms. Moon said, not China! (I get an antipode to San Francisco that's off the coast of South Africa...?)

Robin: I did Easter Island too!

Mitchell: I'm sure it was named Antipodes Island because it's antipodal to London.

Ellen: Yeah, the whole USA pretty much lands in the Indian Ocean, it seems.

Catalyst: To wind up on land I find you have to start with an island -- something in Polynesia, for example.

Edna: I'm sure they'll be fine. We mailed them early enough that I doubt there will be a problem.

Sharon: On the other hand, if you start with a point in the southern Indian Ocean (like Heard Island, as Lilycedar mentioned) you will hit land in North America -- in that case, a point near Shellbrook, Saskatchewan.