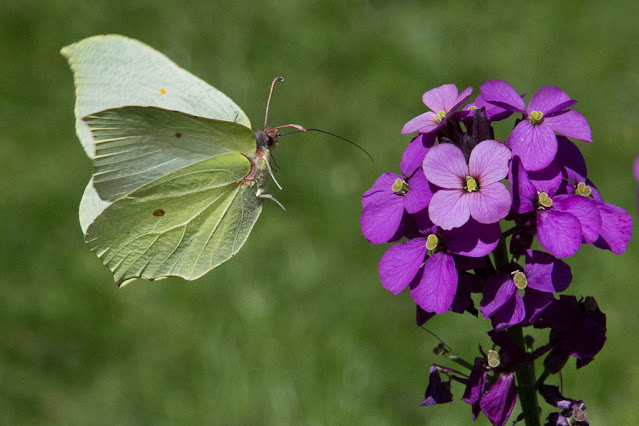 This butterfly turned up in our garden yesterday, flittering around our purple wallflower. At first I thought it was a plain ol' cabbage white, but the leaf-shaped wings and light green color with single spots seemed unusual. Turns out it's a Brimstone, which I don't remember ever seeing before, though it's possible we've had them around. (I tend to write off any white or whitish butterfly as a cabbage white, and I really shouldn't!) 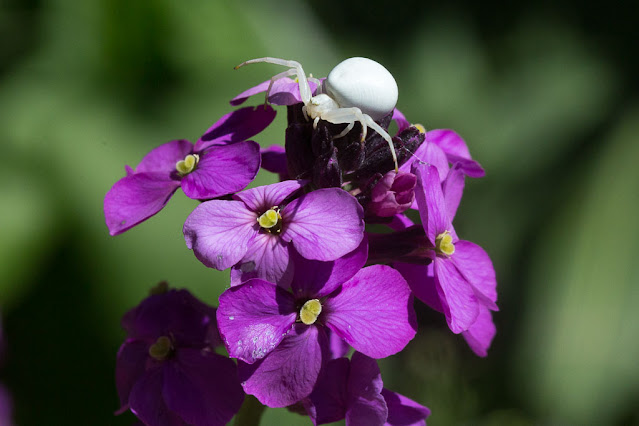 When it landed on one stalk, this white crab spider emerged from the blossom, where it was lurking to capture small insects like bees that come to feed. But the spider didn't go after the butterfly. I guess that was just too much bug.

I had a full day yesterday, consumed with more household tasks. It was one of those days where the minute I finished something, I'd think of something else that needed doing. I sometimes think I'm a little manic that way, to be honest. I've never been good at sitting still, and I can get in these zones where I just go and go. On the upside, I get a lot done! I changed the bedsheets and took them to the laundry, cleaned all the objets and the tablecloth on our front hall table, dusted the bedroom, vacuumed, scrubbed the bathroom and cleaned the floor around the too-small mat I bought for Olga's dog bowls. (Olga is a messy eater, and the mat completely fails to protect the floor.)

I took Olga for a walk and it was a beautiful day, so I thought we'd go to the cemetery or maybe even to the Heath. But Olga had other ideas. She was content with an amble up the high street, sniffing garbage outside Sainsbury's. Such a classy animal. I've said it before but I'll say it again -- it appears our Hampstead Heath days are behind us.

In the evening, we were watching TV when a bee flew into the living room through an open window and made straight for Olga. (It made a beeline for her, in fact!) I don't know why this bee was drawn to the dog, who jumped up and looked alarmed. I was afraid she would snap at it, thus ending the bee's existence, and the bee was persistent in its suicidal obsession. I finally managed to chase it out of the room and then we bathed Olga, thinking the insect was somehow drawn by her not-particularly-flowerlike scent. (Granted we hadn't bathed her in a while, because she no longer goes on muddy Heath walks, so it was probably time.)

Dave kept himself busy too. He came home from the grocery store with two flats of annuals, marigolds and salvia, which he planted in another big plastic pot that the Russians gave us. So now that's in a corner of the patio, brightening things up for summer!
Posted by Steve Reed at 7:16 AM

I love productive days. I’m allergic to bee stings and bees are drawn to me like a magnet. Today’s photos are dazzling. That spider shot is incredible.

A lovely shot of the butterfly.

Have a look at all the different whites there are!
We have just been having a number of orange tipped white butterflies..these are the males looking for females...who have no orange and get mistaken for cabbage whites!

Jeez! All that manic cleaning! That must have been enough to drive Dave bonkers! No wonder he fled to the grocery store. The sound of a vacuum cleaner is worse than an approaching doodle bug during WWII.

Dang it! Wallflowers. Every year I tell myself I'll buy some and every year I forget. And now there isn't room for them in my garden.
I get days when I just clean everything in sight, thankfully not often.

It is a great photo of the butterfly. Well done.

Free accommodation here for you if your can clean so well.

The bee story was fun. Thankfully not a bird or a bat.

You and Dave need to hire out you landscaping and cleaning services.

Wonderful photos today. I'm glad Olga didn't get to snap the bee. She doesn't need a bee sting in her mouth!

No more spider shots please. They scare me.

Well, nothing wrong with having a very productive day. If semi-mania is required to get things done, so be it!
That spider shot is really amazing, Steve.

I need a manic day around MY house. That butterfly's wings are wonderful, almost ruffled.

You really had a busy and productive day there.
Interesting white spider. I don't think I've ever seen a white spider like that.

Both the butterfly and the spider pics are rather spectacular! Of course, the Wallflower is beautiful, too!

Perfect timing on the brimstone shot! The crab spider is a beauty, too. Hard to type this because Clove, my 75lb dog, is insisting on cowering on my lap during this thunderstorm! She does send her regards to Olga.

Dropped my digestive into my coffee when the white spider showed up on the purple flower, such a wonderful thing, that shot!!
Nice that you and Dave are on the same page as garden growing goes. I have given up due to different ideas of how to garden and treat soil. "OK, It's all yours , baby!"
Olga gave the Heath some amusing times, many years of sometimes twice a day.
The heath is a better place having know you and Olga and your camera. We are too! A MUD/Olga calendar would be great!

Your yard sure does look nice. It must be a pleasure to sit out there. Enjoy your day, hugs, Edna B.

That butterfly photo is beautiful. Just reading everything you did over the weekend tired me out.

Terrific shot of the butterfly, Steve! You must be getting close to the end of the school year! Plan some fun adventures that you can share with us!

Both of your photos today are excellent! I've never seen a white spider like that.

I shouldn't have laughed, but your paragraph about Olga and the bee really tickled me. I'd have been more worried about her getting stung, especially in the mouth if she'd snapped at it. Always handy to keep Benadryl around.

Wonderful photo of the butterfly. And so glad Olga missed the experience of an irritated bee sting. And got a bath out of the deal on top of it all!

I need a bit of mania in my own house.

The butterfly is gorgeous. Great capture.

I'm very impressed with that butterfly shot. You can even see the proboscis.

I enjoy gett things done too. I get a feeling of satisfaction when I tick things off my to do list.

I don't sit easily or for long either unless I'm really tired or don't feel well or it's raining. And I tend to work on something til I finish without taking breaks no matter how many hours it takes. Or used to. Don't have that kind of energy or stamina anymore. But when I'm energized, I do the same and get a lot done.

I need to go on a cleaning frenzy but haven't for a while. When I do, I like to clean the hardwood, dust (my most hated chore) and vacuum. After that I like to admire the shine on the wood and the lines in the carpet. Compulsive, no? I love that flower and have never seen either of those critters.

That butterfly looks so amazingly like four leaves connected together. Nature is incredible.

I wish I could get maniacal about cleaning much more often. When I was a young mother I remember doing All The Things every week. I think I used up all my energy then.