No-Mow Most of May 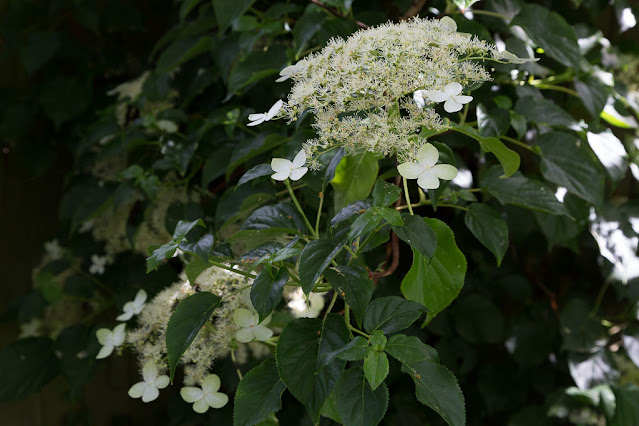 This is one of our climbing hydrangeas, which we've trained to grow up the fences on both sides of the garden. There are two on the fence between us and Mrs. Kravitz, and every year she asks us, "What is that plant?" I've apparently never blogged them before but we've had them for six or seven years.

I spent all day yesterday in the garden, and I have more to do today. I pulled all the forget-me-nots, which had passed their peak and were looking dusty with powdery mildew, and I weeded a bunch of other stuff too.

Oh, and remember "No-Mow May"? 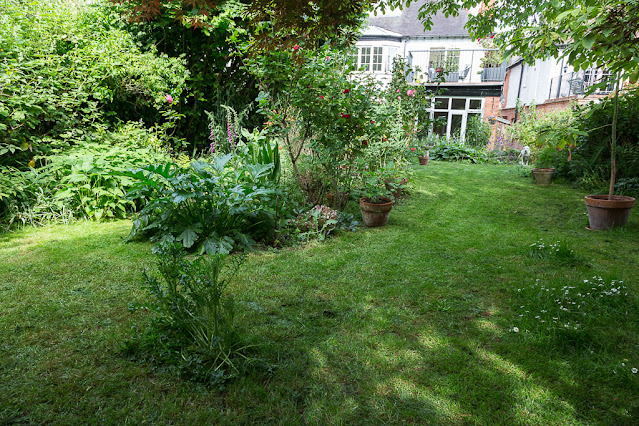 Well, never mind. After I'd neatened up the borders the lawn looked even more terrible, so I wound up just mowing it. I left those patches of daisies and several ragworts, which will bloom yellow later in the summer. We have plenty of undergrowth for the insects. (See Olga in the background on the right?)

And that's pretty much all that's happened around here, unless you want to hear about me doing laundry or cleaning the carpet in the dining room, which I'm sure you don't.

I'm reading a book called "The Believer" by Sarah Krasnostein, which is an exploration of belief -- people who believe in the paranormal, for example, or believe in the literal truth of the Bible. People who believe against all objective and scientific evidence. It's non-fiction and it's interesting -- a very different book. I'm hoping to make more headway in that today.
Posted by Steve Reed at 7:03 AM

I’ve never had climbing hydrangea. Beautiful. I planned to spend yesterday on the terrace. Never did get to that. Maybe this afternoon. The Believer sounds like an interesting read. Coincidentally, I was on a Richard Dawkins interview jag last night.

We are mowing so that things don't get unmanageable, but we do have quite a large match at the end of the lawn full of daffodils which we then leave wild all year round. It's where we find frogs and hedgehogs and other beasties.

I love climbing hydrangeas.
When I ran the bookshop in Portmeirion the cafe over the road in the village had that planted in very large pots and growing up the walls between the windows.

Our meadowy bits of lawn have the spotted leaves of orchids showing already..we are looking forward to seeing what else will show

It's wrong to make presumptions about your readership Steve. I am sure that I am not alone in wanting to read about you doing the laundry and cleaning the carpet. Such things are rarely explained but they are the bedrock of life. What is your preferred soap powder?

Climbing hydrangeas? I didn't know there was such a plant. It's very pretty.

I don't know of a climbing hydrangea. Please write again about the book once you have finished reading it.

Our climbing hydrangea at the last house was a lesson in planting. It grew with enthusiasm but was the wrong choice for where we put it. The plan was that would grow over an arbor we’d put up over a path. It grew all right, but.wanted to grow across the opening, so I was forever trying to bend the woody stems back in the right direction.
That’s one big garden you have.

I'm afraid if we didn't mow for a month it'd be a disaster. We have a little more than an acre and it would be a nightmare trying to re-tame it.

I'm going to look for that book; it sounds fascinating.

The climbing hydrangea is a new one for me, as well.

Okay. Now that book sounds very interesting to me.

Wonderful balance of wild and tame in your garden - it looks like it might have secrets but not scary secrets!

Add me to the list of people who'd never heard of a climbing hydrangea.
That does sound like an interesting book. Strangely enough, I just woke up from a dream in which we were on Dog Island. Some other people had bought our house but we were allowed to go stay there sometimes. They were Mormons! Whoo boy. Maybe I've listened to a few too many hours of Mormon Stories podcast. What a bizarre juxtaposition of my thoughts and interests! They were TBM's- true believing Mormons- and were horrified at my thoughts on the religion. As well they would have been! They did build a pool behind the house which was pretty awesome.

Sounds like a very interesting book. It's more relevant today than ever. People have started to believe in some pretty crazy things.

Sounds like an interesting book. I'm looking forward to reading your review of it.

Looking at your garden and listening to all of the time you spend on it always makes me feel guilty! I have to get out and weed more but I so easily talk myself out of it - too hot, too cold, to rainy, to muggy... yadda, yadda, yadda. I have to just DO it! Thanks for your inspiration!

I've never heard of a climbing hydrangea, either. I love the blooms, but we struggle with growing them. My favorites are when they're blue.

I have to look up climbing hydrangeas. I have a feeling it might be too big for my space, but I'm going to look.

The garden looks very inviting! Maybe that book will shed some light on why so many, many people believe what a known liar like DJT says.

Right now, waiting for seven days to pass before mowing is way too long. I can’t imagine a month.

I can't believe you're reading "The Believer". Though I've never heard of it, I don't believe in it.

Love your garden. I can smell it - all fresh and green. I have bought the book on your recommendation and also purchased her earlier book "The Trauma Cleaner". I haven't read non-fiction for a while and am really looking forward to them.

Mitchell: I read one of his books, "The God Delusion," I think. Pretty much sums up how I feel.

Tasker: I think that's the way to go -- keep the garden and lawn managed but leave part of it wild. We do that too, particularly in the back. I wish we had hedgehogs!

GZ: It would be great on a sunny wall. In fact, now that I think of it, we could plant it in the front of the house where we have a persistent ivy problem. Hmmm...

YP: Well you'll be happy to read the subsequent post, which goes into more detail about household tasks! LOL. (We don't buy powder. We buy those little capsule gel things.)

River: Yes! It is pretty though not particularly colorful, which is probably why I haven't photographed it before.

Andrew: Will do! A lot of it takes place in Australia, actually, where the author apparently grew up.

Marty: The right plant in the wrong place, a common problem! I think it's best for a wall or fence.

Bob: It's nice for places with an open, sunny meadow. Our yard is too shady to be an ideal wildflower habitat so we just wind up with a lot of grass, and the bottom layers turn brown.

Debby: I'll let you know how it goes!

Wilma: It does indeed have nooks and crannies where we never go, which is good for the critters.

Ms Moon: Ha! I feel like true-believing mormons might not build a swimming pool. Wouldn't there be something immodest about swimming?

Red: Exactly! I think that's what prompted her to write it.

Robin: I'll write more about it when I finish!

Ellen D: Well, it's easy in England because the temperatures ARE so moderate.

Kelly: I am not a hydrangea expert but I think they like certain types of soil and certain PH levels. Dave gives them special food which helps adjust the PH of the soil immediately around their roots.

Boud: Yeah, check 'em out. They're really not THAT big, and like any plant they can be kept trimmed.

Sharon: I think that was the impetus for the author to write it. (I might be guessing here, because she hasn't mentioned Trump or Q-Anon specifically.)

Ed: I think it works best when people can grown a sort of meadow with wildflowers. We just don't have that kind of lawn!

Sparkling: Let us know what you think! I am finding it a very interesting read. I would love to hear what you think about "The Trauma Cleaner."

I love mowing so I couldn't give it up for a month, except in winter. That book sounds fascinating, but it would probably make me mad.