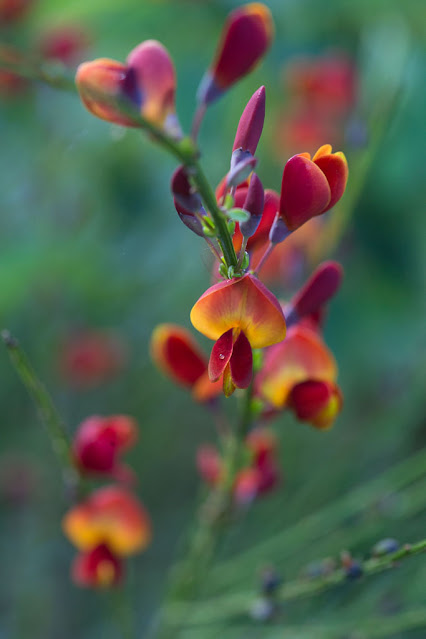 I barely left the house yesterday -- just long enough to try to walk Olga, who once again was content with a short amble around the corner. Otherwise we hung out in the garden, where I wandered with the camera, so that's where today's photos come from.

First, our broom is flowering with its red and yellow pea-like blossoms. See that little droplet of water on the in-focus flower? I love that. 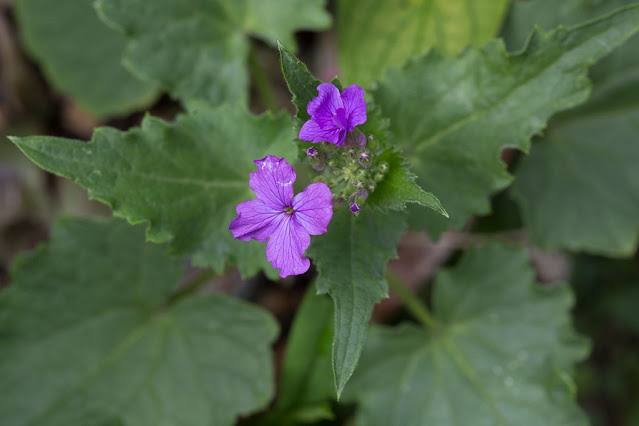 This is another honesty plant that came up of its own accord in a houseplant in the living room. I have no idea how that seed got in there, but that's the mystery of plants, right? Anyway, we moved it outside and now it's doing its thing and producing flowers. 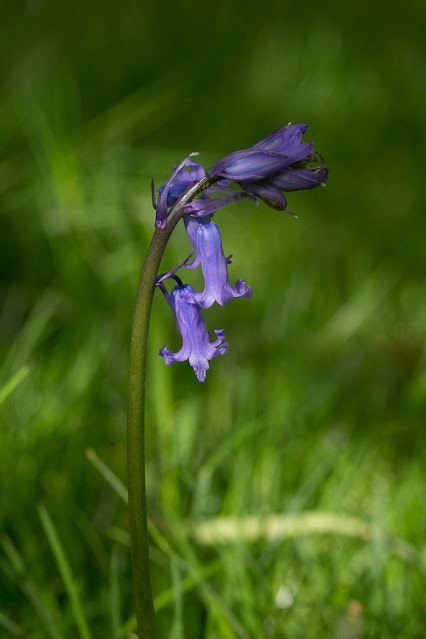 This little bluebell came up in the middle of the lawn. I swear I've never seen a bluebell there before -- certainly not a flowering one. It's in a vulnerable place but we're doing our best to steer clear of it. 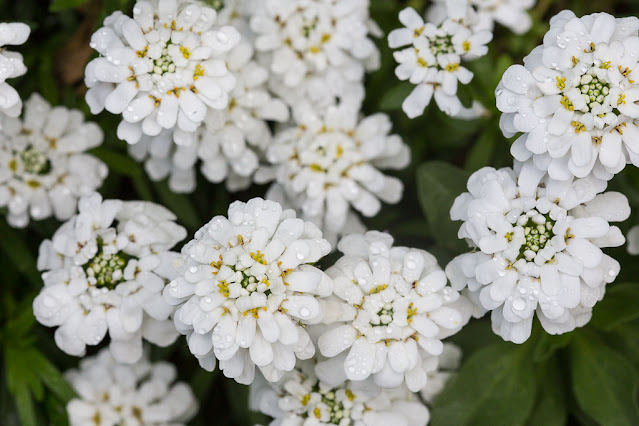 The candytuft is flowering abundantly... 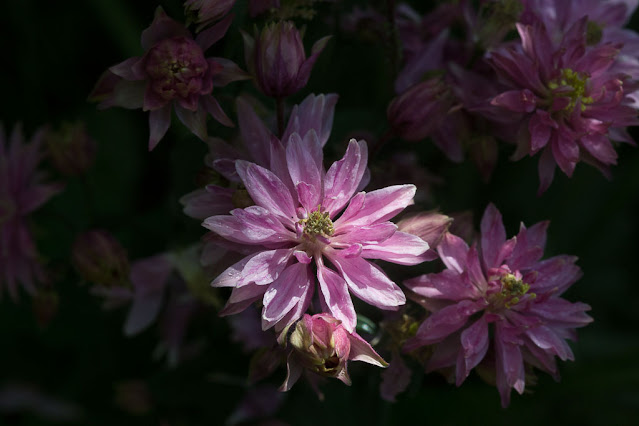 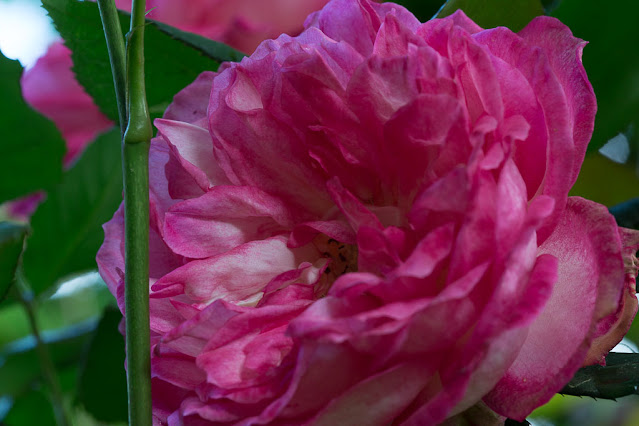 Every year I try to photograph our first rose. This year we had two simultaneous flowers on the same bush. (You can see one behind the other here.) The other rose bushes all have buds, so it looks like we'll get a good display. 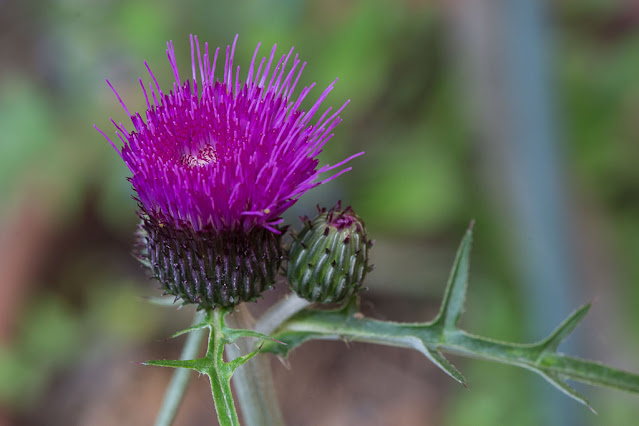 Our brook thistle is flowering... 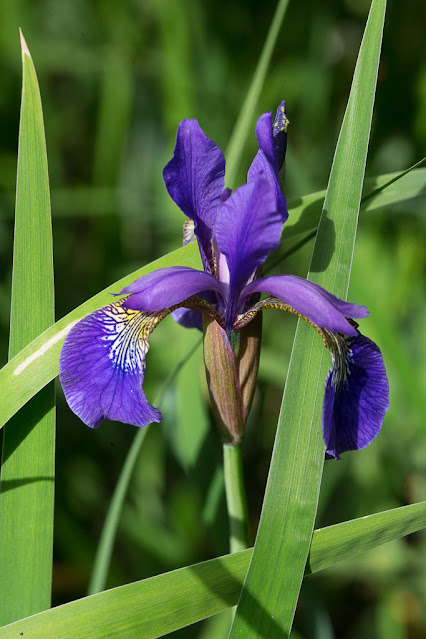 ...as are the blue irises, despite the fact that Olga keeps walking through them.

Our banana tree, which we repotted a couple of weeks ago, has been looking terrible. I think it's been waterlogged -- the new pot comes with a saucer that's been pretty consistently full of standing water. So yesterday we removed the saucer and a bunch of water flowed out of the pot. Hopefully this will revive the plant. I'd have guessed bananas wouldn't mind soggy soil, but maybe they do.
Posted by Steve Reed at 6:07 AM

These flowers and your photos are especially stunning. Wow!

I know that, although banana plants like to be kept moist, they shouldn’t be soggy (root rot). I’m sure we’ll see beautiful photos of a happy banana plant this summer.

A person who loves flowers is called an anthophile. And that is what you are mate! Don't worry - you can get treatment for the condition.

Perhaps my first comment has gone to "Spam". It was there but now it's not there.

Mitchell: Hopefully we drained it in time! We should have known better, to be honest.

YP: It was indeed in spam, but as you can see I've published it. Darn Blogger! I've never thought of myself as an anthophile but I will embrace the term proudly.

Lovely flower pictures. My honesty doesn't seem to be coming up this year. Unless that's it in your houseplant. Mystery of seeds.

Beautiful flowers..I look forward to our roses blooming in a couple of weeks or so

All that color and yet it was the candytuft I liked best.

Beautiful! I don't think I've ever even heard of a candytuft and yet...there it is. What an interesting plant.

Beautiful photos!! Especially that first one, it's stunning. I love the iris too. There is a lot of flowering going on at your house.

I think only marsh plants like wet feet. some lovely things blooming in your garden.

Your flower garden is so beautiful. I love all the blooming colors there. Hope all goes well with your banana tree.

These are all gorgeous pictures, but the candytuft is a new one for me ... the petals, with the dewdrops on them, look like opals or some other white jewels!

The broom flower is a beauty. They all are. So much color in your garden now! That aquilegia doesn't look like aquilegia I am familiar with.

Lovely lovely lovely! I keep thinking I should do a flower only post so I can properly showcase some of Mike's photography.

They're all beautiful, but the drops of moisture on the candytuft make for an especially lovely photo.

I wish the bluebell luck. I've often had a dog plow through something like that in the middle of the yard. Based on your comment about the irises, Olga may well trample it, too!

I love the miracle of flowers--their different colors and shapes. That's a beautiful broom. I've only seen Scotch broom which is bright yellow.

You have some beautiful plants in your yard. It musts be nice to sit out there with all these pretty blossoms. Enjoy your day, hugs, Edna B.

Not only are plants beautiful but they keep you occupied and interested. and once in a while you learn something along the way.

Those photos are nice and your flowers pose so perfectly for you! Well done!

I enjoy your flower pictures. The lilacs are just coming out here, and the smell is heavenly.

Boud: If that's your honesty, that WOULD be a mystery! In fact, we should change the plant's name to "mystery."

GZ: You're a couple weeks behind us, I imagine.

Bob: Candytuft is a very cool flower. It was here before we came and we like it.

Ms Moon: It is interesting. I have no idea whether it would grow in Florida.

Sharon: The flower season is ramping up!

Ellen: Well, I thought a banana WAS a marsh plant. We used to have one growing down by the lake when I was a kid and it was flooded part of the year. But I guess it's different when it's in a pot.

Robin: I will report back on the banana once we learn its fate!

Marcia: Apparently the name comes not from candy the food, but from Candia, the former name of the city of Iraklion on Crete. (I just read this on Wikipedia!)

Wilma: We have a couple of aquilegia plants and they all have different flowers. Some are much more columbine-like, with the upward-swooping petals.

Bug: Absolutely! Do it! No one dislikes seeing flowers.

Kelly: Surprisingly she hasn't flattened it yet. Bluebells are surprisingly tough, too, so unless she breaks it off (a possibility) I think it will be fine.

Margaret: This is the same plant, I believe, but a reddish hybrid.

Edna: That's exactly what I do at the end of my workday -- spend some time on the garden bench!

Red: I am always learning something new about these plants!

Debby: We have lilacs nearby too! Mrs. Kravitz has a bush and I pass several on my walks home from work.

What is that gorgeously colored plant in the first photo. It's hues make me want to pick up a paintbrush!