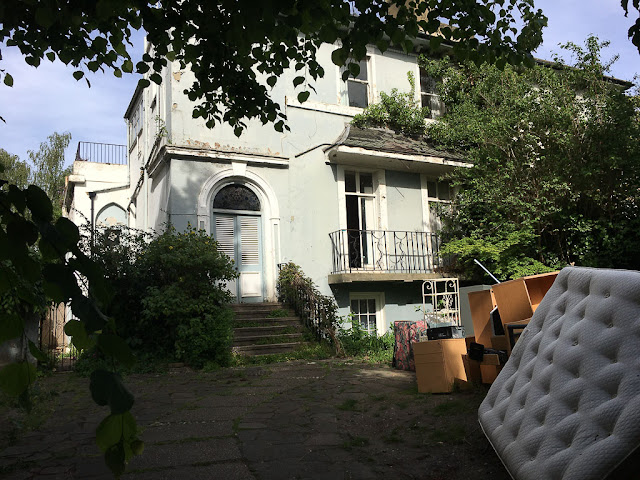 I often walk past these mysterious semi-detached houses on my way to work. They're on a prominent corner in the heart of St. John's Wood, which is a very expensive and desirable neighborhood, right up the street from Abbey Road Studios -- and yet the place is kind of a wreck. There's been a pile of old furniture sitting outside for months now, and as you can see the building itself needs some work. The house on the right, behind that tree, is boarded up, and I thought the one on the left was vacant too -- but when I took this picture one of the windows was open, so who knows?

(This is the place with the beautiful stained glass window over the front door -- you can see it in this shot.) 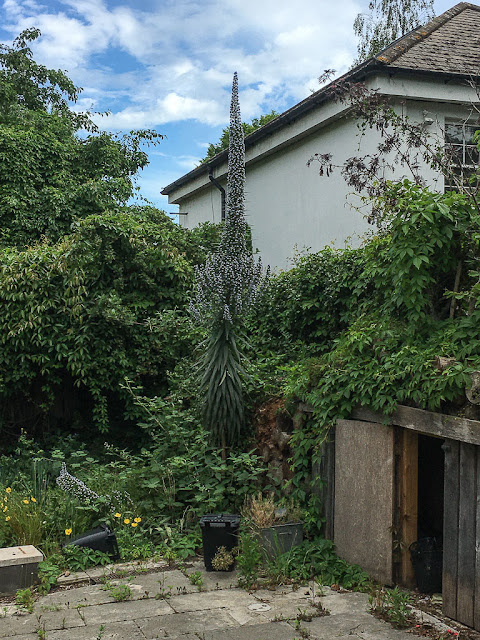 It has a large and dramatic Echium in the back garden. I love those plants. We should get one. I think they only live a few years so it may not be a permanent fixture.

In any case, I am curious about this place and why it's been left in such disrepair, given that it's a multi-million-pound property in a very well-manicured area.

Thanks for your comments on my post yesterday about my DNA test results. I've done more reading about it, and apparently it's not unusual for white Americans with roots in the slavery-era South to have some African DNA, and for blacks with similar roots to have European DNA. (As commenter Claudia noted, "Rape was rampant in the slave system.") I've read that a ratio of one percent suggests that this DNA came into my family tree about seven generations back. We've done our family tree, so now I'm looking at those names and wondering what I don't know! (Of course it's quite a few people and we don't have all the names -- and if this was the result of an illicit extramarital coupling the name wouldn't even be there.)

Anyway, it's quite fascinating. It makes me ponder all the flawed thinking surrounding the concept of race. By Jim Crow standards -- the ridiculous "one drop" rule -- I suppose I'd be black!

Another thing I didn't realize about those tests is that they only reflect DNA from the past several hundred years. Because we get 50 percent of our DNA from each parent, half of their DNA doesn't get passed down to any given child, in which case it just falls by the wayside, as I understand it. DNA from more than a few hundred years ago would fall out of the system, so to speak. So I'm not sure about my theory that my Scandinavian DNA comes from the Vikings.

Work has been busy this week. I'm on my annual campaign to get overdue materials back before school ends in just less than a month -- with varying degrees of success. Also, for some reason my work computer has been blocking some blogs lately -- it's an automated function of the filters the school uses to screen inappropriate web sites, and has nothing to do with any given blog's content! It's been making it difficult for me to keep up with blog-reading, but I'm trying!

I see houses like that and immediately begin to fantasy about rescuing them. I, too, wonder how it can sit like that in such a prized location. I don’t understand the science of DNA at anything but a very basic level. SG is involved in a study of a famous line connected to his family. DNA scientists are studying it and using his DNA to prove or disprove paper-trail connections going back to 1288. He understands a lot more than I do, but he, too, gets lost in their explanations.

The reason those semi-detached mansions are in such a bad state of repair is simple. They are haunted - following a double murder in the nineteen eighties. Both homeowners were cruelly speared with an echium plant. What a way to go!

The echium might die but it could be one of those plants that breed a baby next to the original plant.

I wouldn't worry about the house becoming dilapidated. At some point the owner will make a killing by turning the building into something very desirable, and of course expensive.

Why do I think my blog is one of those blocked!

I live in an old river town full of decaying houses that would be the stars of the town if kept up. I usually suspect an elderly person lives there and just can’t keep up with the upkeep anymore or it is being rented out. It takes a lot of money to keep ornate houses in good repair.

I'm having the same problem at work with blogs as well, on my phone. I thought it was the only one.

Shame those homes are falling into disrepair. I always like to see homes saved. But maybe someone is trying to buy the block for a teardown situation? I'd hate to see that.

That old house is a shame. A whole summer stretching in front of you both. What a feeling that must be!

I wonder if it was an investment buy, by a foreign owner. Possibly money laundering was involved. There may be squatters at this point. Good luck to them. You can see how I instantly assume crime!

It's sad to see old houses with good bones become derelict. But the repairs and upkeep can be crushing!

It's so sad when people let houses get dilapidated like that, especially such lovely old homes.
There is one blog that I used to read, but the last time I went to that page my Bitdefender security system said UNSAFE SITE. So I've never been back. I wonder why some blogs seem unsafe these days?

People get old, they run out of money. Here they just don't sell property. Many houses and commercial buildings in this town that are vacant and decaying that no one lives in, that they refuse to sell or fix up. Family member dies, they just lock the door and walk away, contents intact.

There is no such thing as 'race', just the human race. It's a completely made up concept. I remember some kind of performance art where a container of some sort was set up that showed an x-ray as you walked through. you would see the person enter, watch their skeleton walk through and then see the person exit. No matter color or ethnic origin, all the skeletons looked the same.

My first thought on the houses was that some Russian oligarch bought them and wants to tear them down and build something more befitting to a Russian oligarch. Perhaps the war has interfered with those plans. Or maybe not.

That house really is a mystery. It looks like it would be worth millions of pounds so leaving it sit empty like that makes no sense.

It's a glitch. Some of the blogs I read regularly show this once in a while. I try a day or so later and they're fine again. I've even had it happen when I tried to open my own blog, reported to the blog site, they fixed it.

I'm surprised a pricy neighborhood like that tolerates homes in such disrepair. Then again, I'm not sure what steps individual homeowners could take to keep it from happening.

Interesting comment about DNA ... things I didn't know about.

I love the balcony of the mansion

That house needs some love, and you and Dave are just the men for the job!! I will come and help you paint.

I clicked back to see that window, it's gorgeous! The house is just crying out for some TLC. Why aren't the owners doing anything about it? shame on them. If they can't afford to fix it up, then at least sell it to someone who can.

Mitchell: I would love to have a knowledgeable person explain the intricacies of DNA to me, and what these results could mean.

YP: Those plants DO look rather lethal...

Andrew: Believe it or not, yours wasn't one of them!

Ed: Yeah, I imagine maintenance on these places is a nightmare. Our flat is tiny by comparison and yet we always have things that need attention.

Pixie: Interesting. And presumably we have different site-blockers. (Or maybe not.) Ours is meant to block pornography and that kind of thing, but why it picks some blogs is a mystery to me!

Bob: I wonder. But these two houses together would cost something like £10 million.

Debby: I am SO looking forward to summer...and it's always over much faster than I expect.

Boud: It could very well be a foreign owner. A lot of London properties fall into that category, especially in neighborhoods like this.

Margaret: I'm sure they can!

Robin: It's something about the security protocols of the site, and I don't really know how all that works, but my hunch is that site is probably fine and its security credentials were somehow corrupted or out of date.

Ellen: Yes, race is an utterly invented concept. I mean, we all have physical differences, but the lines between these designations are so arbitrary.

Ms Moon: I had that same suspicion, especially about the boarded-up one!

Sharon: Maybe it would take so much to repair to rent it out that the current owner can't afford it.

Boud: Interesting! I think in our case it has more to do with our school site-blocking software than with the blog or Google. I never have it happen at home, for example.

Kelly: I don't know anything about code enforcement in London. My perception is that there are a lot of homes like this that are allowed linger in a sort of limbo.

John: It does have nice balconies and there's apparently a terrace at the back. But I mostly love that stained glass.

Linda Sue: When I win the lottery! (Which I never play!)

River: I think that's what they're trying to do, actually. After I wrote this I found a real-estate listing for it, which I'll link to in an upcoming post.

Almost certain this is one of those when someone buys the place to park their surplus money. A lot of foreign "investors" as the government calls them (ie money launderers), do this in pricey areas of London. if you want to really see some derelict super expensive mansions go to the Bishops Avenue by the Kenwood side of Hampstead Heath. There are also some on Avenue Road leading from Swiss Cottage down to Regents Park. there is also one at the roundabout at the top of Heath St. near Jack Straws Castle. all of them worth tens or hundreds of millions. They're not seen as homes, just as assets that can be sold on when needed. (I am not sure that Jack Straws isn't one too, it seems to be empty). Many of the buyers were Russian oligarchs so I don't know what will happen to their houses, so maybe there will be some hope for this one. Fingers crossed. It is beautiful. I love the photos of your garden, wish I had your green fingers!