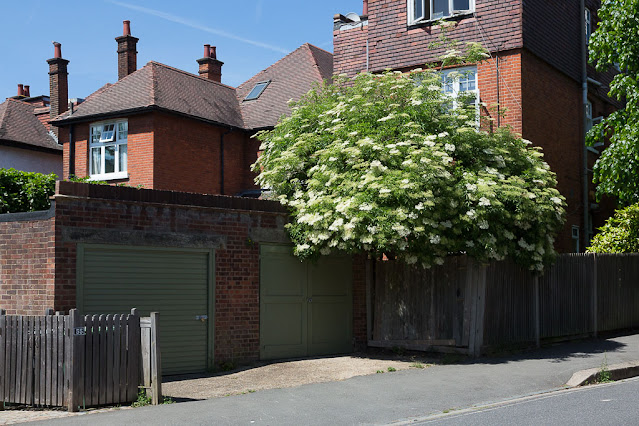 I was walking to work one morning this week behind a father and his two young daughters. They were practicing spelling. The father would give each girl a word and she would spell it and use it in a sentence. The older girl got the word "intention."

Her sentence? "It is my intention to push you down the stairs," she said, gesturing at her sister.

This has been an exhausting and somewhat dispiriting week. Aside from the news, which was bad enough, our whole school seems to be running on empty. There's such a whirlwind of activity at the end of the year with everyone trying to finish papers and projects and put on plays and concerts. (Dave's high school concert is tomorrow, and I'll be attending that.) We just gotta get this school year done.

I'm making progress on collecting overdue materials, but of course not as much as I would like. I also cleaned out the library lost & found bin yesterday and set everything out on a shelf, hoping that putting it at eye-level would help students see their stuff and take it home: 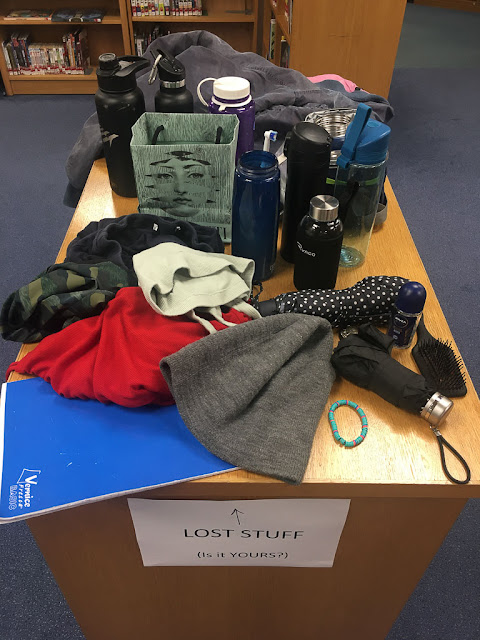 As usual, water bottles are a big part of the problem. A lot of that stuff has been in the lost & found for months, so my guess is even if the kids know it's there they probably don't want it. Perhaps you recognize that lunch bag from last fall -- someone took one thermos but left the other behind. And some of it's pretty weird. Who lost their electric toothbrush in the library? Their hairbrush? Their deodorant?

(Probably all the same person.)

I checked out a stack of books for summer reading, maybe more than I will ever finish:
1. "Hidden Valley Road" by Robert Kolker
2. "The Tender Bar" by J.R. Moehringer
3. "The Great Believers" by Rebecca Makkai
4. "A Dutiful Boy" by Mohsin Zaidi
5. "The Wych Elm" by Tana French
6. "The Secret Place" by Tana French
7. "Ready When You Are" by Gary Lonesborough
8. "Crossroads" by Jonathan Franzen
9. "All Over But the Shoutin'" by Rick Bragg

Some of those have been on my reading list for years -- the Bragg and Moehringer books, for example. We don't start summer checkouts until June 6 but I figure it's a perk of my job that I can grab mine early.

I walked Olga a couple of mornings ago and she had fun sparring with the neighborhood cats:


Did you see the cat in the distance on the sidewalk right at the beginning? That's what she was chasing. And you could probably hear another cat spit behind that door, which is what prompted Olga to return for the attack. I've talked a lot about how low-energy she is these days (in fact she's still in bed as I type this), but as you can see, when it comes to felines the adrenaline still surges!

(Top photo: A blooming elder up the street from our flat.)
Posted by Steve Reed at 7:49 AM

So nice to see Olga doing the hustle. Maybe you need to get her a cat.

Please mail my electric toothbrush and deodorant. I’ve been without for months now. You can keep the hairbrush; I find I no longer need it.

I saw the first cat but couldn't hear the second. nice to see Olga is still lively.

Maybe Olga would like to try a genuine can of cat food (i.e. containing stewed or minced cats!). I think I would have written "ITEMS FOUND IN THE LIBRARY" on the A4 sheet and not "LOST STUFF". I'm just sayin'.

Yes, I was going to say Olga looks so spritely. She will go on for a good while yet.

I would selectively reduce the pile of found items into a rubbish bin.

So many water bottles in the lost and found!

Also love that girl's use of the word 'intention.' She sounds like me!

Long ago we had a cat that would taunt the dogs we were dog-sitting by casually grooming just on the other side of the wire fence. One back leg nonchalantly straight up in the air as she slowly washed like an exotic dancer of a cat, she would tempt and entice the poor dog. Olga would have loved it!

That's quite a stack of books for the summer. I wanted to read The Tender Bar but my library doesn't have it.

I love how you are running with Olga to chase the cat! You are a patient owner who lets her explore. How sweet!

I knew there must be a cat back there when she did a one eighty back to niggle at the door again! Thanks for the reading list. Noted.

There's still life left in Olga. That little cat face, under the door, too cute. Have a lovely summer holiday. Perhaps you could have a boot sale, but I don't think you guys have a car, and sell off the lost and found stuff:)

Olga and the cat! She certainly does get excited at the prospect of catching one. Or maybe she just has a deep desire to befriend one. They could play and cuddle.
Goodness but kids sure do leave a lot of stuff behind!
Good luck with your summer reading! Let us know what you think about those books. Some of them I've been meaning to read too.

That is a cute video of Olga's cat-chasing energy. She really does look very happy to be on the prowl.
It's interesting to see what the students leave behind. Electric toothbrush and hairbrush? Sounds like someone is camping out there somewhere.

Kids and lost and found. You could write a book about it. Some kids would take a whole chapter.

OLGA girl- she looks great and feisty enough to drag her hoomin around. Good to see her. Your list of books is ambitious, as usual.

The end of the year--oh, how I remember the stress. Ugh. We read "The Great Believers" in Book Club and I loved it.

I love seeing Olga enjoying a cat-chase. The video made me smile.

I loved the Rick Bragg book, but when I picked it for my book club, there were quite a few who hated it! I look forward to hearing what you think of it.

What a mix of forgotten treasures! Yes, I suspect some are intentionally forgotten. But nice you can check out the books before everyone else gets their chance! Gotta have job perks!

That Olga -- there's a lotta life in the old girl yet! It's all a matter of priorities!

That episode with the spitting cat made me laugh! Poor Olga!

Mitchell: I'm going to mail you a couple of those lunchboxes too, mmmmkay? I put too much work into cleaning those things to see them go in the trash.

River: It's just a very brief sound, almost like a pop. It's the cat spitting behind the door.

Andrew: She has her moments! I think some of the lost stuff could rightly be thrown out.

Colette: It's insane and actually one of my pet peeves. Re-usable water bottles are only ecologically sound IF they get re-used!

Padre: Glad you liked the vid! The hopping-pulling is a classic "excited Olga" move.

Wilma: Cats know when they're out of reach.

Ellen: I'm surprised, since it was made into a movie not too long ago.

Boud: Yeah, she heard that cat spit a warning from behind the door!

Ms Moon: Olga's brand of "friendship" would entail bloodletting, at least with cats and squirrels. It's INSANE how much stuff those kids abandon.

Robin: I'm guessing someone emptied their gym bag into the lost & found, or it spilled or something.

Red: It's true! LOL! If I were a parent I'd write the kid's name on EVERYTHING, even if he/she was a senior in high school!

Linda Sue: She definitely drags me, especially when she sees something that excites her!

Margaret: So glad you liked that book! I'm excited to read it.

Kelly: Oh, interesting. I remember when it came out it was very popular.

Jeanie: I wonder why, rather than "forgetting" and/or abandoning something they don't want, kids don't just throw it out?

Catalyst: She hates that cat! LOL