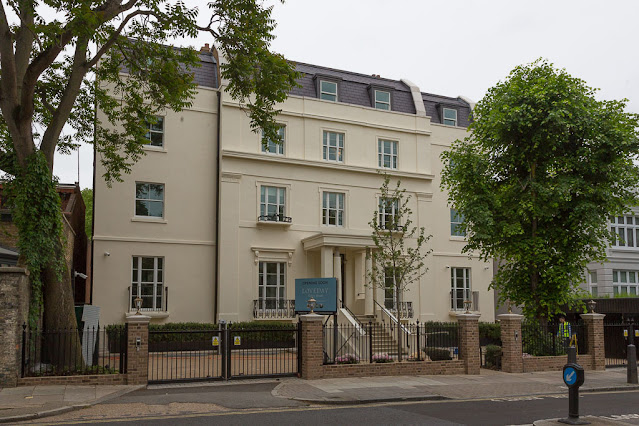 This isn't the most exciting photo in the world, but it's the only one I have to blog at the moment that wasn't taken in our garden -- and I think we need a break from the garden, don't you? This is a building that I pass on my walk to work. Back in March of 2017, it was a somewhat down-at-heel, slightly lopsided building of flats and it looked like this: 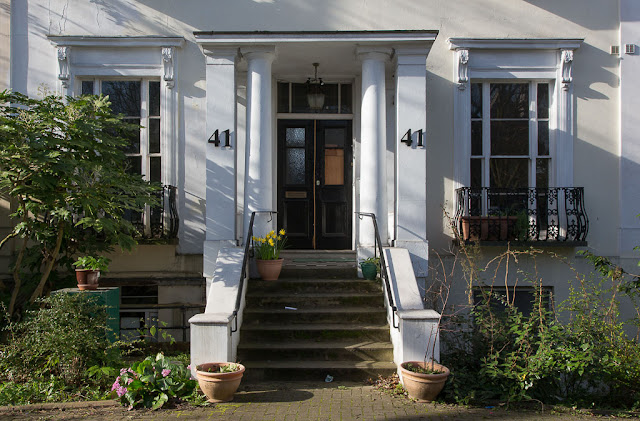 Then, a huge renovation project began and by January 2020, it looked like this: 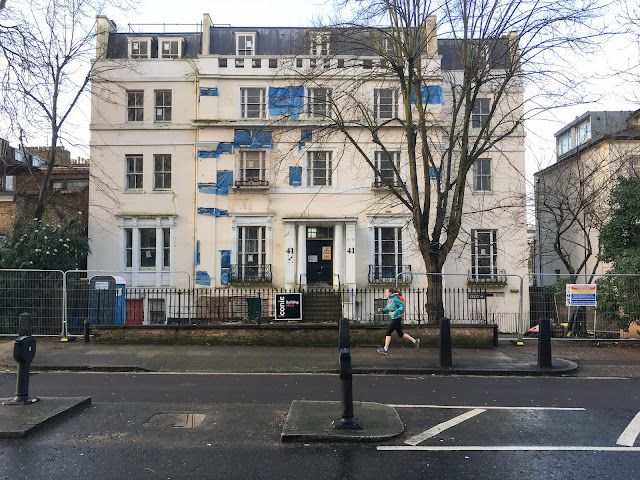 It turned out not to be a renovation, exactly. More like a demolition. The owners knocked the whole thing down, except for the central section of the front wall, which they left standing. Here it is in August 2020: 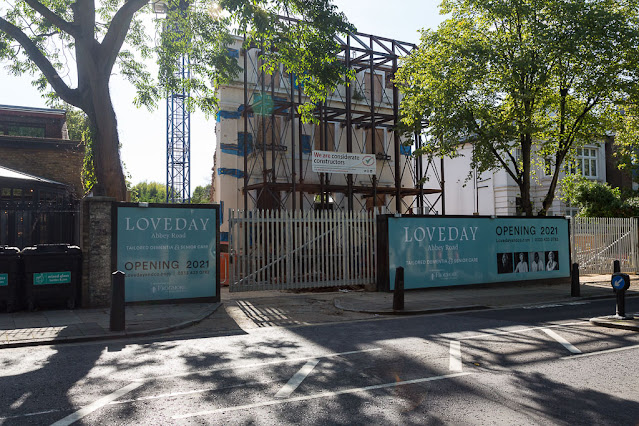 You can see the big signs announcing that it's to be a senior living center offering "memory care," opening in 2021.

Well, it didn't open in 2021, and it's still not open. But at least it seems pretty much finished, judging from that top photo, and there's a web site touting all its amenities. According to the site it's supposed to open this summer.

It's been interesting to watch this project unfold over a period of years. I must admit the new building looks good, and much less crooked!

Dave had a student concert last night and has another one tonight, so I'm fending for myself in the evenings. We have plenty of leftovers in the fridge so I'm hardly starving. I'm taking the opportunity to watch movies that I know won't interest Dave. Last night I watched a documentary about a British expedition to climb Mount Everest in 1975 -- I wanted to see it because the guy whose trunk I rescued several weeks ago was part of the expedition's transportation team. He didn't feature in the movie but it was still interesting, even though I have no desire to ascend a mountain (particularly that mountain) myself.
Posted by Steve Reed at 7:01 AM

That is a fine looking building now. my freezer is full of 'leftovers', extra potions of whatever I cooked. But tonight I'm having a cold roast beef sandwich for dinner. It's the last of the beef pot roast I cooked back in February.

They have done that with a few Victorian and Edwardian buildings near the centre of Cardiff, where the structure wasn't sound, but the facade fitted in with the rest of the street and in some cases listed.
I suppose that it is a fair compromise, especially where a new concrete box would stick out like a sore thumb

They did a great job saving that building. From the looks of things on the website, it’s going to be very high end. I find it interesting that they’ll be offering “tailored dementia.” That’s a new one for me. After finding that trunk, I would be interested in the documentary, as well.

How old are you and Dave now? Perhaps you should consider putting your names down for Loveday Abbey Road. There'll be carers on hand 24/7.

Fabulous Before And After Shots - Watching Movies With Olga Girl , Delightful - Well Done

Those that risk their life to climb Everest fascinate me. As an engineer, I can’t overlook the odds of death on that mountain.

I like that they saved the facade and the look on the street. I wonder how much it's costs for care. It's looks bloody expensive.

I'm glad it wasn't torn down and replaced by some nondescript monstrosity.

We use the term "memory care" here too and I always wonder a bit who came up with that one. Rather strange shorthand for tending to someone who has lost their memory.
The building looks nice and I hope that it is filled with comforts for those people who will spend their last years there.

It seems a shame to take the whole building down but maybe it would have cost more to bring it up to date than starting over.

The new building with part of the old facade looks lovely. I bet it would have a nightmare to renovate the interior.

How bizarre that they knocked down the entire building except for that facade.

I had missed your post about the trunk, so many thanks for proving the link.

That documentary sounds interesting although mountain climbing baffles me. I don't like the cold, plus I'm terrified of heights. :)

keeping the face of the house is just bizarre, I am sure that what was torn down was probably worthy of renovation. Just weird. Your blog is the only one I can leave a comment on without google or blogger telling me I am anonymous. that, too, is weird.

How interesting that they demolished the entire building but for a portion of one wall, and rebuilt everything from scratch to look much as it did before, only new. A memory care center sounds like it might be deeply welcomed by families dealing with loved ones with dementia or Alzheimer's.

Also fascinating: you actually own a trunk and artifacts from that historic expedition. Wow!

I have never understood the desire to climb mountains. I'm pretty much not into anything extreme, though. (including politics! 😂 )

It's a fine renovation, turning rough looking building into something beautiful. Someone has spent a lot of money and will be hoping for a good return.

Susan from the Pacific Northwest said...

I just watched a documentary on the first female Sherpa to climb Everest, "Pasang, In the Shadow of Everest". It was at a film festival, and hasn't found distribution yet, but keep an eye out for it. It was excellent and inspiring. And I don't get climbing mountains either.

I can see why that doc intrigued you. And watching the home go up over time would be really interesting. It's quite lovely.