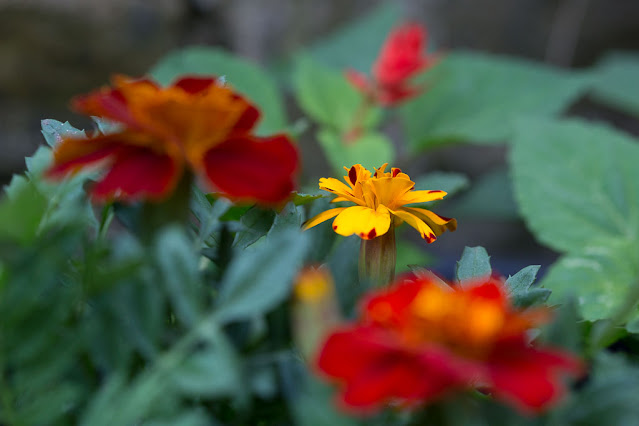 Here's a shot of the marigolds and salvia that Dave planted over the weekend. They're a good combination, with all those fiery reds, oranges and yellows, aren't they?

I finished "The Believer" yesterday, Sarah Krasnostein's book exploring the nature of belief. I really enjoyed it, though as I wrote the other day it's kind of a peculiar book. It tells several stories simultaneously in very brief chapters, jumping from one to another and then another, and then back to the first again: a group in Australia exploring paranormal events; Mennonite missionaries who bring their message from rural Pennsylvania to the Bronx; the people who run the Creation Museum and a life-sized reconstruction of Noah's Ark in Kentucky; a woman whose pilot boyfriend vanished along with his plane off the coast of Australia in 1978, an event that some believe involved a UFO or abduction by aliens. There are others, too. Krasnostein writes of them all respectfully and dispassionately, though occasionally revealing her own skepticism, and I think her skill lies in giving enough detail to be engaging but not so much that the stories become weighed down. It's all very readable.

Maybe because that book required intellectual engagement, I came home last night and (while Dave conducted another student concert) watched the first two "Hangover" movies -- I needed some anti-intellectualism to balance out my day!

I am so ready for school to get out. I feel like this year is really dragging on. I'm still struggling with some kids to get them to return their books. There's nothing like e-mailing a kid every week for a month or more, and speaking to their homeroom teacher, speaking to the kid in person and giving them a printout of the books they have out, e-mailing their parents, and then having that kid show up at the desk saying "I've turned everything in!" A quick look at their account shows that NO, they actually haven't turned everything in, in fact they've returned only one of three overdue books. It's like I'm screaming into the freakin' wind.

I'm sure I'm singing the International Librarians' Lament when I say this, but I will just never understand how people can be so disorganized with library books. I can maybe see losing one library book, leaving it on the tube or on an airplane, but how does someone lose five of the last ten books they've checked out?! HOW DOES THAT EVEN HAPPEN?!?!

Anyway, yeah, as you can tell, I'm feeling a certain degree of year-end frustration!
Posted by Steve Reed at 6:35 AM

That library delinquent would have driven me crazy by now. I was considering getting “The Believer,” but then you mentioned intellectual engagement. I don’t know if I can muster any. So maybe not right now. Exquisite marigold photo. You’re a man of many talents.

You can only keep trying to get books returned. I thought maybe the offenders should be banned from any more library loans, but who wants to discourage kids from reading.

I remember the Frederick Valentich disappearance quite well. The mystery is brought up every so often here.

I never lost a library book in my life, nor did my kids. I did have one daughter unable to borrow books from any of the five city and suburban libraries she was a member of, because of unpaid fines. I paid for her, but warned her to never let it happen again.

I remember the time I asked my son to return a video on his way back to college. A small task.

Two months later, I was notified of an overdue video with a ridiculous fine. I called him and he said, "Oh yeah..." ARG!!!!!

I told them the video was lost. Replacing it was cheaper than paying the fine.

People are just as bad with personal books they've borrowed. I long ago started refusing to lend books if I ever wanted to see them again.

I thought the year flew by but then, I’m not a librarian. My kids weren’t allowed to take library books into their rooms for many years because I was afraid they would lose them in the chaos. But with time, both have shown themselves to be responsible so I have relaxed that rule.

I used to scream silently in my head when my high school students would shrug about returning library books, as though it was all a big joke.

I have no idea where this year has gone.
The other day I was talking to a co-worker about an event we had the "other day" and she reminded me that we had that event in January.
Oy!

I feel your pain in relation to doing every damned thing you can think of to get loaned out library books back. And then to have a kid lying through his or her back teeth when declaring, "I brought the books back!" It is at that point one should set a pack of slavering rottweilers upon them.

Yes. Five of ten books is ridiculous. What happens if he doesn't return them?
That is a very nice combination of flowers and colors. Dave chose well. You photographed them well.
School will soon be over. You'll be able to breathe again.

The shallow plane of focus you chose for your photo works beautifully! The rich reds perfectly set off by the glowing gold.

I'm surprised that some people don't return library books. It's not like houses are full of books anymore. Everything is so digital. A library book should stand out among all the iPhone and iPads.

That book sounds even more intriguing from what you shared today. I looked for it at my library yesterday and could only find one of hers (The Trauma Cleaner), so I tagged it instead.

I've never understood not returning library books. And when it comes to the digital library, I always return mine when I finish reading them and never keep them the full 14 days. Especially if there's a waiting list!

You need to step up your came and email the kid and their parents daily, if that doesn't work, go to hourly. It works. The insurance company came around and the work in our rental has been expedited after months of being in limbo. I can be very annoying:)

The flowers are gorgeous.

I guess the answer to losing so many books is -- don't let anyone take out books if they already have a book (s) out. Books out must be returned before anymore books can be taken out. Would this help? Enjoy your day, hugs, Edna B.

I don't understand the book thing either. I have always been aware of due dates and made sure I was on time but I had a friend who always paid fines. I never could understand that.

Sorry your library users are so careless with their books. Are there monetary penalties? Banning from the library? Soon, it will be over, there will be summer.

That's very irritating. Being ultra responsible, I don't understand it all--but many have become heedless about losing or damaging things. Never their fault.

The photo is rather magnificent.

the end of the school year is always very frustrating. I found it stressful and I wasn't a librarian. However, I'm quite familiar with the little confused disorganized guys. Things neve seem to work out for them.

I never had a problem with returning library books on time until I was an adult, and at the same time, a young parent. I could never count on having time to finish them in the three weeks lending time, and I hated the rigamarole of calling the library to extend the time, and often still not finish the books. Eventually I gave up using the library and haven't been back in probably thirty years. So it's not just school kids that don't return books on time :) And maybe it's not necessarily being irresponsible, although ... yeah, maybe it is, if they don't seem to even care. I like Pixie's idea of daily emails to put the pressure on!

Mitchell: Well, I don't want to overstate it! It's not scholarly writing, just intelligent writing.

Andrew: I had a feeling you'd know the Valentich case! We actually DO prohibit further borrowing until extremely overdue items are returned -- but that doesn't always work to bring them back.

River: I've never lost a library book either. I guess that's why it's so incomprehensible to me.

Debby: I think this happens a lot!

Boud: It's true! Loaning books to friends is the quickest way to end a friendship!

Ed: Are kids' rooms really that bad?! I don't think my room (or my brother's) was ever that out of control! LOL

Marty: Well, that's a HUGE part of the problem. A lot of them just don't see it as important. They see books as very disposable objects.

Bob: I've done that too! "The other day" is a very flexible phrase. :)

YP: Yes! I NEED THOSE ROTTWEILERS!

Ms Moon: You correctly surmised it was a he! LOL! We won't allow him to check anything else out until he clears the account by either returning the books or paying for them. But I think from now on I'm going to restrict him to one book at a time.

Wilma: Thank you! I could see the effect I wanted in my head before I even took the picture. I wanted something different from just a straight shot of the planter.

Robin: Exactly! WHERE DO THEY GO?! I think a lot of times kids just can't be bothered to bring them back and think it's easier to pay for them. Which drives me nuts.

Kelly: I've ordered "The Trauma Cleaner" too! It sounds fascinating!

Pixie: I do e-mail the kids very frequently. I try not to badger the parents too much, but I'll go back to them multiple times if necessary.

Edna: We DO limit the number of books anyone can have to three at a time, and if they have a very overdue book (more than four weeks) we freeze their accounts so they can't borrow more.

Sharon: Me neither! We don't even have fines, so that's a method of leverage that I can't use.

Allison: The only penalty is having to pay for a lost book. There are no late fees. (Like many libraries, we find they're more trouble to administer than they're worth and may actually discourage late returns.)

Margaret: Oh, I've heard so many not-my-fault stories it's ridiculous!

Red: I just don't get that level of disorganization. I guess I was a relatively organized kid.

Jenny-O: I do send frequent, if not daily, e-mails. I can see how people get busy, believe me! I'm sad that it made you give up on the library, though.

Now I feel really inadequate! I don't even have my marigold seeds in the ground or a pot yet, much less flowers!