No-Mow May, by Accident 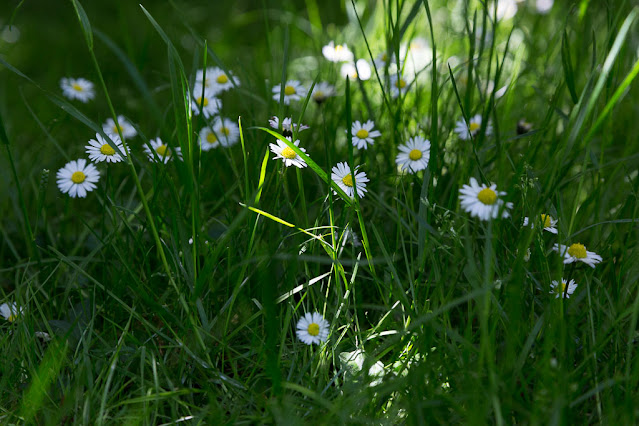 Remember how I said we weren't going to do "No-Mow May" this year? Well, I was wrong.

This wasn't by design so much as circumstance -- I just haven't gotten around to mowing -- but since we're already halfway through the month I plan to just let it happen. The daisies are thanking me!

I did, however, weed more of the flowerbeds yesterday, which seems perhaps antithetical to the no-mow philosophy. I simply cleared areas around some plants so we could see them better and they could get more light.

I also planted almost all the rest of my seeds, including zinnias, sunflowers and Nigella. I'm really not trying very hard with these seeds. I'm just sticking them in the ground and if they grow, so be it.

Speaking of which, I planted some a couple of weeks ago, and look at this: 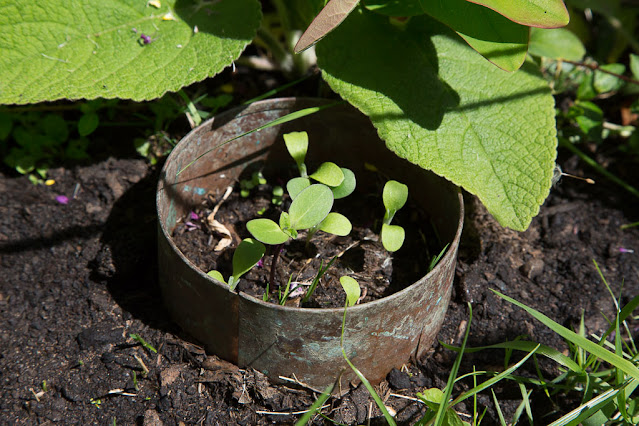 There are seven seedlings within that copper slug ring (meant, as the name suggests, to keep the slugs away). I have no idea how that happened. I normally don't plant seeds that closely. I'll have to thin them, which I hate doing -- especially since many of the others I planted in that first round either didn't come up or got eaten. 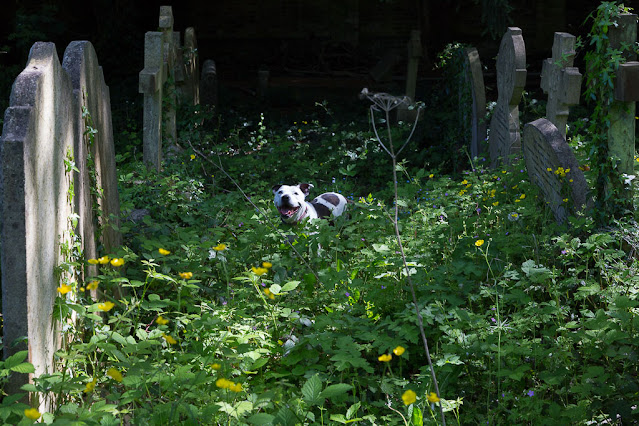 In the afternoon Olga and I went to the cemetery. I'd read that one of the graves there is for children's book illustrator Kate Greenaway, and I wanted to try to find her headstone. This involved wading into a brushy area where Olga declined to follow (above). I did find it, but it's covered in brambles at this time of year so I didn't get a very good picture.

I thought maybe it would be one of the stones mysteriously decorated with children's toys, but no. 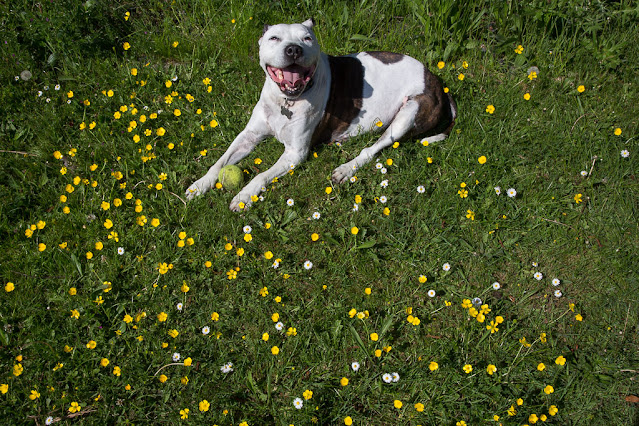 She's such a goofball.

The cemetery, by the way, does its own version of No-Mow May, clearing around headstones with a weed-whacker (known as a "strimmer" here) on a rotating basis, which allows grass and flowers to grow up and blossom in the intervening time. The rear section (where Greenaway's grave is located) is much wilder than the front section.
Posted by Steve Reed at 7:44 AM

I like graveyards that are allowed to grow wild, they seem friendlier than those trimmed to within an inch of the ground and everything so clean it looks brand new.

Those photos of Olga make my day.

Olga looks exhausted but still with a grin on her face.

It was unkind of you to refer to Kate Greenaway as a "goofball" though I know that Americans have a reputation for speaking their minds. By the way, I had no idea what a "goofball" actually was so I had to look it up - "a person who is silly in a way that is funny, often intentionally".

Olga is a natural comedian! She doesn't do stand-up, more like lie-down.

The wildness of that old cemetery area is really beautiful.

I like gardens on the wild side, much more joyful than the super-neat ones.

Still feeling a little sick-y but that smiling Olga does wonders!

Oh, Olga! Whatta smile! I grinned myself as soon as I saw the picture.

Olga looks so happy sitting among those sweet flowers!

I love your smiling dog!

Olga always looks so happy.
It is nice that they allow the cemeteries to get a bit wild. The ones here that don't allow any sort of gravestones or decoration because they are just flat grass-covered deserts are horrible.

Nice to see the flowers blooming at the cemetery. And Olga looks adorable smiling there.

Those photos of Olga are like therapy. They both make me feel so good! (and I think a lot of us need some "feel good" right now!)

Love the lush plants at the cemetery and Olga's smiling face.

I love that picture of Olga chin deep in the weeds and surrounded by those old headstones.

Is there anything better than a happy dog?

That photo of Olga made my day.

We do no mow spring. It lasts for months and gets really scraggly towards the end. Marc finally mowed a couple of weeks ago and I was surprised to see how much grass there is back there. It started dying years ago so I guess now it's starting to recover a bit.

That is such a cool cemetery. Nice that it's so close.

Forgotten graves are so sad -- and surprising when it's an author like Greenaway. Olga looks so happy! We don't have no mow May here but in my world it seems like no-mow-very-much May! I was getting pots ready for seeds today. It's a little hot and my planting table got filled with things it shouldn't have so we'll see how long I hang in there!

I like the idea of no mow May. I'd never heard of it.

River: I agree. They provide important havens for wildlife, especially in a city.

Mitchell: That last one makes me laugh!

Andrew: It was a longer walk than we've taken in a while.

YP: Upon rereading, I can see how it sounds that way!

Colette: It is beautiful there. I love all the nature.

Marty: Me too! I can't help but smile back.

Ellen D: She was very happy, if tired.

E: She is very smiley!

Ms. Moon: I love the old cemeteries here that are allowed to grow wild. It's not like many people are visiting the graves in the oldest sections, which are more than 100 years old.

Margaret: It's very lush there!

Sharon: She wanted to follow me but the brush was too thick!

Allison: And it's contagious!

Jim: Good! Mine too.

Ellen: We left a patch of lawn unmowed all summer last year, but when I finally did mow it it was pretty much dead underneath, so I don't think I want to do that again.

Jeanie: Actually, they don't seem sad to me at all. If the ultimate purpose of a cemetery is as a resting place, they seem like they're fulfilling that purpose. If I were to be buried (which I don't particularly want) I'd love it to be in a place that's basically overrun with wildlife.