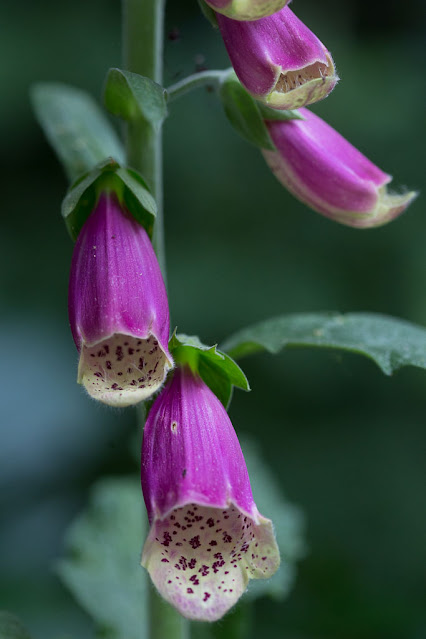 Our foxgloves have finally started to bloom -- the ones I started in seed trays, and potted on in the garden last summer (where maybe a quarter of them died), and planted out this spring. I always marvel at people whose foxgloves come up of their own accord, with no special effort or intervention. That just doesn't happen in our garden, and I have no idea why. There isn't a single foxglove here that I haven't grown deliberately, except one that sprouted in (and eventually took over) another plant's pot.

Blog reader Frances up in Harpenden says she has about 20 of them in her garden, the "children" (or maybe "grandchildren"?) of six seedlings I took her a couple of years ago. My boss also has some that sprouted from my seedlings. So I'm glad I'm spreading the foxglove love! 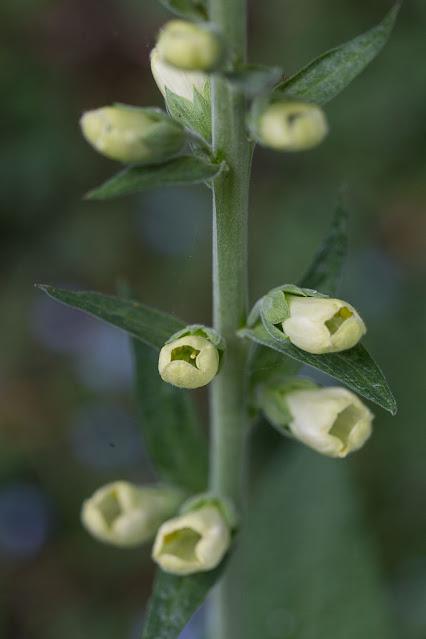 Some of the flowers are still just barely open. Another week or so and they'll be looking more relaxed, I think. This one seems to be white or maybe yellow, rather than the standard purple. (All of these are descended from seeds I got from a packet via "Gardener's World" magazine a couple of years ago.)

There's always a sense of satisfaction that comes from seeing a long project through to completion. I don't think I'm going to mess with foxglove seeds anymore, though. They're just too tiny and troublesome. If they don't re-seed on their own in the garden then this is the end of the line.

You know what else didn't re-seed? The Aaron's rod (or great mullein) that spontaneously appeared in the garden last year. Funny how some things come and then vanish again. 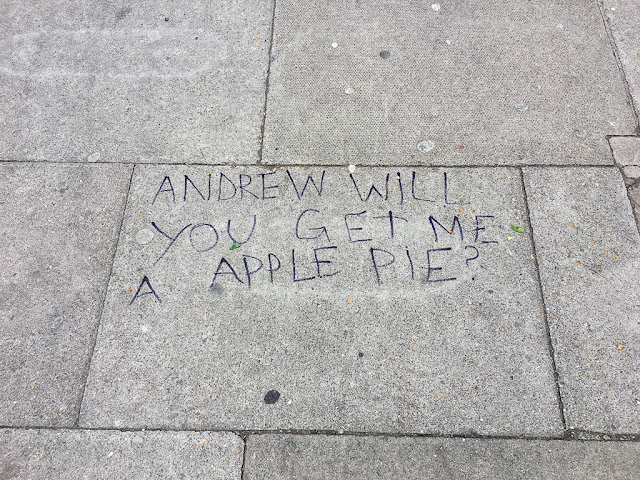 I had to go to the Royal Free Hospital yesterday morning for a quick blood test -- nothing major, and I was in and out. It's a good thing the NHS texted  to remind me earlier in the morning or I would have completely forgotten. I then walked to work via Belsize Park, which took more time than I thought it would, but it felt good to get out and walk.

On the way home from work in the afternoon I came across the message above scrawled on the sidewalk outside McDonald's on Finchley Road. I'm guessing someone was due to meet Andrew, but then had to step away briefly and left his/her food order behind?

I also got the mighty stamp project finished last night, so now we have our dining room table back!
Posted by Steve Reed at 6:16 AM

Those Foxgloves are stunning and that note on the sidewalk made me Smile. So much isn't worth Smiling over lately that I'm enjoying those Simple things that do bring forth one.

I didn’t know you had commandeered the dining room table for so long. Dave must be a saint. There’s enough room left on that sidewalk note for you to add the missing ”N.” The foxgloves are beauties.

I was also going to comment on the missing "N" ! The lack of it is quite disturbing!

I echo Frances's feeling of disturbance over the missing "N". It is almost as disturbing as hearing about people who eat on their knees when they have a perfectly serviceable dining table in the next room.

I think great mullein may be one of those biannual plants. You may see it next year.

This Andrew would reply, "Get your own (expletive deleted) apple pie".

The link to Aaron's Rod proved to be disappointing.

I assume your blood test at the Royal Free Hospital was free.

Agree with Boyd...not only biennial but might need specific weather conditions to germinate...
A pity as Mullein is a lovely and impressive plant.
We have seen it often growing wild in areas of NZ where they have had wool dyeing industry many years ago

Just catching up. Your azalea is beautiful, despite the rumpled flowers:)

It bothers me that the note on the sidewalk was incorrect, it should have ben an apple pie. What does that say about me?

I'm with Mitchell. I might have stopped to correct the Apple Pie order on the sidewalk!

I love foxgloves! I know I say this about 90% of your flowers, but I really need to try to grow some here.

I love the apple pie message. I could eat one right now as second breakfast!

Of course all of us immediately saw the lack of an "n" in that sentence on the sidewalk but I think it probably bothers some people more than others. There are ways of saying that sentence do not seem to require an n, others that do. Is this an American southern thing?
Are my ears permanently ruined as to grammatical perfection?
Oh, who cares? Someone wants an apple pie. The message was clear that Andrew should buy it.
Your foxgloves are a glory.

The top photo is beautiful. I love the inside of those flowers!

Steve, you certainly are a determined man when it is comes to projects! You work hard until it is completed to your satisfaction. I envy that as I am not as good at that as you are! Lovely foxgloves!

I'm surprised the foxglove doesn't reseed in your beautiful garden. You take such good care of things there. Our foxglove reseeds every year. Reading this post made me realize that I don't even think about our foxglove. They just do their thing.

I planted foxgloves one year but I bought small plants. they were really nice but of course didn't reseed.

Foxgloves are such pretty flowers. I stayed in a hotel in Belsize Park years ago. It was a nice hotel and a very pleasant place to stay while in London.
(I just looked up my list of foreign trips and that was in 1992. How on earth could that have been 30 years ago?)

It sounds like you have your garden organized so that you will have blooms most of the summer.

In Issaquah, WA, USA foxgloves grow wild. The ones that are in full sun are taller than the ones in the shade. I never saw a white one, always purple. They are a beautiful plant. Until reading your blog, I never knew what they were called.

I don't think I would have the patience for the foxglove seeds. Great results, though!

Bohemian: You gotta look for the bright spots wherever and whenever you can, right?

Mitchell: I noticed the N too! Dave doesn't care about the table. We never eat there.

Frances: It IS a nagging annoyance, isn't it?

YP: But the TV is in the living room! What would we do during dinner if not watch TV? TALK to each other?!

Boud: That could be. There are probably seeds lingering in the soil that just wait for the right opportunity to sprout.

Andrew: It was indeed free! I guess that name must date back to a time before the NHS when many hospitals were not free.

GZ: It is quite impressive and it was such a pleasure to have it appear spontaneously last year!

Pixie: It says you have good instincts as a copy editor!

Bob: I didn't have a Sharpie handy!

Bug: I would think foxgloves would do well there, but maybe it gets too hot? Do other people have them in your area?

Ms Moon: It IS funny how some people notice it and some don't (or don't mind).

Kelly: I do too. They're one of my favorite flowers.

Ellen D: Well, as I said, it's nice to have it done, but I think I may not try it again!

Robin: I hear that from so many people and I honestly have no idea why ours don't re-seed. I don't think our soil is great. We've never improved it and it has a lot of clay in it. But foxgloves are native so they should LOVE it!

Ellen: I think that's what I'm going to do from now on. These seeds are just too exhausting to deal with.

Sharon: Was it the Britannia? That's now being used to house homeless people and refugees!

Red: Yes! We should!

Ed: You are not! I noticed it right away.

Allison: My understanding is that they're European plants, so I wonder if they've become naturalized in the Pacific Northwest. They do well in sun but they don't like to bake.

Wilma: They are the tiniest plant seeds I've ever seen!

Jenny-O: It IS funny. I'd love to know whether or not it worked.

Foxgloves are fabulous! And gotta love a sidewalk message! (Though I'm afraid I would have change "a" to "an" if I had a piece of chalk on me when I saw it!)