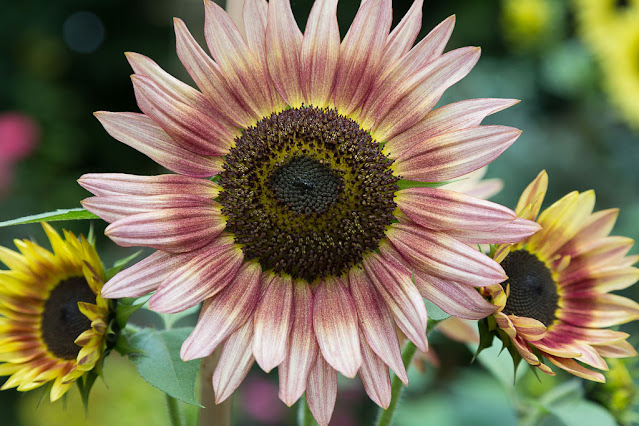 Our sunflowers are finally in full bloom -- a moment I wasn't sure would come. They seemed to get started so late this year. 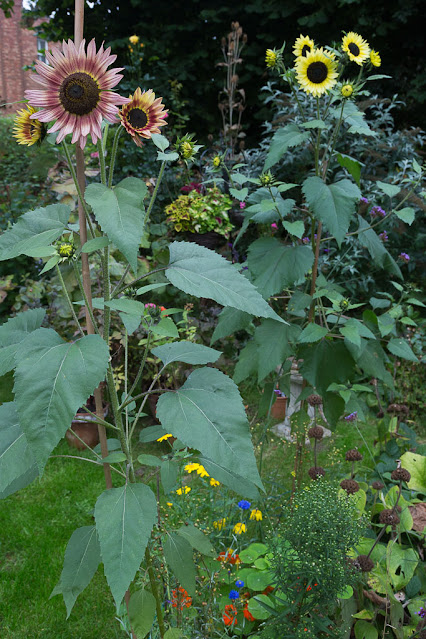 Dave said he looked out the window on Saturday and saw a squirrel AT THE TOP of the yellow one. I told him he should have snapped a picture, but he was focused on getting the critter off the plant. I noticed last week that some leaves were broken off and now there are petals missing from the big flower. Squirrels!

I spent part of yesterday working in the garden. I repotted a foxglove (also a squirrel casualty) and cut down another burdock. We only have one remaining now, in the wild area at the very back of the garden, and I'm planning to let that one stay into the winter and perhaps go to seed. 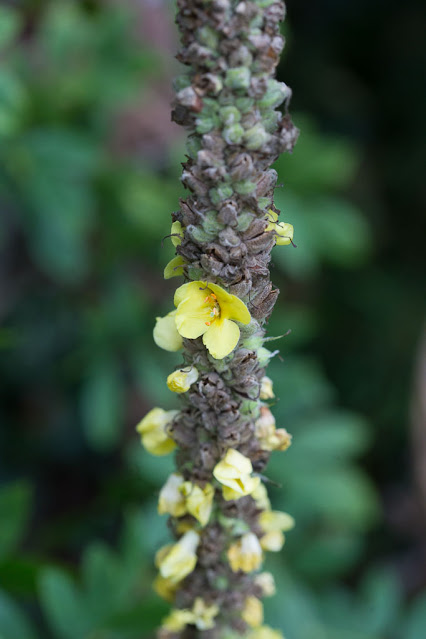 The other day Tasker Dunham asked about our "Aaron's rod," also known as great mullein. It's still blooming, as you can see, though quite a few of the flowers have gone to seed. I'm just letting it stay put for now, but when the rest of the blossoms die maybe I'll shake out the seeds and try to spread them around. 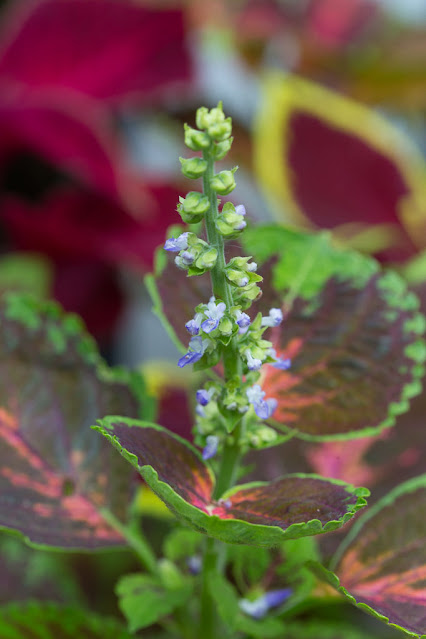 Our coleus is blooming, and I love the tiny purple flowers against the colorful foliage. I'm so pleased with how well these plants turned out. They're all bushy and healthy and bright. I'll buy more next year. 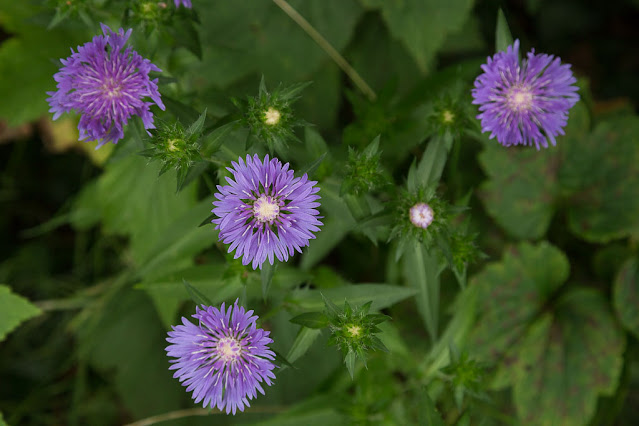 And finally, here's another shot of our Stokesia, which has a healthy cluster of blossoms -- pretty miraculous since it didn't bloom at all last year.

In addition to working in the garden, I cleaned the house and continued reading "Johnny Tremain," which I've almost finished. I finally tossed our living room roses, which had almost entirely lost their petals.

By the way, I learned something linguistically interesting as a result of that post -- I called the vessel containing the roses a "pitcher," and John from Wales questioned my use of that word, saying pitchers were "large jugs." I would consider almost any vessel with a handle and crimped spout for pouring a pitcher, regardless of its size.

Well, I looked into it, and apparently this is another British English vs. American English thing. In Britain, such a vessel is a "jug," at least according to Wikipedia. In fact, Wikipedia says that in British English, "the only use of 'pitcher' is when beer is sold by the pitcher in bars and restaurants, following the American style." Can that be true? Meanwhile, I would consider a "jug" to be an enclosed container with a handle and a stopper or cap -- like the plastic jugs in which milk is sold, or an old-fashioned jug of whiskey.

It's funny how English varies from place to place.

Dave and I got Chinese food on Friday night but I didn't eat my fortune cookie until yesterday. Did I miss my rendezvous with Lady Luck as a result?!
Posted by Steve Reed at 7:04 AM