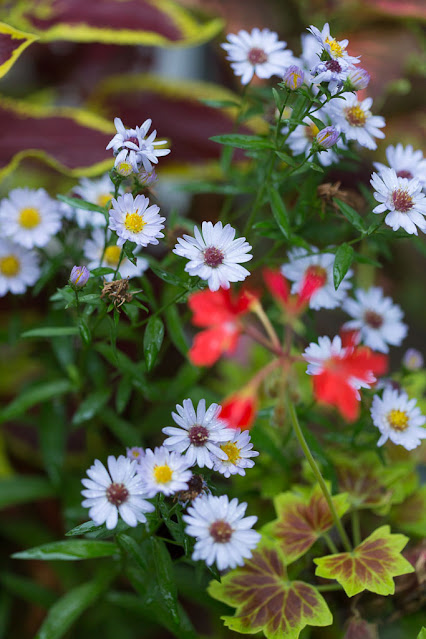 Today is Michaelmas, or the feast day of St. Michael and several other saints. I know this only because of the Michaelmas daisy, a light purple aster that blooms in profusion at this time of year. Here's one in our garden, growing wild between a variegated geranium and the coleus. I wouldn't even know about Michaelmas otherwise -- it's not a date that Presbyterians pay any attention to, at least in the United States -- but historically it's played a significant role in England as one of the quarter days that organized the yearly calendar.

For example, in the film version of E. M. Forster's book "Maurice," the scenes at Cambridge University begin in "Michaelmas Term" in 1909. How's that for a bit of trivia? I remember that only because when I saw the film way back in the '80s I had no idea what Michaelmas was, but it sounded very romantic and fit in well with the sepia-toned, romantic nature of that movie.

It's life as usual around here. We've had a lot of rain over the past day or so -- in fact I got caught in it walking home yesterday, and didn't have my umbrella. I was pretty soaked by the time I got to our front door! Oh well -- it's only water, and at least it happened on the way home and not on the way TO work, when I needed to look more or less presentable.

I think I've mentioned before that I occasionally read an extremely right-wing news website just to keep an eye on what those folks are thinking. The heavily propagandized "news" stories are mildly interesting, if you can overlook the bad writing, but the reader comments are really fascinating. (Just be prepared for heavy doses of racism, anti-Semitism and paranoia.) I don't want to link to the site or mention its name because I don't want to give them publicity and I certainly don't want them or their legions of trolls knowing I read them.

But anyway, I say all that only to introduce this hilarious screen grab, which I took from the comments section a few days ago:

I'm guessing "Cybil Tupperware" was supposed to read "Civil War." Someone should do a right-wing drag queen named Cybil Tupperware. She could drape herself in Don't-Tread-On-Me flags and MAGA accessories.

I had a very peculiar dream last night. I was supposed to go to a Melissa Etheridge concert in Tottenham (of all places) with Dave, my stepmother and my friend Cherie. They went ahead without me and I was supposed to meet them, but I was in a mall and I kept doing things there, and finally I'd frittered away so much time that the mall was closing. As I was about to depart, Dave came up the escalator and told me the concert was already over. I looked at the clock and it was 11:45 p.m.

I have no idea what any of that means, if anything. I don't even particularly like Melissa Etheridge.
Posted by Steve Reed at 6:56 AM