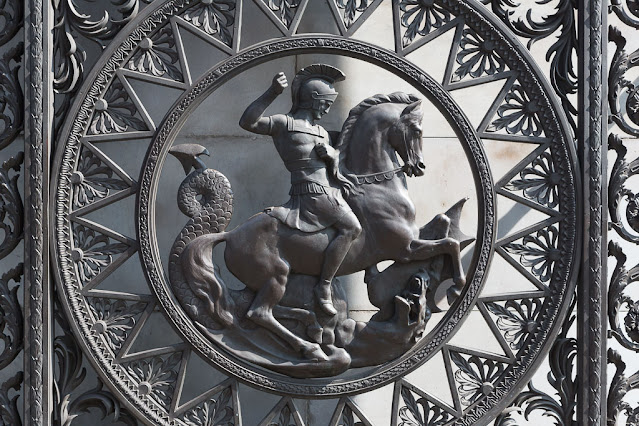 Just a quick post today, because I slept late and I have to get out the door and get to work. (One good thing about Olga getting older -- she often no longer wants to go on a walk in the morning, which saves me a good half an hour. She's still in bed as I write this.*)

This picture shows a detail of the metal gates at Marble Arch, where I went to see the Mound over the weekend. The gates are a permanent part of the arch itself. I believe that's St. George -- the patron saint of England -- killing his dragon, although his spear appears to be missing. That was perfect light for a photo, wasn't it?

The flag of England depicts the red-and-white St. George's cross.

By the way, Wikipedia has an interesting page about the legend of St. George and the dragon. I had no idea both St. George himself and the dragon story had origins in the Middle East. I always thought St. George was a knight in the crusades, but it turns out he pre-dates that period. He's mostly legend at this point.

*Addendum, 9 a.m.: As it turns out, the minute I posted and stood up, Olga leaped up too and wanted a walk. And of course she got one, because she's Olga and she runs my life. It turned into a rather rushed morning!
Posted by Steve Reed at 7:26 AM