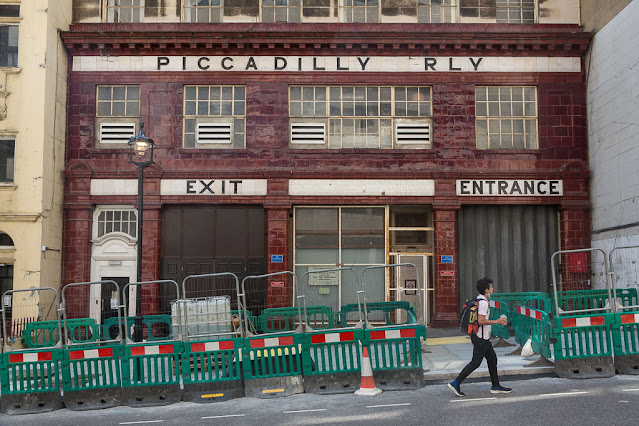 I think I've posted photos of the old Aldwych tube station off the Strand in the past, but I don't ever remember seeing this side entrance, which I discovered on a recent wander through that area. It's immediately recognizable as an old tube station, not just because of the signage but because of the maroon glazed brick. It was never very heavily used and it closed in 1994; there's a Wikipedia page that goes into more detail.

Work was pretty slow yesterday, so I was able to finish yet another Newbery book -- a graphic novel called "New Kid" that won a couple of years ago and didn't take long to read. It was really good! The kids love graphic novels. I'd say they're some of our most heavily-used books.

Dave and I have been watching "American Horror Story" on Netflix. I'm not really a horror person and I have mixed feelings about this show, but it's compelling enough that I want to keep watching. (Plus it has an excellent cast, including Jessica Lange, Denis O'Hare and Frances Conroy.) We've also started "Big Love," which I've been hearing about for years but never watched before. Entertaining, and again with an excellent cast (Bill Paxton, Chloe Sevigny, Jeanne Tripplehorn) but also weirdly beige and depressing.

I did manage to talk my way out of going to that concert this week. I told my friend Colin, who has the tickets, that I just don't want to expose myself to so many people in an enclosed environment and he was very understanding. He said his neighbor is going to go, so I'm off the hook for the ticket, too. Whew!
Posted by Steve Reed at 7:03 AM

Have you seen the TV series on railway architecture fronted by a very enthusiastic man called Tim?
The architecture and skilled work in those buildings is worth seeing

Great photo. I wonder what the old station looks like inside now. I would love to watch American Horror Story. We began the first episode when it was new; SG couldn’t take it. I may have to watch it on my own. We had Big Love for Big Love. A fascinating (and twisted) story.

"New Kid"? It's nice to be paid to sit at your desk reading books - though of course it's justifiable for librarians to garner better knowledge of their stock in order to engage in a more informed manner with library users.

It’s hard to turn down a treat, but in today’s new germs world you’re wise to resist temptation.

When I was a child my relatives lived in the East End. We used to go by the Aldwych station (was still open then) on the #15 bus from Poplar towards Trafalgar Square. But then I also remember going to the old Lyons Tea House on the corner of the Strand near Charing Cross Station.

I am a huge AHS fan,, and have loved every season; well, liked some and loved others. And the cast in the series is fantastic,

Bob, you may want to check out Brand New Cherry Flavor on Netflix... same sort of vibe as AHS. Catherine Keener is a joy to watch in it.

I've only seen through season 5 of AHS. Favorite was Coven. Best was Asylum (but so disturbing, I'll never rewatch it).

A rather famous station that is no longer a station.

Your caution about mixing it with many people is wise.

I don't blame you for canceling on the concert. I was REALLY glad that our annual employee banquet was postponed for spring (it was supposed to be next week - lasagna with a side of Delta!).

I think you were wise to cancel.

May Colin and his neighbor continue to be well. What is that station used as now>>or is it simply empty??

I'm glad to hear that you will not be going to the concert. I don't think it's a safe place to be nowadays. You have a super day, hugs, Edna B.

I'm glad you cancelled on that concert. Staying safe is the best.

I would have declined too. especially since my vaccinated neighbor got a breakthrough case of covid. just not worth the chance. though vaccinated I have no desire for even a mild case.

so the closed tube station, does it sit empty or did it get repurposed?

I think I would have passed on the concert too. That is a much different event than a Broadway play where everyone sits still with their mouths closed (and masked).
I've seen many tube stations with that red brick front like that.

I would definitely have passed on the concert too. I did eat outside at a restaurant yesterday. It's hard to know where the risks are these days.

There's a whole spectrum of risk with Covid and I think the kind of concert you described is at the high risk end. I would have cancelled, too. Of course, I wouldn't have been interested in going in the first place, so that's easy for me to say. I know my son is really missing being able to attend concerts (although he's avoiding them anyhow). I ate takeout food two weeks ago for the first time since early 2020. That's probably being TOO risk-averse :)

I think I've only read one graphic novel... a Manga called "Attack on Titan". It was based on an anime series we watched for awhile.

I need to look for a list of all the Newbery winners so I can see how many (if any) of them I've read.

I have discovered "Rake", an Australian series about a brilliant but flawed Sydney attorney. It has sex, drugs and . . . a trial in each episode. I'm enjoying it.