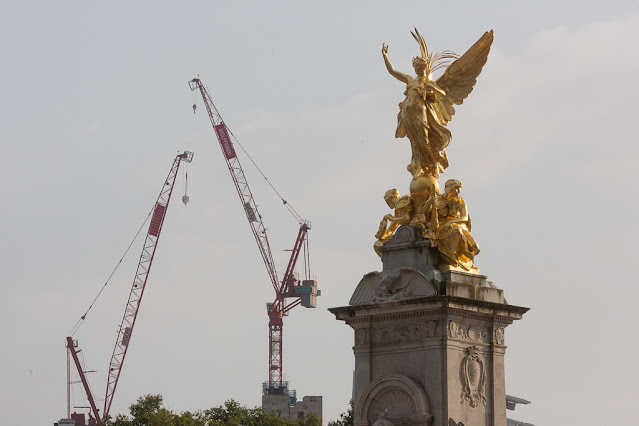 As I begin this post, I'm thinking about the fact that one of the most horrific days in all our lives was exactly 20 years ago. It certainly changed many things about our world -- our methods of air travel, the powers of surveillance granted to our governments, our own feelings of personal and national vulnerability and uncertainty. I was living in New York City on 9/11, and I've blogged about it several times, mainly here, here and here.

I spent ten years in New York, from July 2000 to October 2010. I think of those 14 months before Sept. 11 as a sort of halcyon period of sunny days and carefree existence, which I'm sure isn't entirely accurate, but such is the fog of memory. I remember walking in Greenwich Village and seeing the twin towers rising up beyond the southern end of Sixth Avenue, a vision that never ceased to thrill me. I was 34, and I felt young. The world held promise.

After Sept. 11, everything got almost immediately scary. Adding to the immeasurable trauma of that day, we had another major plane crash (unrelated to terrorism, as it turned out) a few months later in Queens. We had powdered anthrax come in the mail to my office building, and as a result, the company began sterilizing all the mail -- for the next few years it came to us warped and stained from high-temperature treatment that destroyed photographic slides and computer discs. There was a lot of fear, a dark psychological weight. It was a very, very bizarre time. 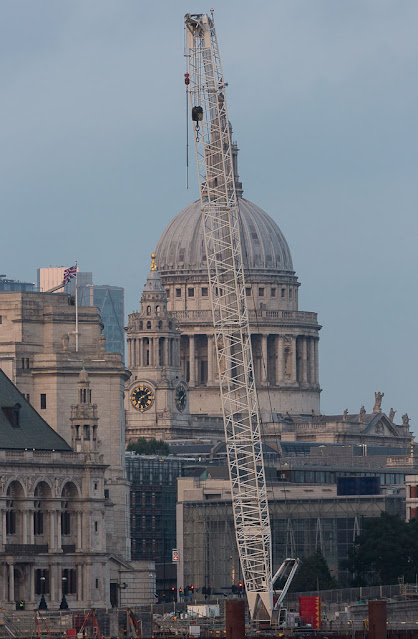 It was strange working in journalism then. Our days were consumed by 9/11 and terrorism-related news, while of course the world went on and there were plenty of other issues that demanded attention too. I worked at the New York Times Company as an editor for its smaller community papers, and though I wasn't involved in the Times's own coverage of 9/11, it was going on all around me and it was all any of us talked about. I remember being terrified that I would be asked to go to Ground Zero and report. I didn't want any part of it, and fortunately that assignment never came my way.

Anyway, I don't know where I'm going with this. I honestly didn't mean to write much about Sept. 11 today. I thought these photos might be a good antidote to stories of destruction, given that they show building. Construction cranes are omnipresent in London, and I noticed on my last two outings in the city that it was hard to take photos in some areas without getting cranes in the background (or foreground). I decided, rather than trying to avoid them, I should celebrate them. So here you go -- a celebration of cranes. 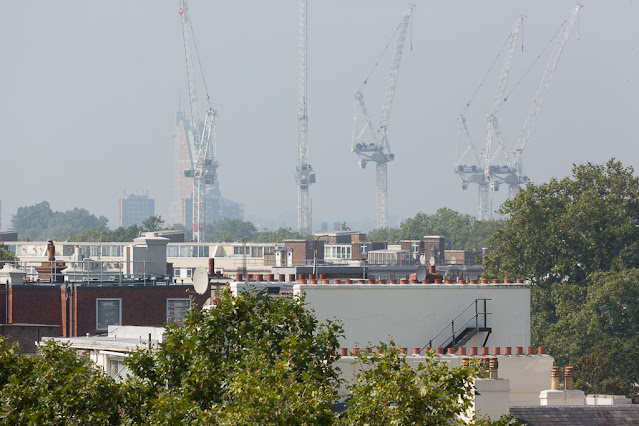 I have a rather low-key weekend planned. I'm taking a medical test meant to assess whether I have harmful, ulcer-causing bacteria in my gut (this is related to some intermittent stomach trouble). I have to follow a mild diet today and then tomorrow morning I have to spend a couple of hours periodically breathing into little tubes, which get immediately capped and sent to a lab for analysis. It sounds insane, but that's my plan, and I'll be glad when it's all over.
I'm also hoping to get some reading done. Funny story: A kid came to me in late spring asking for a book recommendation. He wanted to read fantasy. I showed him the Wheel of Time series, which has been popular with other students in the past, and he took the first book, which is about 650 pages long. He returned it this month, and yesterday, to my surprise, he gave me a letter asking me all sorts of questions about my opinions of the structure and the plot. It was then that I realized a) this was part of an English assignment, and b) we were supposed to have some kind of dialogue about the book, and c) he was under the impression that I had actually read it. Which I have not.

Had I known he wanted me to recommend something I'd read, I would have chosen Ray Bradbury, which I know well. Now I've got to do a quick assessment of this other gigantic tome and write him some kind of response, so we can have a conversation about it. His assignment has expanded into an assignment for me too!
Posted by Steve Reed at 8:28 AM