A Pitcher of Roses 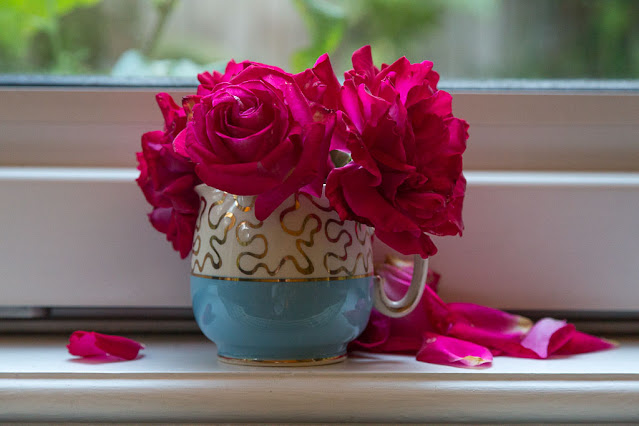 I brought these roses in from our garden after I accidentally broke them off a bush while throwing Olga's Kong. (Haphazardly, which is typical. I never had a good throwing arm.) They're starting to fall apart now, as you can see, but they're still fragrant. I should say all but one of them are from the garden -- the one in front I actually found on the high street, lying next to a bench. Who knows what the story was there.

The little milk pitcher I bought in Brick Lane right after we moved to London in 2011. Gosh, that seems like a long time ago!

Thank goodness this week is over. It's been weirdly draining. I can't really point to anything specific, except some organizational drama at work and exhausting current events like Trump's insistence that he won the election in Arizona despite evidence to the contrary. He won't be happy until he destroys our democratic system and turns the United States into his own personal plaything.

I feel very scattered. I think I need to just relax this weekend and stay off the computer and read and walk the dog and get my act together.