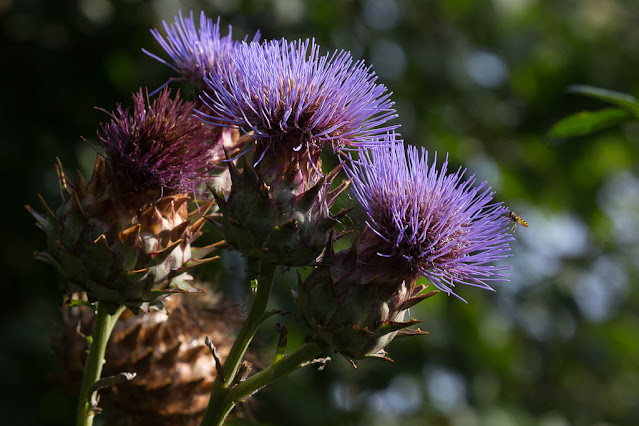 Remember how I said our cardoon didn't bloom well this year? I should have emphasized "yet" -- because now it's blooming like crazy. I think it has eight flowers. They're smaller than they've been in the past but the bees like them just as much.

I survived my medical test. It was without a doubt one of the strangest tests I've ever had to take. I was asked, after 12 hours of bland food and 12 hours of fasting, to exhale into a glass tube, which was rapidly capped and labeled with the time of my exhalation. I then had to drink a sugary solution once, and repeat the breath test nine more times, using nine more tubes, over more than two hours. Finally, I was asked to package those tubes containing my breath into a box and ship it back to a lab.

I find the idea of mailing my exhaled breath very weird.

However, I'm playing along. And I was so happy when it was all over and I could finally eat again. Dave bought waffles and we ate them with bacon and real maple syrup made by his nephew in Michigan. 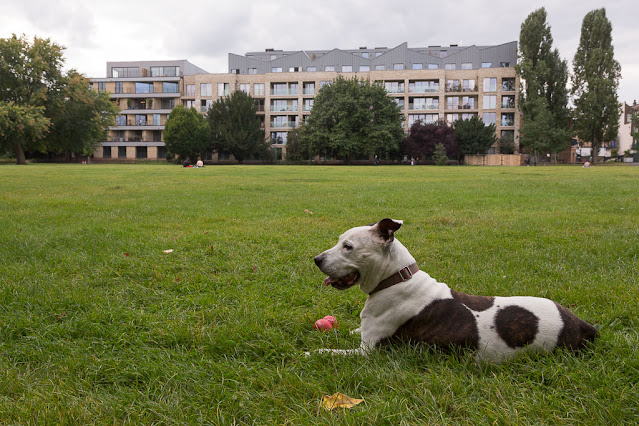 Afterwards I was feeling super-efficient (and relieved), so I decided to walk Olga and run some errands. I took a big bag containing our bedsheets and Dave's shirts for the laundromat/cleaners and also my medical test to drop in the post box. I dropped off the laundry with no problem, but the test, it turned out, was just a hair too big for the slot in the mailbox. Argh! I was outside the Post Office, which was closed, and I saw a woman knock on the door so I thought I might be able to drop it inside if someone answered -- and they did, another woman in a glamorous green dress. I asked her if I could drop my test indoors and she said they were having a "private party" -- so, no. The idea of a private party at the Post Office on Sunday afternoon sounded a bit bizarre, but then, we have quite a stylish Post Office.

Undaunted, Olga and I went on to Kilburn Grange Park, where she chased her Kong, lolled in the grass and even menaced (sort of) some squirrels. Remember when that building behind her was a construction site covered in scaffolding? 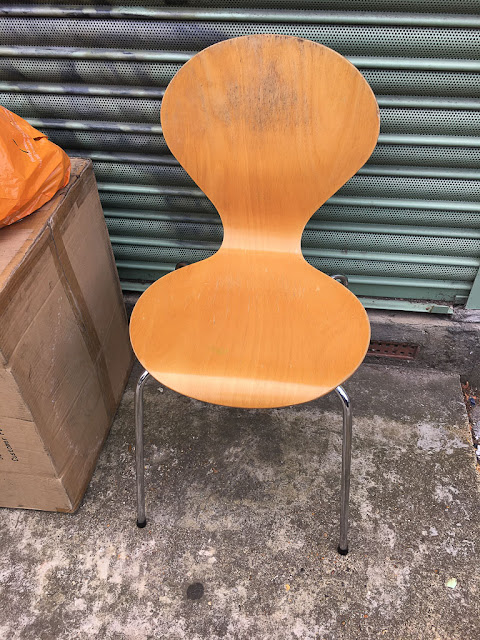 I saw this chair sitting outside a shuttered shop with some empty boxes and other debris. I asked the guy who ran the grocery next door if it was trash, and he assured me it was -- he said it had been there several days. So I texted Dave and asked if I should pick it up. The finish needs some work, but it's Danish and was probably quite expensive when new. We agreed that I should.
And that's how I wound up walking home with an exhausted, very slow-moving geriatric dog, carrying a box of my exhaled breath and a Danish modern chair. And then, about halfway home, aware of what a spectacle I must be, I realized that my fly was down and probably had been for hours. Life's little absurdities!

Oh, and I forgot to mention the man we saw while walking to the park, wearing a t-shirt that said, "It's Allergies Not the Rona," which I thought was pretty funny. I would have taken a picture but, as we've discussed, I had my hands full.
Posted by Steve Reed at 6:47 AM