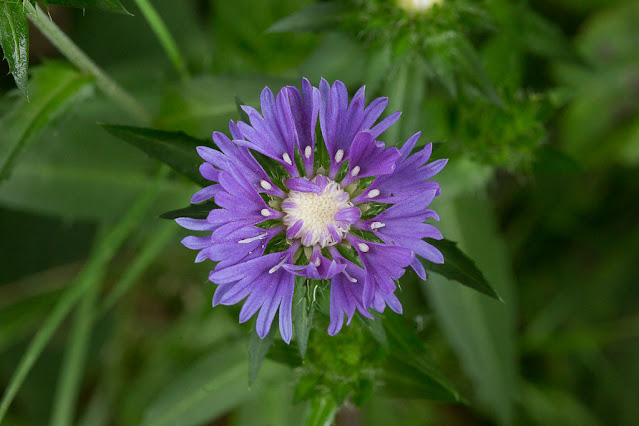 Our Stokesia is blooming, finally. We bought this plant a couple of years ago, and it had flowers that first year, and then Dave put it in the ground and last year it did nothing. We weren't even sure it was going to survive. I guess it just needed to become acclimated, though, because this year it has not only this flower but lots of buds.

The charger problem was solved to everyone's satisfaction yesterday. It was decided that the library would not resume lending computer chargers (yay!), that kids would be expected to bring their own and we would send people to the technology office in an emergency. I also have a charger beneath my desk that I will use to charge student computers in a pinch. So we have a few solutions but I won't have to struggle with managing all those loaner chargers as I did before.

I'm sure this whole issue sounds whiny to anyone outside the library, but trust me -- it was a nightmare. I'm thrilled to be done with it so I can focus on books.

I'm getting some long-overdue tasks done. I ordered some new pillows for our bed online from John Lewis and found to my surprise that I could arrange to have them delivered for pickup at our neighborhood Waitrose. (John Lewis and Waitrose are the same company, I think, so that makes sense.) Dave went and picked them up yesterday and I was so happy to throw out our old pillows -- which we've had for more than a decade -- and put those new ones on the bed. They're softer than our previous ones and there's a bit of polyester off-gassing going on, which hopefully will subside in a few days!

I also ordered some new shoes, because mine are really worn. Dave and I had inadvertently bought the same style of shoe and we could never keep straight whose was whose, so this time I made sure to order a different style. I suppose it doesn't matter if we wear each other's shoes but I'd rather have my own.

Finally, I cleaned out some of our potted plants. I tossed three non-performing pelargoniums, a dead cyclamen, a past-its-prime sunflower and our horseradish, which was looking ratty and never again prospered the way it did years ago. Sometimes you just have to move on.
Steve Reed · Foxes
The foxes in our garden were a nightmare last night. At least, I assume those are foxes -- I can't imagine what else they would be. I was awakened around 1 a.m. by all that noise and took my iPhone to an open window to record it. They made such a racket that I fully expected to find blood all over the patio this morning, but no. Nothing. Were they playing? Mating? Who knows.

Olga perked up her ears but did not get out of bed -- another sign that she is taking life much more easily these days. A few years back she would have been throwing her body against the back door to get out and mix it up with those critters.
Posted by Steve Reed at 7:02 AM