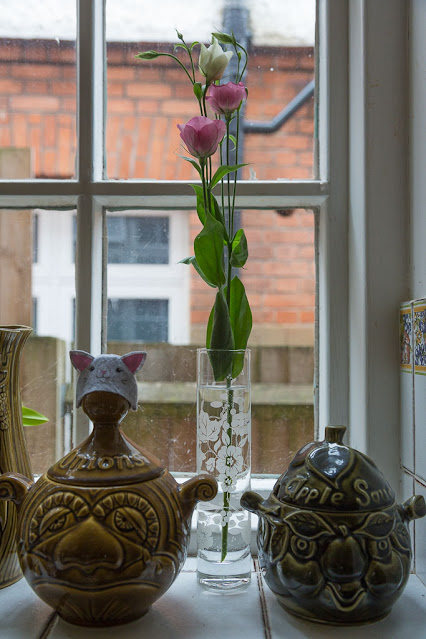 As I was walking home from work on Friday I found this flower lying in the street. I think it must have fallen out of someone's cut flower arrangement. Miraculously it hadn't been run over or trod upon, so I brought it home. I have no idea what it is -- the leaves look a bit like alstroemeria (Peruvian lily), which is a common cut flower, but the blossoms look more like poppies. My plant identifier app first tried to tell me it was a snapdragon (not) and then a China rose (also not). It's a mystery.

Yesterday was indeed a very restorative day. I spent the morning reading "Johnny Tremain," one of the better Newbery-winning novels. I remember reading it as a kid and loving it, and I'm happy to say it has withstood the test of time, at least for me.

I did nothing in the garden. I did no housework. In the afternoon I walked Olga to the cemetery, and she was downright energetic, chasing squirrels and her tennis ball. (In fact, she not only carried her own ball, she found more -- we left the house with one and came home with three, making up for some of the ones she's lost in the past! In fact, some of those found balls could conceivably have been hers.)

I talked to a woman at the cemetery who was there with her dog. She was enthusing over Olga and said she had a staffy that lived to be 16! That made me feel better about Olga, a comparatively youthful 11 or so.

I found this on the sidewalk on Finchley Road: 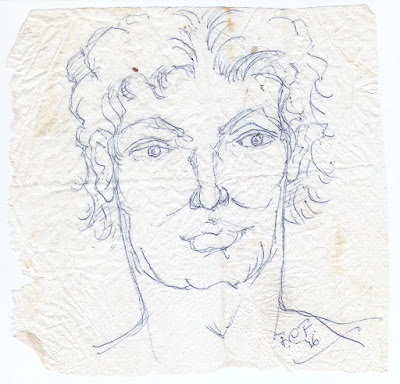 It's on a very delicate square of tissue paper. I'm surprised it was intact. What year is that by the signature -- 1996, or 2016? Anyway, it's kind of meh, but I couldn't resist picking it up.

Last night Dave and I watched an intriguing movie called "The Most Beautiful Boy in the World," a documentary about Björn Andrésen, who was plucked from obscurity as a teenager to play the role of Tadzio in Luchino Visconti's 1971 movie "A Death in Venice." The documentary examines how that experience transformed Andrésen's life, in many ways for the worse. He didn't really want fame and wasn't even chosen for his acting ability -- he was chosen purely for his physical beauty, after a rather creepy audition that required him to walk around the room and remove his shirt. (He was fifteen at the time.)

Andrésen now bears no resemblance to his earlier self -- with long gray hair and a full beard, he looks like Gandalf in "The Lord of the Rings," as one of the reviewers said. Talk about the ravages of time! Even by the end of the film he remains a bit of a cypher, and you can't help but contemplate the ways that physical attractiveness can transform a person's life.

Everyone, especially when they're young, wants to be attractive. But I've often thought that being physically average was a blessing in disguise. I wouldn't say I'm unattractive, but I've never been conventionally handsome, with my big teeth and premature baldness. As a result, people mostly left me alone -- I didn't have to fend off a lot of advances, and I didn't have people imposing their expectations or desires upon me. I got hit on just enough to make me feel appreciated. In the age of AIDS, being of average appearance may have even helped save my life. Who knows? At any rate, living as an object of others' desire is taxing, and the movie conveys that.