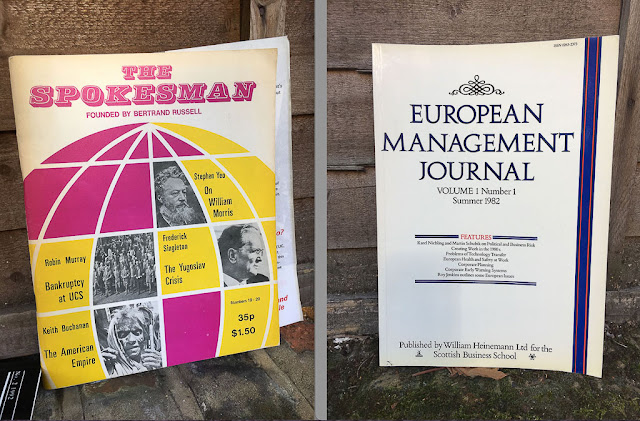 Today, just some photos of interesting stuff I've found in my urban wandering.

First, there's a wall on one of my walking routes to school where for months now, someone has been setting out stacks of old publications -- mostly art and political journals. Here are two I found yesterday. That issue of "The Spokesman" is from 1971, and the European Management Journal (which sounds as boring as all get-out) is from 1982. Someone must be cleaning out their closets and bookshelves. 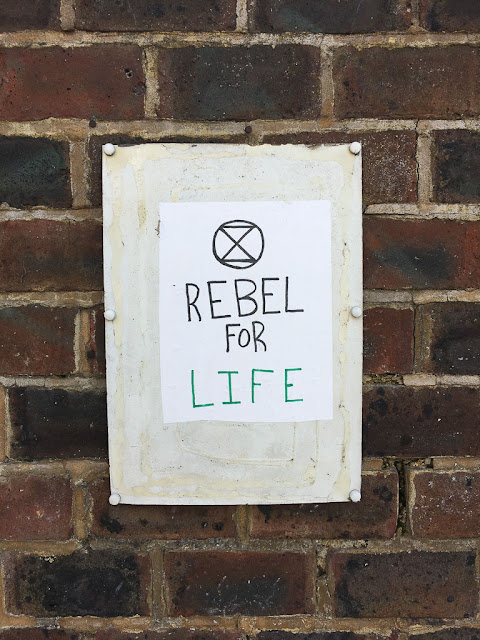 Here's a sign promoting Extinction Rebellion, the group whose march against climate change I posted yesterday. Some of you questioned the effectiveness of marching, and I'd agree that it has no practical effect, but I suppose it does raise awareness. Or that's the idea, anyway. (That was a very small march, incidentally -- some of their demonstrations are large and quite disruptive.) 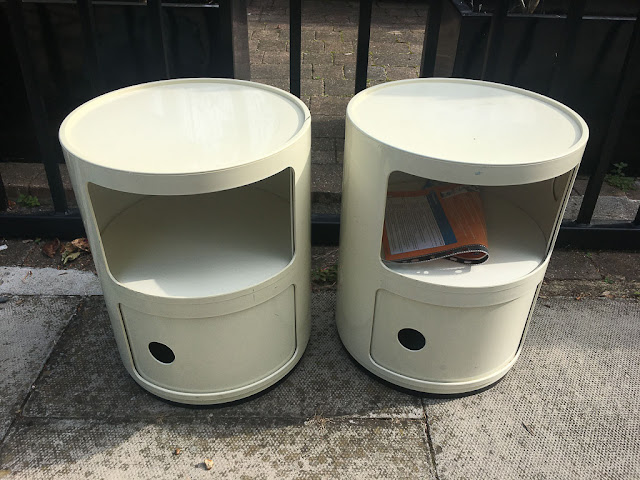 While walking Olga I found these bedside tables set out on the street. I think they're cool in a kind of Stanley Kubrick way, but I didn't take them. 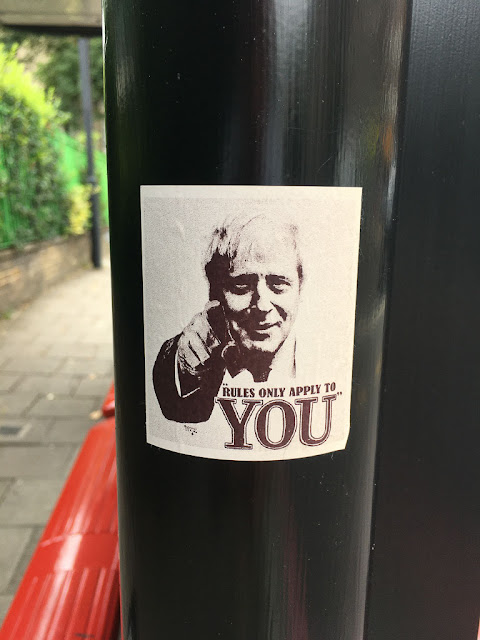 Boris Johnson's administration has been criticized for its "do-as-I-say-not-as-I-do" approach to governing. 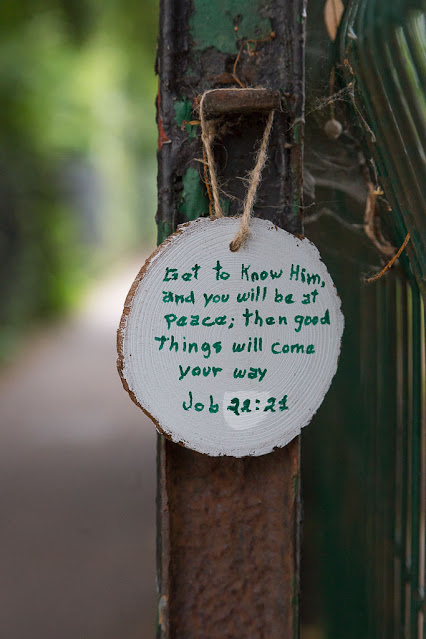 I found this Bible verse posted on a fence near the cemetery. I found a similar one on Hampstead Heath back in January. 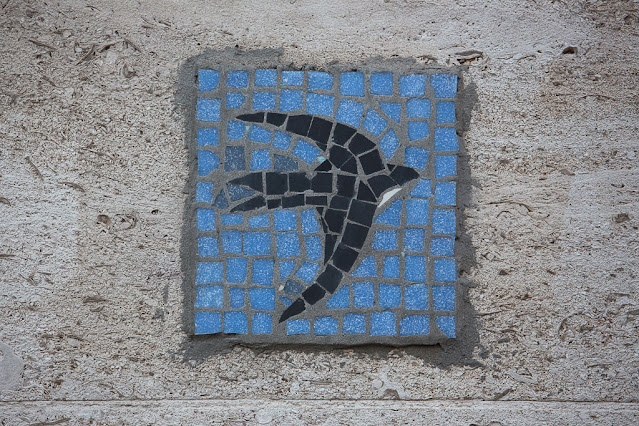 This tile mosaic of a swallow (or a swift?) was attached to a wall near Southbank Centre. 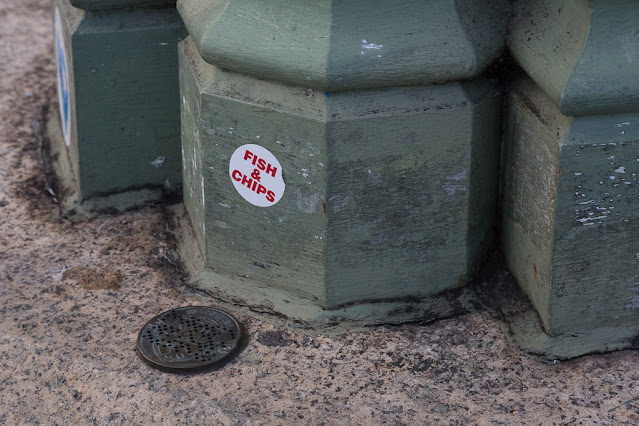 A random sticker found on Westminster Bridge -- probably a remnant of someone's take-away food order. The textured disk below the sticker is much more interesting -- a bronze medallion reading "solus ipse non" with the apparent acronym SURY, and punched with holes. Other identical medallions have been found elsewhere in the UK, and there are discussions on Reddit about what they could be. 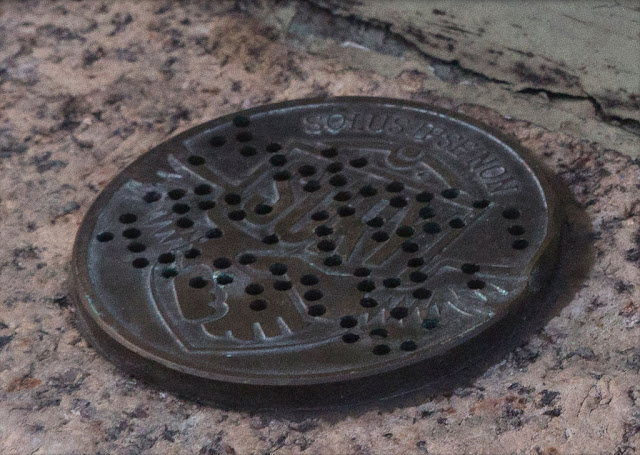 Here's a close-up. The shield appears to show shaking hands with wings. I'm not a Latin expert but according to the Reddit folks, "solus ipse non" roughly translates to "I am not alone," or "he is not alone." 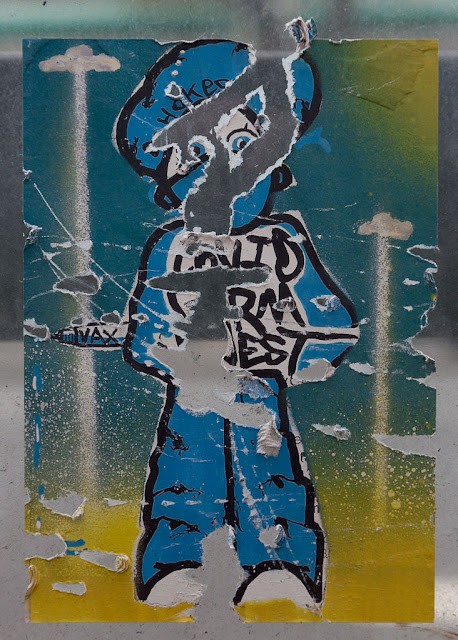 And finally, here's one of those Covid "Dr. Hokes" stickers which we've seen before. Someone clearly objected to this one!
Posted by Steve Reed at 7:10 AM

What's that about political marches being ineffective? Look back through social and political history and the truth is that protest has changed a lot of things. It seems to be the habit of the ruling class and comfortable citizenry to deride and diminish political protest - forever saying, "It won't change anything". They are wrong. I heartily applaud Extinction Rebellion for raising the bar with regard to the climate crisis. Should we just sit on our backsides, doing or saying nothing?

I’m not familiar with Dr. Hokes. Those bedside tables ARE interesting. Wouldn’t they make great plant stands in your garden? European Management Journal Volume 1 Number 1?!? That would complete my collection!!!

One older middle class person marching is symbolically worth ten rough heads who destroy public property. A small march, reported by you to me in Australia and I am interested.

With other appropriate furnishings those bedside tables would be a terrific find. Surely they would sell for a good bit on a market site.

What I mean by "no practical effect," and what I think my commenters were saying, is that a small group of people walking through the street doesn't appear to concretely change anything on its own. But it DOES call attention to the issue, and in that respect, yes, marches are worthwhile.

It’s a swallow
Swift’s are all black

If I brought home those tables Dave would kill me! LOL

I bet someone else claimed them! I'm sure they didn't go out with the rubbish.

I can never tell the difference! But thanks for that hint.

What interesting things you come across!

I am very intrigued by the medallion! It has very Dan Brown vibes to me :)

You spot the most interesting things. I especially like what I will call the Clockwork Orange Night Tables.

I've come to the conclusion that there are way more interesting things to see on your walks than there are on mine. Maybe I need to move.

An interesting array of street finds. Those "I am not alone" discs are fascinating.

You have sent me off on another google hunt but the story behind the medal remains a mystery! Fun and interesting photos!!

Some of the large pile of discarded books etc. are likely from cleaning out a residence where someone has died. Some people never get rid of anything. People cleaning out the house just throw things away.

was the medallion attached or just laying there. curious. I wonder what it's all about, especially with all those holes punched it it. the mosaic of the swallow is a sweet little touch. and 'do as I say, not as I do', believe it or not, that was our family motto growing up. I always found it to be a bit hypocritical, especially when I discovered all the uppers and downers in my mother's bedside table while they were lecturing us on the evils of drugs.

That's quite an interesting coin (or medallion). I wonder what all the holes mean.
As for the protest marches, I only agree with them as long as they are not disruptive or destructive. BTW, Tim Gunn produced and co-hosts the new program "Making The Cut" with Heidi Klum. The program is on Amazon, free to members. Enjoy your day, hugs, Edna B.

The medallion is interesting. What's that mean?

Trust me, it's a swift. It has scimitar-shaped wings and there is such a thing as a white-throated swift. So says me, Vivian Swift.

You find some of the neatest things on your walks! Those little tables feel very 60/70-ish to me. Roughly how tall were they?

I hope you'll share if you ever learn more about the medallions.

You're so attentive to the world. You see the treasures and quirks others often overlook.

You find so many neat things. Luckily, photos of them take up next to no room when you bring them home!

Well, Vivian, you should know! I'll do some bird research. :)

It's never dull here in the naked city.

It's weird, isn't it? There's definitely some kind of code going on with those punch holes.

Ha! Well, there's also something to be said for a less cluttered walking route! LOL

Aren't they? I'd love to know what the story is there.

I did my best to come up with a conclusive answer but all I found was speculation!

I wonder if they've died or are just downsizing. I can't imagine how cluttered their house must be if they've got magazines from 1971 lying around.

The medallion was very securely attached, as they seem to be in other locations as well (according to that Reddit thread). I think a lot of parents follow that "do as I say, not as I do" approach -- and it never works because kids learn more by watching how adults behave than by what they're told.

Thanks for the info on Tim and Heidi, together again! I'll have to check it out.

No idea, beyond what I've said above. It's a mystery!

They were maybe 2 feet tall? That's just a guess. They were quite lightweight but we just don't need them.

It's a way of "collecting" without actually acquiring the objects! (At least not too often.)

Exactly! Photos are the way to go!