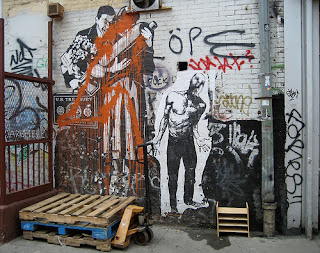 James asked me yesterday about the so-called Splasher. Here’s the story.

The Splasher - whether a person or group of people - has been destroying street art in New York. They hurl and splatter paint all over the piece and post a sort of collegiate, nonsensical manifesto next to it about the commercialization of art. This has been going on for several months now, with the attacks coming in waves.

The Splasher seems to target big, prominent pieces - like the work of Banksy, which they demolished, and Obey (Shepard Fairey), above.

Needless to say, this pisses people off.

Some have argued that by splattering street art the Splasher is creating his own artistic statement. But I don’t buy it. I’m not sure wanton destruction of someone else’s art can really be called art in itself. Was it art when that crazy guy threw acid on the Mona Lisa years ago?

Lately, the Splasher has been getting media attention - this article in yesterday’s New York Times and a recent piece in New York magazine. As the Times article explains, he may have just been caught. But that won’t stop copycat splashings and other mischief, so no one’s really sure what will happen from this point on.

Still, keep your fingers crossed that the Splasher’s splashing has come to a halt.
Posted by Steve Reed at 11:26 AM