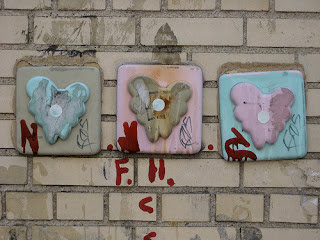 Yesterday’s post, and the discussion that followed, has me thinking about my own arbitrary classifications when it comes to graffiti and street art.

I generally put pieces I see on the street into one of three main categories. There are murals, which tend to be large, detailed paintings that are put up legally at the behest of a building owner. There’s street art, which is illegal and can be anything from pasted-up paper to small stickers to painted figures and stencils - always with some kind of pictorial or graphic element. Sometimes it's even sculptural, like the hearts above. And then there’s graffiti, which is basically everything else - tags, big bubbly “fills” and intricate, angular “burns,” scribbles of every kind.

The lines between these categories are blurry and they sometimes overlap. But that's how I think of things.

I tend to go for the illegal stuff - street art and graffiti. A mural is fine now and then, like the Os Gemeos mural I shot in Coney Island a few weeks ago (which you can see on my Flickr account). But I like the stuff that gets slapped up and may stay only a short time until someone else rips it down or covers it up.

(There’s a fascinating world of etiquette in graffiti, which is kind of funny when you think about it. Graffiti and street art people are very sensitive about their space and about “going over” each other - if you paste your work on top of someone else’s, it’s considered pretty rude and it invites retaliation.)

I generally focus my photos on street art. Occasionally I go for graffiti scribbles if they’re amusing, and tags if they’re graphically interesting. (So subjective!)

I’m generally not interested in big bubbly fills and burns, which I often have trouble reading.

So there you have it, a big pie that I have arbitrarily carved into sections just to organize my world and my collection of street art photos. Silly, isn’t it? Especially since Zen teaches us that all the divisions created by our mind aren't really real. Graffiti is all one thing, neither good nor bad - except in my own head.
Posted by Steve Reed at 11:54 AM