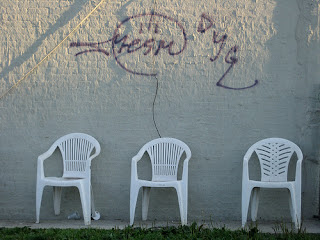 There's an art museum called P.S. 1 in Queens (yes, it used to be a public school) that's affiliated with the Museum of Modern Art. Every Saturday afternoon and evening during the summer they hold a sort of party in the courtyard, with a DJ and dancing and beer, and lots of people lounging around in hammocks. I went yesterday with several of my friends from Queens, and we had a ball.

We were really impressed with the diversity of the crowd. A very wide age range - mostly 20- and 30-somethings, but also many people older than that. All races. Gay and straight. It was pretty impressive to see a single event that drew so many different people, all mixing it up on the dance floor.

And what a great idea to really animate an art museum, and overcome its essentially formal atmosphere!