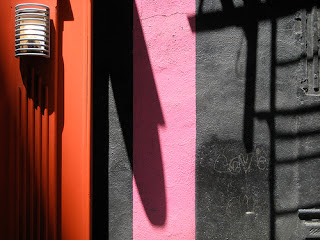 Yesterday’s entry got me thinking about the human need to classify the world around us. After all, I don’t just classify and categorize street art. I classify everything, in one form or another, as do most of us.

I think I picked this up as a kid, when I collected rocks and shells and leaves and stamps, and learned how to sort and determine which items belonged to which larger group. Was the rock igneous or sedimentary? Was the stamp from France or a French colony?

Yet classifying is fraught with problems, particularly in the natural world, where nature doesn’t always conform to our neat specifications. It’s one thing to classify a stamp, but something else to classify a snail. Particularly when it looks a lot like a neighboring snail that we determine, for some reason, to be a slightly different species.

Perhaps this is why Zen frowns on dividing things up artificially. Because the lines don’t really hold and the barriers aren’t real. Establishing barriers is the first step toward determining what we like and what we don't, and what's good and what's bad, and in extreme cases, what we allow to live and what we kill.

The snails are themselves and each other, and even more so, they are us and we are them.
Posted by Steve Reed at 11:52 AM