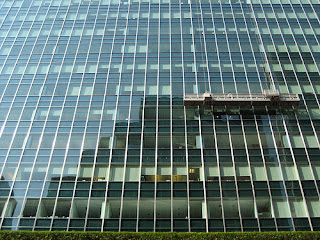 I went to the dentist on Tuesday for my regular semi-annual cleaning. (As the old commercial said, "Look ma, no cavities!") Afterwards, I walked from my dentist's office, at 54th Street and Park Avenue, across town and down to my office at Eighth Avenue and 40th Street.

It was a nice morning for a walk, and it seemed to be the day for window washing. I passed several crews out on the sides of buildings, cleaning the glass from suspended platforms. 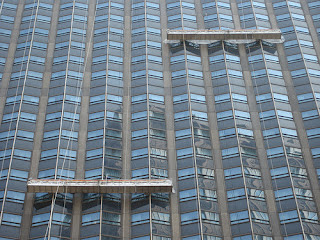 This is not a job I would want. I normally enjoy cleaning anything, but having to do it from such a precariously suspended structure would just freak me out. I'm not great with heights, despite living in the tallest city in the world. As long as there's a barrier between me and, well, falling, I'm fine. But I'm not sure I'd feel very secure in one of those contraptions.

I remember reading about a Buddhist monk who had such a finely honed ability to remain in the moment that once, when he was traveling on an airplane and an engine caught fire, he merely watched it burn from his seat, enjoying the colors of the flames.

To be a window-washer is to employ a similar skill: To set aside the fear of what could happen, and instead be present to what is happening. Why be afraid that the plane will crash, when ultimately it won't? Why be afraid that you're in danger of falling, when as long as you're careful, you're not?

Still, even as I understand the futility of that fear, I'd be afraid on an airplane with a burning engine - just as I'd be nervous on one of those platforms!
Posted by Steve Reed at 10:53 AM