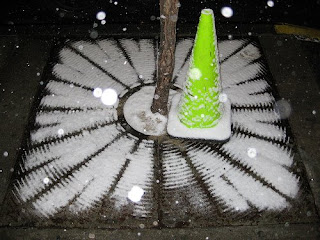 I zipped over to New Jersey in the morning to help my friend David assemble a new desk he got at Ikea. It was an adventure, with a million little screws and anchors of all different sizes, but fortunately the directions were very clear (and entirely pictorial) and we figured it out in a couple of hours. No drawers, thank God.

Then I went straight across Manhattan and out to Brooklyn to meet up with my friend Kate, who wanted to do some walking. We wandered through Williamsburg and Greenpoint -- an entirely different direction from where Katherine and I walked Saturday. We found some neat street art while walking along the East River, and though we were only out for an hour or two, I was chilled to the bone by the time we got to her apartment. The weather was changing, turning blustery and gray.

Kate, her partner Moom and I had dinner, and Katherine (from Saturday) joined us later. Greenpoint is a very Polish neighborhood, so we’d planned to have a Polish feast with mushroom and cheese pierogis and different Polish beers. At the last minute we had a menu change, though, and went with gnocchi and Polish beer. If I were a chef I’d call it “Italian-Polish fusion cuisine” -- and Moom, who did most of the cooking, is Vietnamese-American, so there was a bit of that sensibility thrown in as well. (Coconut ice cream for dessert, for example.)

While we ate it began to snow, and by the time I walked to the bus stop the streets and cars all had a light dusting. A few days ago it was warm and bright enough to seem like spring, but for the time being at least, we’re back to winter.