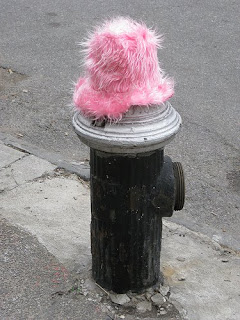 I’m kind of fuzzy-headed this morning, just like this fire hydrant! I went to a fundraising reception and dinner last night for the National Lesbian and Gay Journalists Association, or NLGJA (which we fondly pronounce “negligee”). I had about six glasses of wine over the course of the evening -- hence the fuzziness!

So here’s my history with NLGJA: I first heard about the group in 1996, when I was a reporter in Florida, and I went to the annual convention in Miami. It was such an incredible experience to be there with hundreds of other gay journalists, all talking shop. (Gay men and newspapers -- two of my favorite things!) The conventions are typically a combination of journalism education, panel discussions about gay issues in the workplace and in coverage, and DRINKING. I joined immediately and went to many more conventions in the coming years: Chicago, Philadelphia, Dallas, New York, Atlanta.

After I moved to New York in 2000 I became a vice president of the New York chapter, a post I held for several years. During that time I also served as the informal leader of the loosely organized gay employees’ group at the company where I work.

I’m not much of an activist, so all this was quite a departure for me. I do think it was important work -- NLGJA encouraged many media companies to offer domestic partner benefits (for those lucky enough to have a domestic partner!) and still raises questions about coverage that's unfair or inept.

But eventually, activism-fatigue set in. I stepped down from my chapter post a couple of years ago, and when my company formed a formal GLBT “diversity group,” I helped transition our existing network to that new format. And then I got the heck out of the way.

All of which is a long way of saying that it was great to go last night and catch up with old friends, and make a few new ones. (At dinner I sat next to this woman, who works for PBS television and was very charming. She teased me for not knowing anything about "American Idol.")

I haven’t been to a convention in a couple of years, but I plan to go this summer -- it’s being held in Montreal, where I’ve never been. (Assuming I’m still employed, which is a big assumption, given the state of the newspaper industry!)