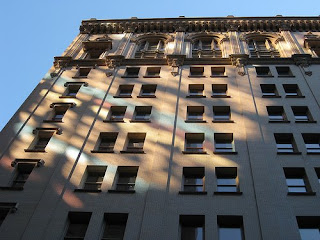 I was psyched when I went to my local grocery store last week and found kumquats for sale. Kumquats are not a common feature in produce departments -- the only other place I’ve ever found them in New York City is Chinatown. I never expected them in my local Gristede’s.

These kumquats weren’t the freshest I’d ever seen, but they looked more or less OK, so I bought them. Having polished them off over the course of a few days, I went back last night for another pint. The typically gruff cashier looked quizzically at them as she rang me up. She said she’d never had one, and seemed dubious when I told her the whole fruit is eaten -- everything but the seeds. The woman behind me in line volunteered that her grandmother used to eat them, but she personally didn’t like them.

They’re definitely an acquired taste. I remember eating a kumquat when I was a kid and thinking it was the most disgusting thing ever. They’re a sweet and sour, citrusy burst of flavor -- kind of like pulpy orange zest with a sweet kick. (My mom says they’re better bird food than people food.) 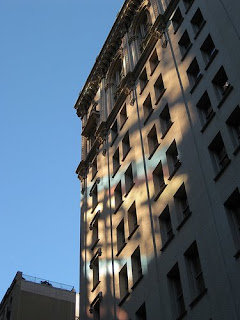 What’s especially funny about these kumquats is they’re grown in Dade City, Fla., which is about 20 miles from where I grew up. It’s pretty weird to be in New York and eating this little fruit that came from the soil of good old Pasco County. But apparently Dade City has become known as the Kumquat Capital of the World -- the town even has a Kumquat Festival, which I’m sure arrived after my own departure, as I never heard about it as a kid.

My mom’s next door neighbor has a kumquat tree, and when I’m home for Christmas I often dip into her yard for a handful of kumquats. (With permission, of course!) They’re terrific right off the tree -- and a lot cheaper than $3.99 a pint at Gristede’s!

(Photos: Reflections from the colored glass of the Westin hotel on the facade of the old New York Times building, W. 43rd Street)
Posted by Steve Reed at 11:12 AM