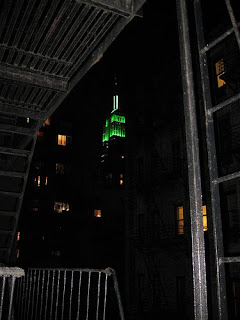 St. Patrick’s Day was pretty much off my radar yesterday -- I even forgot to wear green. But when I went out just after lunch to buy some tickets for a new Broadway play (“Mary Stuart,” about Mary, Queen of Scots) the streets were already filled with stumbling, guffawing 21-year-olds. Needless to say, I stayed in last night!

Do you ever have one of those days when you keep seeing weird stuff, and it occurs to you over and over again how bizarre the world really is? Of course, bizarreness is in the eye of the beholder, but that was the day I had yesterday. To wit:

-- New York is abuzz about a woman in the Bronx who was hit by an arrow as she was getting out of a car. The police think she wasn’t a target but was hit accidentally by an arrow fired from a nearby rooftop or park. How’s that for an obscure urban danger?

-- The snowy Swiss alps are enduring an onslaught of nude hikers. Locals are not amused.

-- On Flickr, there is an entire group dedicated to “sexy women with chocolate on their teeth.” (Admittedly it has only six members and three photos, all of the same woman.)

I guess it’s fitting that I should stumble onto this strangeness, as I’m reading “Joe Gould’s Secret,” a book I recently picked up at our company book sale. Joe Gould was a Greenwich Village character who wandered around homeless and claimed to be writing the longest book in the world, titled “An Oral History of Our Time.” Joseph Mitchell profiled him in 1942 for The New Yorker and then wrote this book -- pretty much an iconic portrait of New York eccentricity.

If Gould, a Harvard graduate, really did as he claimed, he would have been a blogger of sorts. He described how he got started on his oral history:

“In a second-hand bookstore, I had recently come across and looked through a little book of stories by William Carleton, the great Irish peasant writer, that was published in London in the eighties and had an introduction by William Butler Yeats, and a sentence in Yeats’s introduction had stuck in my mind: ‘The history of a nation is not in parliaments and in battlefields, but in what the people say to each other on fair days and high days, and in how they farm, and quarrel, and go on pilgrimage.’ All at once the idea for the Oral History occurred to me: I would spend the rest of my life going about the city listening to people -- eavesdropping if necessary -- and writing down whatever I heard them say that sounded revealing to me, no matter how boring or idiotic or vulgar or obscene it might sound to others.”

Sounds like a blog to me! Gould also fancied himself a poet. Here’s my favorite example of his work, titled “My Religion”:

See what I mean? Weirdness all around.

(Photo: Empire State Building from my apartment window on St. Patrick’s Day.)
Posted by Steve Reed at 10:10 AM