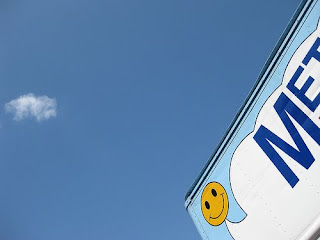 I had a great day yesterday, combining all the things I said I wanted to do Saturday but couldn’t. I ran errands in the morning, stocking up on Raisin Bran at KMart, where it’s $4.49 a box rather than a totally insane $6.50 at Gristedes. Then I promptly blew those savings and more on a photography book, “Store Front” by James and Karla Murray, whom I’ve met a couple of times at street art events. Great people, with a cute dog.

I went on a photography walk through Hell’s Kitchen, and stopped at the recently reopened Market Diner on 11th Avenue and 43rd Street, where I’ve long wanted to go -- it’s a very ‘60s building with a jagged roof and lots of plate glass. One of my better diner experiences, and I am a connoisseur of diners! I got banana nut pancakes, with plenty of pecans. Two thumbs up!

Then I met my friend Bill and we went to see “Impressionism” on Broadway, with Joan Allen and Jeremy Irons. It was a nice, basically unchallenging romantic play that wouldn't hold up to much critical dissection, but I like both Joan and Jeremy a lot. Really beautiful staging and art direction, which one would expect from a show called “Impressionism." I sat right behind Michael Musto and his very unusual looking, recently-laid-off colleague Lynn Yaeger, from the Village Voice.

Finally, I came home and caught up on some reading and on another episode of “The Jewel in the Crown.” I’m nearly finished -- one more disc to go.

(Photo: Maybe the happiest photo I’ve ever taken! A Metropolitan Hardware delivery truck in Hell's Kitchen, yesterday.)
Posted by Steve Reed at 9:51 AM